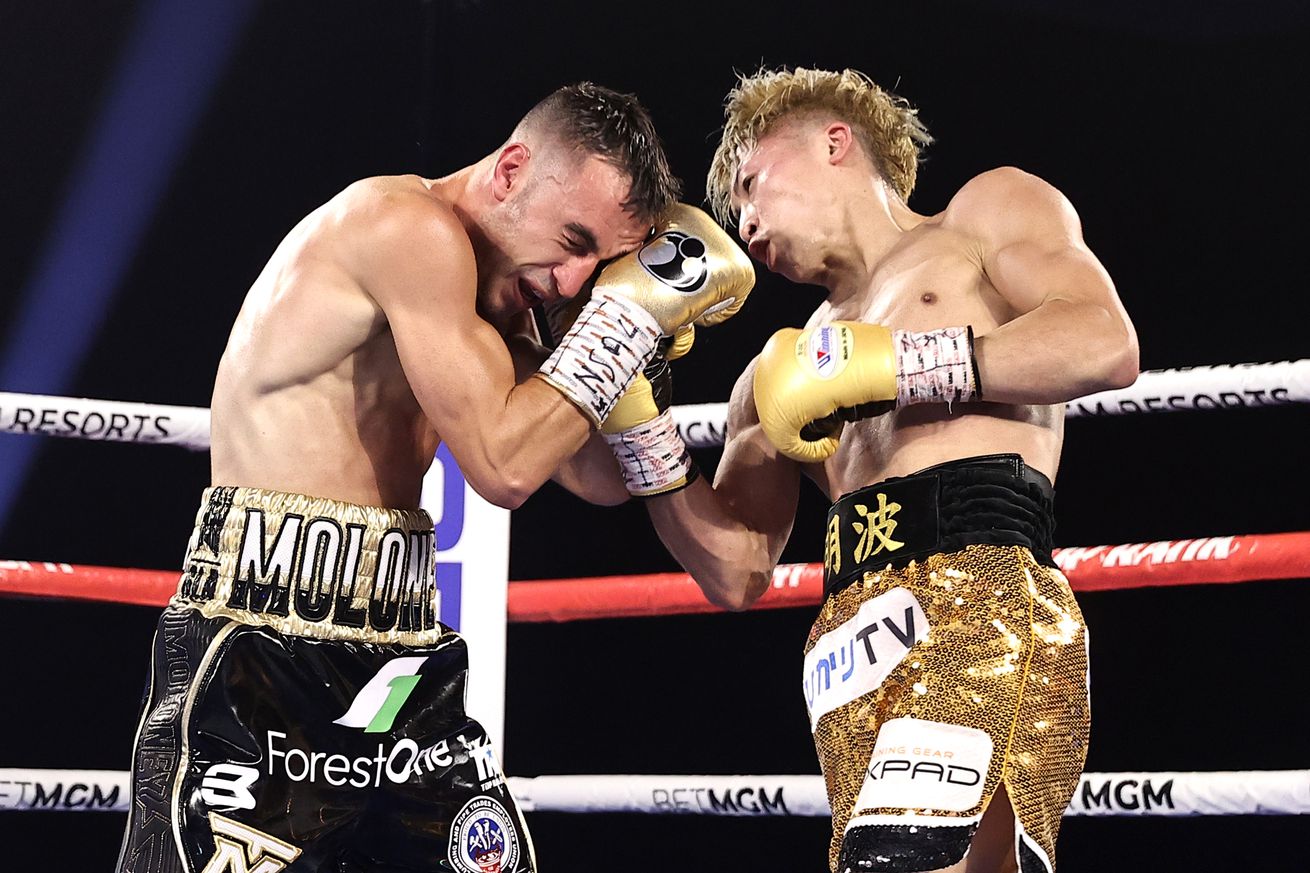 “The Monster’s” Top Rank debut was the mauling we expected.

Naoya Inoue’s return to action was worth the wait. The Japanese dynamo was his customary destructive self tonight, beating down and extremely tough and game Jason Moloney over seven rounds.

Inoue (20-0, 17 KO) immediately took control of the bout with lancing jabs, keeping the infight-happy Moloney (21-2, 18 KO) at bay during the first two rounds. Once the third rolled around, however, he seemed to shift into seek-and-destroy mode; while this gave Moloney opportunities to land the heavy hooks he’s known for, the Aussie simply lacked the power to budge Inoue.

Inoue had no such difficulties. He rattled Moloney with a pump-fake right cross in the fifth, then caught him swinging with a perfect check hook a round later for the fight’s first knockdown.

This counter left … @naoyainoue_410 drops Moloney early in Round 6, as his speed and aggressiveness has proven to be a lethal combo so far.#InoueMoloney | LIVE NOW on ESPN+ pic.twitter.com/oiMaufZVjx

In the closing seconds of Round 7, @naoyainoue_410 sealed a dominant performance like no one else in the Bantamweight division can. Beware. #InoueMoloney pic.twitter.com/CnABtOy8zS

We know, it happened in a flash.

Got your replays right here.

To his credit, Moloney did an admirable job of moving and holding to survive until the bell. Having found success with the counter, however, Inoue reverted to his jab-heavy pressure in the seventh. His offense ultimately prompted Moloney to load up on a right hand in the last 20 seconds, which Inoue met with a crushing cross that folded Moloney in a manner reminiscent of Ivan Baranchyk’s collapse against Jose Zepeda. Unlike “The Beast,” “Mayhem” remained conscious, but proved unable to rise under his own power. resulting in a TKO finish at 2:59.

“The Monster” will presumably look to once again set up a unification clash with WBO champion John Riel Casimero. The two were slated to meet in April before COVID intervened, and when rescheduling proved infeasible, Casimero stayed busy with a knockout of then-unbeaten Duke Micah. That one should be every bit the barnburner this one was.

@MikaelaMayer1 is wasting NO time. ➡️

Out to unify right away, @TerriHarper96 got the call-out before Mayer even got the WBO belt in her hands. #InoueMoloney | LIVE NOW on ESPN+ pic.twitter.com/KplR8Snzn0