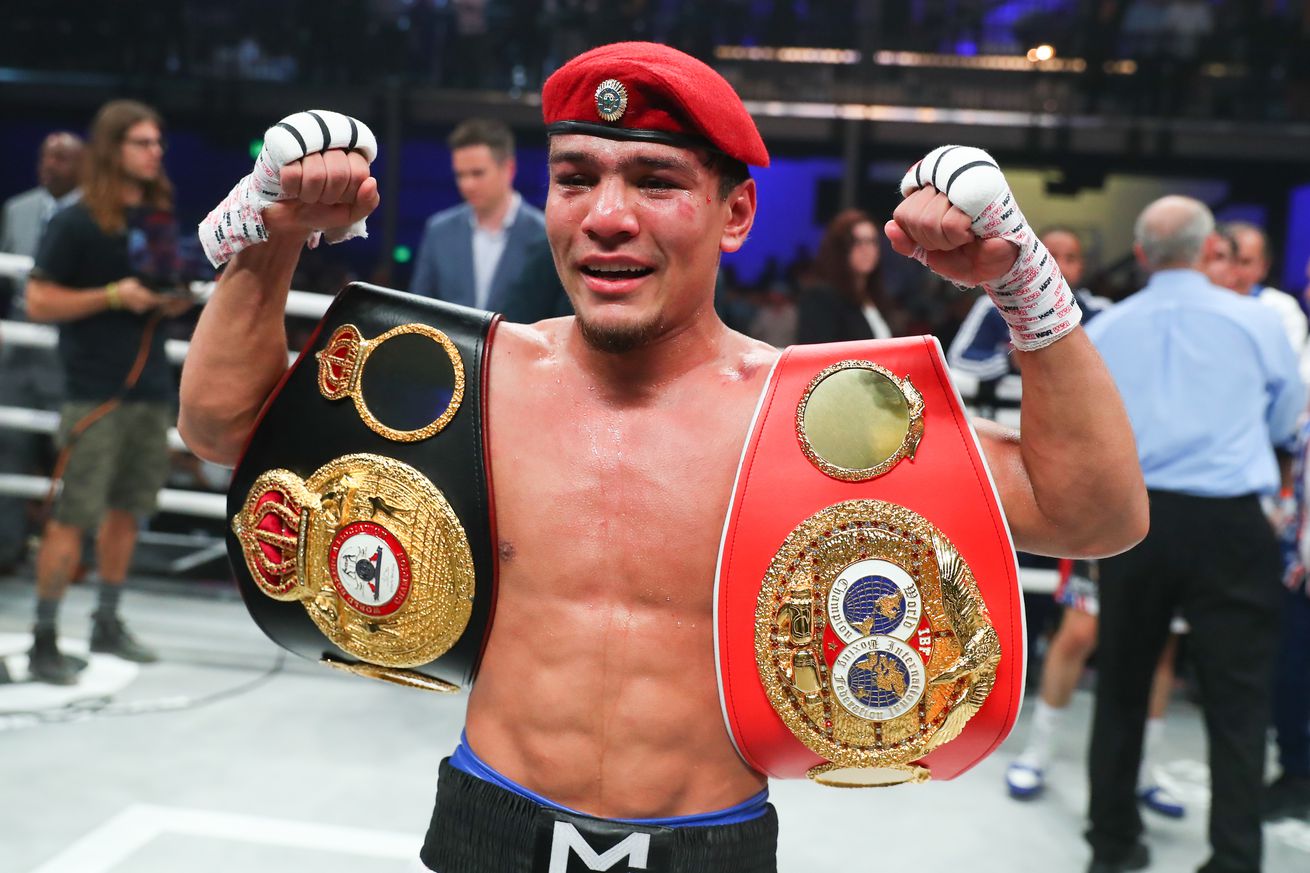 With two broken legs, secret boxing lessons, and an impoverished childhood fighting for survival, Murodjon Akhmadaliev’s road to championship glory has been nothing short of remarkable.

“I was told I would never walk again, certainly never box,” unified junior featherweight champion Murodjon Akhmadaliev confesses to me through his translator for the day, Aliko Frolov. “MJ’s” voice deepens with emotion as he begins detailing a childhood fraught with difficulties.

Since signing with DAZN and Matchroom Boxing last April, the southpaw’s career has exploded. Under the tutelage of Joel Diaz in Southern California, the 25-year-old has raced to world honors in just eight professional fights, the latest being an entertaining split decision win over Daniel Roman in late-January.

These recent successes were no fluke. Murodjon is adamant that they are a product of an arduous upbringing. Numerous hurdles were placed in front of his feet, while dreams of becoming a fighter continued to underpin his unabated etermination.

Aged nine, a young Murodjon would adopt the role of “man of the house” in an attempt to aid his father in making ends meet for the family. He lived a simple, penurious life with his mother, father and two sisters in Namangan, Uzbekistan, but consistently strived for more.

“We had nothing,” “Kaka” admits. “Kaka” was a nickname Murodjon adopted as a youngster, due to his adoration for football and specifically, the Brazilian playmaker.

“I would take any job I could find, whether it was helping the neighbors or hustling for errands. One summer, I got a job at a local theme park where visitors would get their photographs taken when they arrived. My job was to get these developed as quickly as possible for whoever purchased one. There were a few rival companies in the park doing the same thing, so I needed to be the quickest!”

A young Murodjon would run three miles to get the photographs developed and three miles back, often beating rival companies that had employees who would take alternative transport.

“The staff loved me because of this, and they kept giving me better jobs in the park each summer,” he confesses. Payment would be around two dollars for a day’s work, with Murodjon saving for weeks to buy a new pair of trainers.

At this age, his first love was football, but after a close friend defected to the local boxing gym, “MJ” followed and soon found himself falling in love with the sweet science. A small, skinny child, no weight class was low enough for Murodjon to participate in at tournaments, with the young Uzbek forced to wait until he was 11 to compete officially.

One day en route to work, Murodjon was run over by a car, breaking both of his legs. His desperation to sustain his employment saw him arrive at work, on time for his shift, with a bone sticking out of his leg and blood pouring.

“The manager was so angry. He called an ambulance, and I was rushed to the hospital. I couldn’t afford to lose that job,” he adds candidly. “I arrived at the hospital where the doctors told me of my injuries and instructed me to lay down and recover for eight months.

“I was helpless throughout this time, but kept faith that I could return to boxing, but more importantly, work,” he explains passionately, almost as if he felt he had something to prove.

Eight months passed, and despite strict instructions from his family and doctors, Murodjon returned to the boxing gym.

“I’d work until 5 pm and then secretly go off to the boxing gym afterwards. My mother gave me water and bread, so I would eat that after work, so I had the energy to train, and I’d arrive home by 7 pm. This happened for about half a year until my parents found out. They were angry, but after talking to the coach at the boxing gym, they realized I had a talent.

“I healed up fine from the injuries, but I struggled with foot movement for a couple of years afterwards,” he explains. Known as a heavy-hitter in his weight class, “MJ” cites these injuries as the primary catalyst for learning to trade inside the pocket with such force.

“I was very flat-footed and struggled to get around the ring. I knew I couldn’t outbox an opponent during my continued rehabilitation, so learning to sit down on my punches was a real benefit. I think this has helped me a lot as a pro. A lot of amateurs turn over and struggle to adapt to the hard-handed way of fighting.”

A torn meniscus a few years later would once again prove a considerable setback in Akhmadaliev’s progression. He was advised to stop boxing for the second time aged fifteen but continued to defy medical advice.

“These setbacks helped me a lot. I was always small and weak as a kid, and no one would give me any chances in anything. I was written off so many times, but for me, setting a goal meant I would always achieve it. I would never give up and had complete confidence in myself.”

A broken nose, broken ribs and broken fists would act as footnotes during Akhmadaliev’s climb through the ranks. No pain barrier was too high; no sympathy craved.

Success would shortly follow for Murodjon in the amateur code, winning silver at the 2012 World Youth Championships before scooping silver at the 2015 World Amateur Championships and Olympic bronze in 2016, all at bantamweight. Part of a new wave of Uzbek fighters, Akhmadaliev attributes his and his national team’s success to a collective drive and world-class coaching.

“Everything started with the originals,” he says, endorsing Uzbekistan’s former medal winners with evident admiration. “These guys were celebrities in Uzbekistan after their amateur successes. Abbos Atoev, Rustam Saidov, and Elshod Rasulov, to name a few. We wanted to follow in their footsteps and achieve similar greatness.

He’d also pay tribute to his teammates on the national team and the importance of their blossoming friendships. “We were all great friends on the team, which was so important. Guys like Israel [Madrimov] and Bakhodir [Jalolov]. There was healthy competition in the group which pushed all of us to our limits. If you’re not making weight you’re out of the team, there were fine margins which separated those who wanted it from those who needed it.”

“MJ” has taken to the pro game like a duck to water. Joining Leon Spinks as the only male fighter to become a unified world champion in just eight pro fights was a colossal accomplishment earlier this year, but he assures me that his story has only just begun.

“The best stories are ahead of me. I am pleased to be apart of DAZN and Matchroom Boxing, and I trust them to plot my next steps in the division.”

The unified champion expects to face his IBF mandatory Ryosuke Iwasa next, but is hungry for a test against WBO champion Emanuel Navarrete.

“This would be a great fight for me as our styles are so similar. We both come to fight, so there would be fireworks for sure. I gained so much experience in my win over Roman, and I am keen to continue pushing myself.”

There aren’t any detailed thoughts of moving up to 126 or even 130 pounds just yet, but Akhmadaliev is clearly motivated to follow in the footsteps of his idol, Manny Pacquiao, at some point in his career.

“First, I want to become undisputed at 122 pounds, then we’ll see. I feel strong at the weight, and maybe in the future, I can jump up.”

Murodjon Akhmadaliev has spent his whole life defying the odds in his quest for a better future. His flowering career is testament to the drive, determination and ambition he has shown throughout his 25 years, with quitting never proving an option.

“To anyone that doubted what I could achieve, I say ‘I told you so!’” he bellows with pride.

Despite speaking with me for close to an hour, he signs off with an endearing irony.

“I don’t like to do much talking. Over the next couple of years, the ring will show who is the best.”