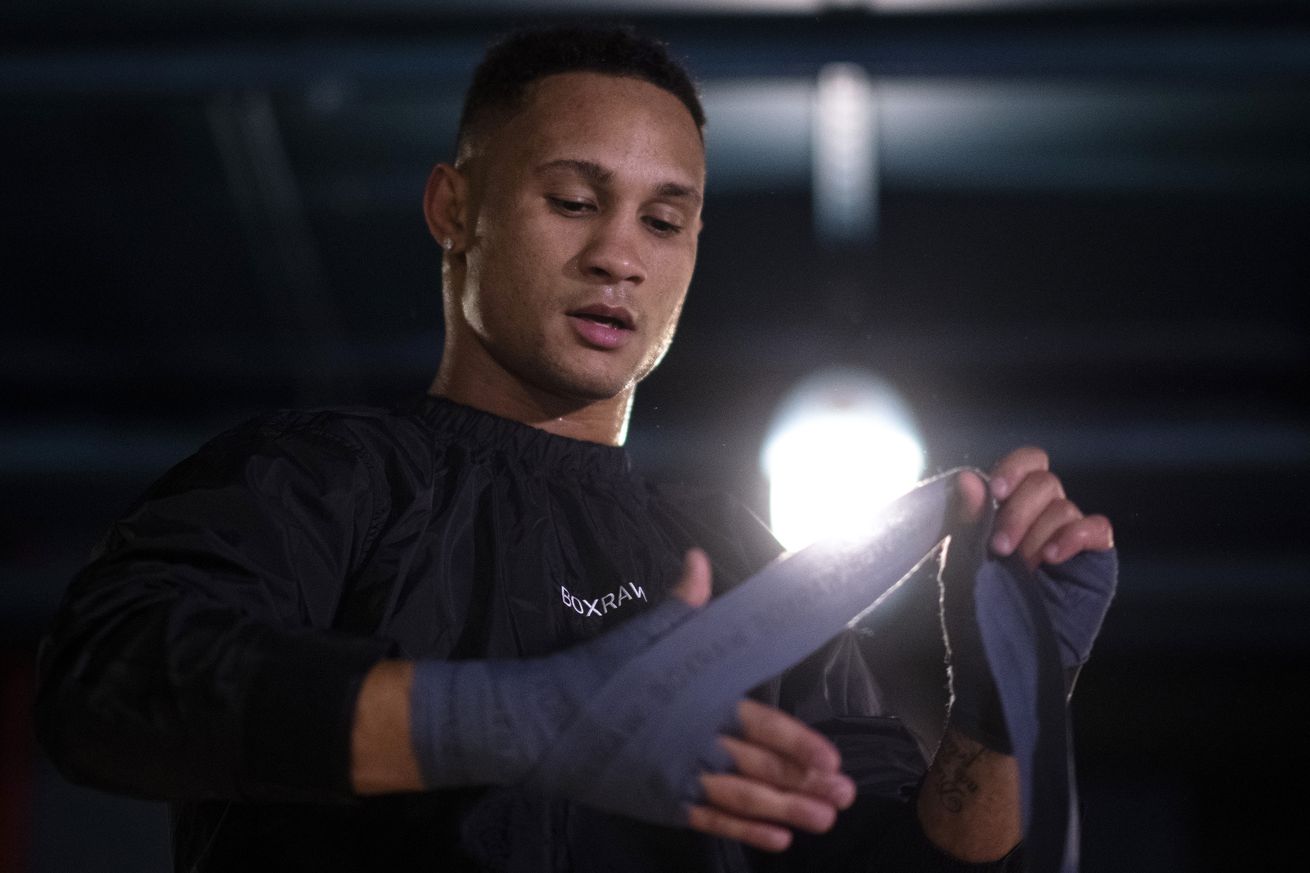 “Rougarou” is making his PBC debut on a stacked pay-per-view card, and tells Bad Left Hook that he’s ready to return to the top.

As the dust settles on this weekend’s Lomachenko–Lopez blockbuster, thoughts of the boxing world turn to Oct. 31, and a stacked afternoon and evening of fights proving more treat than trick this Halloween. Aside from the furor surrounding Davis–Santa Cruz, Inoue–Moloney, and Usyk–Chisora, Regis Prograis (24-1, 20 KO) is looking to make his own mark on the weekend’s action, returning to action following a lengthy layoff.

Prograis makes his PBC debut from inside the Alamodome in San Antonio, Texas, and his sixth appearance on a Showtime event, having previously featured on ShoBox cards. Juan Heraldez (16-0-1, 10 KO) is the man occupying the opposite corner in this 10-round junior welterweight clash, and the 31-year-old tells Bad Left Hook that he’s ready to dominate the 140-pound landscape once again.

“I’ve been training like a maniac,” the proud New Orleans native told me over the phone from the comfort of his home in Houston. “Rougarou” lives with his longtime trainer Bobby Benton and has trained consistently throughout a turbulent 2020, including regular sparring sessions.

“We’ve had our ups and downs,” he continued. “My grandfather died on Aug. 29 — which was also the anniversary of Hurricane Katrina — so now we have my grandma down living with us, so we are dealing with all of that as well. They were married for 50 years. They were each other’s soulmates and everything, you know. So, it’s a little up and down, but things are looking a little better now. Time heals all.”

Prograis is no stranger to adversity. Often citing Hurricane Katrina — the tropical cyclone that devastated New Orleans in 2005 — as an incentive for him to “grow up,” the former world champion understands how lives can change in a heartbeat. Speaking to the Guardian’s Donald McRae earlier last year, Prograis admitted, “I was 16, so it definitely forced me to grow up early. Looking back, it was the best thing that ever happened to me. It’s hard for me to look at it as a bad thing because so much good came out of it. It changed my life for the better.”

Now, the father of two is keen to look forward — inside the ring as well as outside. The Prograis family are set to move from a quartet to a quintet in a fortnight’s time, with baby number three due the day before his ring return. This, however, hasn’t given him any extra incentive to put on a show in Texas — his mind is focused and his tools sharpened.

“I’m more motivated for this fight because the card is so big. It’s a big, big opportunity for me with PBC and it’s a new chapter in my career. The baby doesn’t give me any more motivation because I am already fully focused on this fight, you know?

“I don’t know too much about [Heraldez]. I’ve watched him on YouTube a few times, and a few fights. But I don’t believe he is on my level. I am still not going to take him lightly. I’ve trained too hard for that. I think since my last fight I’ve stepped it up so much, training my ass off. I’m training 3-4 times a day, and I want to be back on the top again. I was the No. 1 at 140 pounds for a long time, and I have to get that spot back again. I see this fight as another step to becoming a champion once again.”

The Alamodome will see fans in attendance in the US for the first time since the sport shut its doors in March due to the COVID-19 pandemic. Tickets will be released in “pods” with all in attendance required to wear a face mask and screened upon entry to the arena. The capacity while adhering to social distancing guidelines is unclear, but around a quarter of the usual capacity 64,000 is expected on Halloween night.

Prograis is delighted to be given the opportunity to fight in front of a crowd. Bubble-life hasn’t been for everyone, and he’s wary of the upsets that have occurred behind closed doors.

“I’m so excited to return, and the fact it’s in front of fans makes it that more special,” he continued. “I actually had three or four fights lined up previous to this. I had the fight with Maurice Hooker which I was in training camp for twice, and then I had a fight lined up with someone else. People were asking me, ‘How do you feel about fighting in the Bubble?’ and to be honest, I wasn’t really looking forward to it. But we are professionals. We get paid and we gotta do what we gotta do, but I just wasn’t looking forward to it so much.

“But now, knowing that we have fans allowed is great news for me, and I’m just excited that I am in this spot. The fans always give you extra motivation; I feel like when you’re inside the Bubble, it’s just like glorified sparring — if you take things lightly no one is screaming or anything.”

371 days out of the ring is a long time for any professional, but such is life in a pandemic, and Prograis has used this time wisely. We haven’t seen him in action since his 2019 Fight of the Year contender against Josh Taylor inside London’s O2 Arena, a night that has changed the former champion for the better.

“I learned a shit ton about myself, man. First off, I still think I won the fight, but I don’t go around saying I got robbed or anything like that. I really feel like if it was here [in the US], I would have won it. Still, it was a very, very close fight, and you know, he deserved it that night. It’s water under the bridge now; I’m over it. For me, I got where I was at for being so dominant, and I have to get that dominance back again.

“One thing I did, which was a mistake, was moving to LA. I was out there for like two weeks of my training camp, and when I was out there, I did nothing in terms of training. I love LA, but I lived on vacation when I was there. Here, in Houston, Texas, I live in training camp 24/7. It’s just a different mindset.

“That was a big mistake from me. I enjoyed myself for that year, but now I am back in Texas and back to business. When I am home, I train. Even if I don’t have a fight coming up, I will train.

“Inside the ring, I fell asleep in the middle rounds; I know that. I think that was the difference in the fight. It was a learning experience, and now it’s just made me hungrier to get back to the top again. That’s why I’ve been training so hard.”

Prograis lost a tight majority decision that night in London, in an action-packed fight with brutal rounds throughout. It was a tough one to score, but the decision hasn’t put Regis off a return to the UK in the future. Lewis Ritson (21-1, 12 KO) is a name in the junior welterweight division that has been touted for the American in a return across the Atlantic, but after the controversial scorecards that saw “Sandman” pick up a win over Miguel Vazquez this past weekend, you couldn’t blame “Rougarou” for any hesitation in giving away home advantage.

Despite not watching Ritson–Vazquez at the weekend, Prograis was locked into “The Takeover” in Las Vegas, as Teofimo Lopez stunned the world in solving the Lomachenko puzzle over 12 rounds. Prograis and Team Lopez have crossed paths in the past, and all parties seemed to welcome a future contest at 140 pounds once Teofimo has made the expected leap up from lightweight.

Bumping into each other at a previous Top Rank show, “I spoke with his dad about a fight in the future”, he explained. “Lopez Sr said, ‘After we whip Loma’s ass, we will come to fight you – that will be a big money fight.’ And hey, if that’s what they want to do, let’s do it. I definitely welcome the challenge.

“But as far as the fight went at the weekend, I knew he was going to beat [Lomachenko]. He shut him down. I won’t say that Loma was just a load of hype — he’s good, he’s great — but I don’t think he’s as special as some people thought. There were people in the gym that were comparing him to people like Pacquiao, Floyd, Sugar Ray Leonard and those type of guys, but I didn’t see that in him. He was hyped up by the television networks and stuff like that, but I never believed he was that great. Teofimo proved it. He showed it on Saturday night. I thought it would happen, but not like that – I’m not gonna lie. I had Teofimo up 7-0 going into the eighth round, and then down the stretch, there was a lot of pick ’em rounds that I still think Teo won most of.

Assuming Prograis passes the test of Heraldez next weekend — he’ll be a sizable favourite when the bookmakers release their odds — 2021 should prove to be a big year in which all comers are welcome. Fighting on the “other side of the road” to the Top Rank champions in the 140-pound division brings its difficulties, but Regis is confident of returning to the top of the pile before a move to 147. But as is common in prizefighting: if it makes money, it makes sense.

“With the landscape of boxing, you never know what is going to happen — it changes so quickly. A lot of upsets have been happening, so you just never know what’s around the corner. I know I want to be a champion again at 140 before I move up to 147. That’s just my personal goal. If I’m offered a crazy amount of money to move up to 147 then hey, I’m moving up. But I want to be a two-time champion at 140 and then take over at welterweight.

“When I move up, I’ll go where the belts are. For me, at the moment, Errol [Spence] is the best at 147, but over at PBC you have Pacquiao, [Danny] Garcia, [Keith] Thurman, all the big names. Everyone except Terence Crawford, but everyone else is over there. I think all of those fights could be made for me at 147, but let’s see what could happen.”

He’s also spoken publicly about a potential bout with Adrien Broner at 140 pounds. Regis speaks confidently about becoming the first to stop “The Problem” and can see the marketing benefits of taking on such a big “name” in the sport.

True champions learn, adapt and react to setbacks in their career, and Prograis is adamant he will prove this notion correct on Oct. 31. While the conversation at 140 pounds has temporarily moved towards Josh Taylor and Jose Ramirez, he is pinpointing 2021 to prove his capabilities to climb the mountain to the very top once again.

Prograis is known as an avid reader and a true consumer of boxing literature. Next Saturday, the 31-year-old is looking to pen the opening lines to the next chapter in his career — he’s convinced me that his story is far from over.