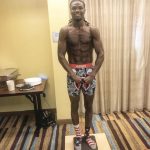 Super middleweight prospect Isaiah Steen has a lot in common with his step-brother Charles Conwell. Both are unbeaten, push each other in the gym and are prospects in a weight division with a lot of talent.

While Conwell has excelled as a prospect in the junior middleweight division, Steen hopes to carve out his own path towards contender status at 168 pounds.

Steen will face gatekeeper Juan De Angel Friday night at the Marriott Clearwater in Saint Petersburg, Florida. The six-round bout will precede the main event bout between junior welterweights Kari Reis (16-7-1, 5 KOs) of Providence, Rhode Island and Calgary’s Kandy Wyatt (10-1, 3 KOs). Both will be fighting for the vacant WBA title.

Steen (14-0 1 ND, 11 KOs), who resides in Cleveland, Ohio, last fought on February 8, stopping Kenneth Council in the opening round. The win was their consecutive victory since fighting to a No Decision against Tyi Edmonds in December 2018.

The 24-year-old was scheduled to return to action on a ‘ShoBox’ telecast on October 7, but his fight was cancelled after opponent Kalvin Henderson withdrew from the fight due to a non-COVID illness. Conwell would end up fighting in the main event, stopping Wendy Touissant.

Steen, who is co-promoted by Lou DiBella and Tony Holden Productions, is managed by David McWater, who has also guided the career of now-undisputed and Ring Magazine champion Teofimo Lopez.

De Angel (22-12-1, 20 KOs) knocked out journeyman Reynaldo Esquivia in round 3 of his last bout on October 26 of last year. The fighter from Barranquilla, Colombia had lost seven of his previous eight fights, including losses to Antoine Douglas, Austin Trout, Immanuwel Aleem, and unbeaten Chordale Booker.

Unbeaten heavyweight Elvis Garcia (8-0, 5 KOs), who is from Xalisco, Mexico and is now being trained by Joel Diaz in Indio, California, will square off against Dell Long (7-6-2, 4 KOs) in a six-round bout.

Former amateur standout Jeremiah Milton (1-0, 1 KO) will face D’Angelo Swaby (1-1, 1 KO) of the Bahamas in a four-round bout. Milton, who is originally from Tulsa, Oklahoma and now resides in Las Vegas, has sparred the likes of Luis Ortiz, Joe Joyce and prospect Guido Vianello.

Featherweight Carlos Arrieta (13-0, 8 KOs) of Puerto Rico will square off against Nicaragua’s Julio Buitrago (13-24, 3 KOs) in a six-round bout.

Clarence Booth (17-4, 9 KOs) will fight for the fourth time as a pro in his hometown of Saint Petersburg when he faces Rondale Hubbert (13-14-2, 8 KOs) of Fargo, North Dakota in a six-round bout.