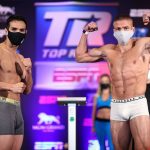 Ivan Baranchyk and Jose Zepeda could possibly be one win away from challenging for a world title fight. That win will have to come at the expense of the other in what could be a stellar back-and-forth war between the two junior welterweight contenders.

Baranchyk and Zepeda will square off Saturday night at the MGM Grand Conference Center in Las Vegas, Nevada. The 10-round bout will stream live on ESPN+ (7:30 p.m. ET/ 4:30 p.m. PT).

The fight between the two was originally scheduled to take place on July 7, also at the MGM Grand Conference Center, but Baranchyk pulled out of the fight about two weeks prior due to a rib injury. The injury reportedly took place during a sparring session.

Boxing fans breathed a sign of relief when the fight was rescheduled in late August. Both fighters are boxer-punchers with modest power, and will stand in the pocket that will sure to produce exciting exchanges between the two.

A lot is on the line for Baranchyk and Zepeda, who are both ranked No. 4 and 6 by The Ring, respectively. A sanctioning body also has both fighters in the top 10, with Zepeda at No. 2 and Baranchyk at No. 6.

Zepeda (32-2 1 NC, 25 knockouts), who was grew up in the Los Angeles suburb of La Puente and now resides in Mexicali, Mexico, faced late-sub Kendo Castaneda on July 7, winning by unanimous decision. The 31-year-old notched an impressive win in his previous fight on September 14 of last year, defeating former two-time world titleholder Jose Pedraza by unanimous decision.

The 31-year-old almost pulled off an upset victory on February 10 of last year, losing to unified world junior welterweight titleholder Jose Ramirez by majority decision. Even in defeat, Zepeda saw a silver lining in the loss.

“I have gained a lot of experience by fighting guys like (Jose) Ramirez and ‘Sniper’ Pedraza,” said Zepeda, who is co-promoted by Top Rank and Zanfer Promotions. “Those guys have been world champions. It was a great experience being in the ring with them. The experience counts a lot.

Baranchyk (20-1, 13 knockouts), who is originally from Amursk, Russia and now resides in Miami, Oklahoma, last fought on October 5 of last year, knocking out Gabriel Bracero in round 4. The fight took place almost five months after losing to Josh Taylor, who won the IBF title from Baranchyk.

The 27-year-old is confident a win over Zepeda would put him in line to face Ramirez.

“This is the best division,” said Baranchyk at Thursday’s press conference. “This fight is very important for me because it will be my next step towards a world title opportunity. If we win this fight, maybe I can get the chance to challenge Ramirez.”