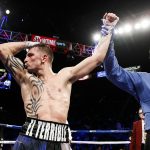 Ivan Redkach pulled off his own upset victory Saturday night.

Fighting for the first time as a welterweight, Redkach stopped former 140-pound titleholder Devon Alexander in six rounds at the Soboba Casino Resort in San Jacinto, California. The official time was 1:10.

With the win Redkach, who entered the bout as underdog, improves to 23-4-1 (18 knockouts). The hard-hitting southpaw had won his last two fights since a knockout loss to John Molina, but he was without trainer Jose Santa Cruz (father of WBA featherweight titleholder Leo Santa) who underwent emergency surgery recently and continues his battle cancer.

Alexander, who split from trainer Kevin Cunningham and was trained by Roy Jones, Jr., had not fought since losing by split decision to Andre Berto on Aug. 4.

From the opening bell, Alexander was the more effective fighter, utilizing his ring generalship to connect with straight left hands to the head. Redkach did find success in spots, but it looked as though Alexander was dictating the pace.

With about 30 seconds gone in Round 6, a well-timed left uppercut dropped Alexander. The former titleholder did beat the count but went down again moments later from a sweeping left cross to the head. Alexander rose again but a sustained barrage of punches prompted referee Thomas Taylor to wave the fight off.

“We were ready for this fight,” said Redkach, who had former multi-division world titleholder Shane Mosley in his corner. “I knew he was not going to get up. We work on that punch every day in the gym.”

“I told him to get in there and knock him out,” said Mosley. “Not just win but knock (Alexander) out.”

Asked who he would want to fight next, Redkach, who is originally from the Ukraine and now resides in Los Angeles, singled out WBC welterweight titleholder Shawn Porter, who was sitting ringside.

“I want to fight anyone. Even Shawn Porter,” he said.

The southpaw Monroe mixed feinting and countering with taking the initiative and landed straight left hands to the head. Centeno was effective when he pressed the action but only did so in spots.

“I think I stepped it up,” said Monroe after the fight. “I wanted to press the action because I wanted to win the rounds convincingly. My right is special, and my left is dangerous. I want to fight Jermall Charlo.”

In the opening bout on the ‘PBC on FS1’ telecast, heavyweight Rodney Hernandez (13-7-2, 4 KOs) scored an upset on paper, knocking out previously unbeaten Onoriode Ehwarieme (17-1, 16 KOs) of Nigeria in the opening round.

A left cross to the head dropped Ehwarieme face-first to the canvas. The stricken fighter beat the count, but referee Rudy Barragan halted the action at 2:59.

In other action junior featherweight contender Marlon Tapales (33-2, 16 KOs) of the Philippines knocked out Roberto Castaneda (23-12-2, 16 KOs) of Mexico at 1:37 of Round 3. Tapalas is a former WBO bantamweight titleholder.

Unbeaten featherweight Jhack Tepora of the Philippines defeated Bakersfield’s Jose Luis Gallegos (16-7, 12 KOs) by unanimous decision. All three judges scored the bout 99-91 in favor of Tepora who improves to 23-0, 17 KOs.

Francisco A. Salazar has written for RingTV.com since October 2013. He can be reached by email at santio89@yahoo.com or on Twitter at FSalazarBoxing