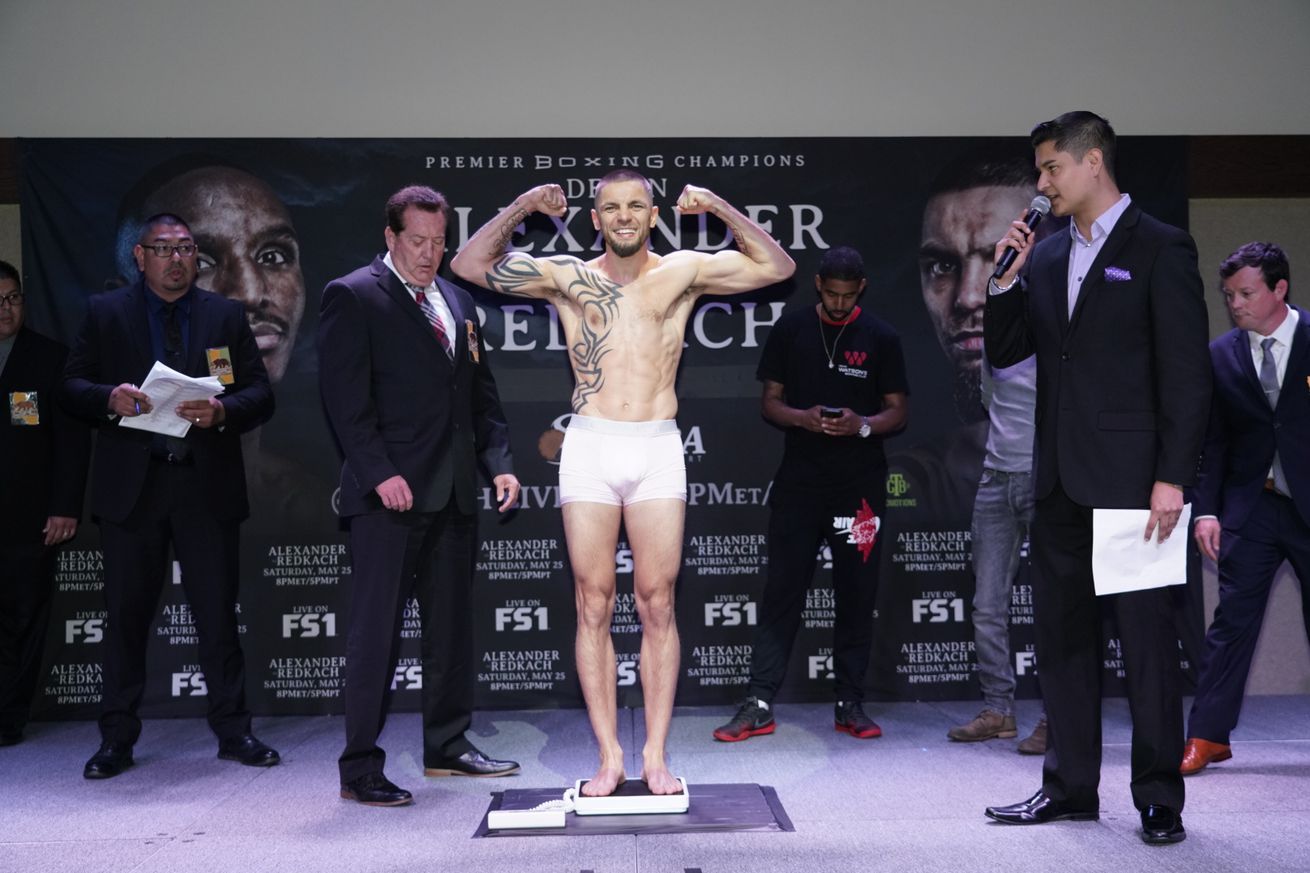 The first five rounds were the usual Alexander (27-6-1, 14 KO) clinch-heavy affair, complete with headbutts that Redkach (23-4-1, 18 KO) repeatedly complained about. Both men did solid work with body shots and jabs, keeping the fight close until a brutal uppercut and chopping left sent Alexander face-first to the canvas in the sixth. “The Great” got back to his feet, only to get dropped again with a left hook as the referee was about to separate a clinch. A 1-2-3 greeted him when he got back up and the third knockdown led the referee to stop it.

It’s a career-best win for Redkach, who’d been mostly written off after persistent struggles against top opposition. Alexander, meanwhile, is now just 1-4-1 in his last five fights and suffers his third consecutive misfortune after questionable judging against Victor Ortiz and Andre Berto.

Willie Monroe Jr. out-slicked Hugo Centeno Jr. in the middleweight co-feature, leaning on his jab, good infighting, and a nice little check right hook. Centeno (27-3, 14 KO) had his moments in the middle-to-late rounds, landing his straight right and some good rights in the clinch, but Monroe’s consistent output kept Centeno from ever getting full control. Though the punch stats were razor-thin, Monroe’s efforts in the early and final rounds looked to be enough to earn him the decision and the judges agreed, giving him the UD on scores of 98-92, 97-93, and my own score of 96-94.

The opening bout’s quick finished allowed prospect Jose Balderas some airtime against fellow unbeaten Julio Garcia. He made the most of it, scoring four knockdowns en route to a fourth-round stoppage. A lead overhand right sent Garcia (3-1, 2 KO) to the canvas in the third, after which Balderas (7-0, 2 KO) shifted focus to the body for the eventual finish.

Nigerian heavyweight Onoriode Ehwarieme’s showcase bouts in the main card opener did not go as expected, as journeyman Rodney Hernandez put him away late in the first round. The first two minutes mostly consisted of Hernandez (13-7-2, 4 KO) dipping his head, stepping in, eating uppercuts, and finally getting shoved away by the much taller Ehwarieme (17-1, 16 KO). In the waning seconds, however, Hernandez answered the shove with a short left hook to the jaw that discombobulated Ehwarieme, then a shot to the ear as the Nigerian fell to his knees. Ehwarieme beat the count, but was wobbly enough that the ref elected to call it.

I’m not sure I agree with the stoppage, especially since there was one second left in the round, but Ehwarieme was definitely unsteady.

The Fox Sports 2 prelims saw no surprises, as A-sides Jhack Tepora and Marlon Tapales picked up comfortable victories over Jose Luis Gallegos and Roberto Castaneda, respectively. Both men previously held world titles, only to lose them on the scales.

Tepora (23-0, 17 KO) and Gallegos (16-7, 12 KO) were fairly even through the first few rounds, seemingly fighting in alternating bursts, but Tepora’s power and craft started to assert themselves once the middle rolled around. Gallegos’ moments of control became increasingly rare, but despite both men waving the other on, neither man was able to send the other to the canvas. Tepora ultimately won the entertaining bout with a trio of 99-91s.

Castaneda (23-12-2, 16 KO) was 3-10-1 in his previous 14 fights and absolutely looked it. His arm punches had nothing on them, making his six-inch reach advantage a non-factor as Tapales (33-2, 16 KO) stepped inside at will. “The Maranding Nightmare” was free to sit down on all of his punches, sending Castaneda to a knee with a hard right hook in the first round and punishing him with hooks, straight lefts, and body shots until the referee intervened.