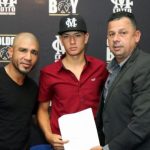 The 18-year-old Saavedra, who resides in Delicias, Mexico, began fighting at the age of six. Accumulating an amateur record of 91-8, he was a five-time Golden Gloves tournament winner in his home state of Chihuahua.

“We are very proud and excited to sign Jaime Saavedra along with Golden Boy Promotions,” said Cotto in a press release. “Mexico has a legendary tradition in professional boxing and Jaime is our first Mexican fighter (we signed to our company).”

“This young man is something special. He has talent and had a great career as an amateur with a pro-style. We are very enthusiastic about watching him fight in his pro debut.”

Hector Soto, who is the Vice President of Cotto Promotions, agrees. “I’ve been watching Jaime over the last two years,” he said. “He is definitely a special talent. We have been interested in him since we met him, and the moment has arrived where we work with him and his family. Jaime has it all to have success in boxing.”

Saavedra will make his pro debut on June 29 in Cancun, Mexico on a co-promotion between Cancun Boxing and Pepe Gomez.

Saavedra, who will turn 19 on Nov. 14, is excited to have signed this promotional deal and will set his sights on the ultimate goal.

“I feel very good,” said Saavedra. “It’s a great satisfaction. My dream is to become a world champion and I hope that happens.”

The plan for Golden Boy and Cotto Promotions is to have Saavedra compete in the junior lightweight division.

Francisco A. Salazar has written for RingTV.com since October 2013. He can be reached by email at santio89@yahoo.com or on Twitter at FSalazarBoxing