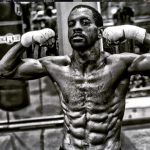 This period of living is unlike anything anyone alive has experienced, it should go without saying, but maybe we need reminding of that more often than we might think.

Humans are wired to crave a certain degree of order and structure and operate better, mostly, when they have a reasonable assurance of security. COVID-19 making the rounds impacts all those wants, and gums up the works of most anything it touches. It’s a good time to be a bio-tech company with a head start on crafting a vaccine to combat the virus, but apart from that, these are challenging times.

For boxers, too, of course. You can make plans, you can aim for a goal, and get amped for a fight that has been set up for you. You can do your training, stay away from the fridge, wear your mask when appropriate and feel ready to rumble. And then the plans change, really, they explode in your face, when you test positive for COVID-19. This scenario could be called “The Jamel Herring Story (Coronavirus Chapter).” The Long Island, New York native has dealt with harsher realities, frankly, than twice having a fight with Jonathan Oquendo called off, because of coronavirus. But that doesn’t mean he doesn’t feel expected emotions when he’s told that the pandemic is impacting him up close and personal.

If you need a refresher, here goes. The 34 year old Herring, holder of the WBO 130 pound title, readied himself to defend the strap against Oquendo July 2, on ESPN. The proud Marine, who did two tours in Iraq before he captained the US Olympic squad in 2012, tested COVID positive, though.

Herring (click for record) healed up, his immune system did its job, and when a doc gave him the thumbs up, he informed promoter Top Rank that he was good to go. The Las Vegas fight company penciled in the Herring vs. Oquendo scrap for July 14, to run on ESPN during prime time. Herring while training in Colorado did a COVID test, and passed. Then, he came to Las Vegas, and had a COVID test there, on July 12. He got word the next day, July 13, that he tested positive. Again, the fight with Oquendo (31-6; age 36) got scratched.

He was bummed, to put it mildly. You can understand that, another camp wasted, making weight for nothing…and yeah, boxers are independent contractors, not salaried sorts. No fight, no moolah. He’s like the most of us, knows holders of the mortgage and landlords don’t so much care about why the check is late, the just want the damn check.

But Herring cycled through disbelief and frustration rather quickly. He came to an “it is what it is” POV admirably quickly. That’s the Herring I spoke to on Thursday.

“I’m scheduled to return I believe September 3rd,” Herring told me, “so that’s plenty of time to shed anything out of my system. I’m just eager to get back in the ring.” Thursday offered up a big batch of news, with the comeback of Mike Tyson plopped onto my plate. So I checked in with Herring again, on Friday afternoon, to see if anything had changed. (This is necessary today more than ever, things change inside and outside the boxing sphere more often and faster than is typical, right?)

“Nothing new as of now,” Herring, whois trained by Brian McIntyre, informed me. “I’ve heard my date could change from the 3rd to the 5th, which is a Saturday. No word if I’m still fighting Oquendo or someone else though.”

One reason I follow this person and this story heavily is because I see Herring as a role model. The way he’s handled himself in life, with strength and dignity, it informs me, helps guide me when I find myself lagging in energy or resolve. The uncertainty, that’s a mental drain on me. I have kids, age 9 and 13, not knowing what their schooling situation will be come early September, that messes with me. But this is a large club I’m in. It doesn’t feel that way, often, because our political system and the preferred strategies of media in America encourage division, but yes, we are in this together. So, I feel for a Herring, because I empathize with not knowing how to make the ends meet at the end of the month.

I also try to remind myself that really, just about everybody is doing the best they can. That goes for the people who’ve been charged with overseeing that first run of shows in that “Bubble,” in Vegas. Nevada commission executive director Bob Bennett has had almost a thankless task of readying a protocol, and making sure it’s adhered to, and doing as much as he can, with his staff, to keep everyone who entered that bubble safe.

I was happy to get some talk time with Bennett about a week ago. He made quite clear to me, the commission policy has been and will be better safer than sorrier. “The science is not absolute,” he pointed out. So even if I see a story or research which suggests that once someone has COVID, it’s probable that they possess antibodies which make them a safe bet to not fall prey to the virus’ rampage, he can’t and won’t succumb to taking a chance and deciding that COVID will behave itself. No, it’s better to assume that coronavirus is most mercurial and diabolical…and make decisions erring on the side of caution. Bennett told me sympathizes with the frustration Herring felt. “But we have to look at the big picture,” the ex FBI man said. And that means worrying not just about the main event fighters, but all the boxers, trainers, support staff and commission personnel who worked to get boxing going again. So, until it is proved, hardcore and without dissent, that someone cannot get re-infected, after once battling off the virus, Bennett will stay his course, leaning toward being extra cautious.

Back to Herring; I’m not making it seem like this guy is just like the pugilistic Dalai Lama, and stays in a cocoon of serenity while he adapts yet again to this new era of uncertainty.

The Dalai Lama, in typical mode, rolling with the punches. Jamel Herring tries to model that mindset.

Thinking a pay check is coming, and then seeing it vanish into the air, it’s no fun. “It sucks,” Herring admitted. “You basically gotta start a whole new training camp all over again. But I want to make clear I’m not upset with the Nevada commission, I always weigh the good with the bad. We’re living in crazy times, and dealing with a virus that we’re still learning about. With that being said, I can’t fault them for taking precautions, because people and their health will always come first before a fight. I’m just happy to see that my team and Top Rank had my back throughout everything. Like I’ve stated before, they did everything in their power to save the fight, but the commission did what they felt was right. Overall, this could be a blessing in disguise, and what I mean by that is, since I’ve been home resting, I’ve been feeling more and more like my old self again. When it’s time to get back in the ring I’ll be more fully prepared for anything than I would have been on the 14th of July. I’m just glad I’ll get another chance to stay busy throughout this pandemic in 2020!”

The post Jamel Herring again looks forward, this time to a re-reset bout appeared first on The Ring.