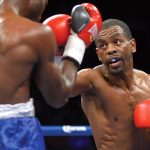 The 12-round bout will take place at the MGM Grand Conference Center in Las Vegas, Nevada and will air live on ESPN and ESPN Deportes (9 p.m. ET/ 6 p.m. PT).

In the co-feature, undefeated Mikaela Mayer will face Nigeria’s Helen Joseph in a 10-round junior lightweight bout.

Both Herring and Mayer were originally scheduled to fight in Las Vegas on ESPN telecasts, but both tested positive for COVID-19 leading up to their respective fights. Both have since tested negative and were eager to get back in the ring. Herring was scheduled to fight Oquendo on July 2.

“Jamel and Mikaela wanted to come back as soon as possible, and we were happy to oblige them,” said Top Rank chairman Bob Arum. “They are healthy and ready to put forth tremendous performances.”

Herring (21-2, 10 knockouts), who was born and raised in Coram, New York and represented the United States at the 2012 Olympic Games in London, made the successful defense of the WBO title in his last bout on November 9, defeating Lamont Roach by unanimous decision.

The southpaw Herring won the vacant WBO title by defeating Masayuki Ito on May 25 of last year. Herring has made it a point to wanting to unify the world title belts at 130 pounds, but is not overlooking Oquendo.

“I am back, healthy and 100 percent ready to defend my world title,” said Herring, who served two tours of duty in Iraq as a U.S. Marine. “Oquendo is a tough opponent who realizes this is his last chance to win a world title. He’s coming for what I have and I’m not going to cut any corners. I will return home to celebrate with my family and my belt.”

Herring is trained by Brian ‘Bomac’ McIntyre and is ranked No. 3 by The Ring.

Oquendo (31-6, 19 KOs), who resides in Vega Alta, Puerto Rico, defeated Charles Huerta by unanimous decision in his last bout on November 14. In his previous bout on May 4 of last year, Oquendo lost by unanimous decision to Roach in a close fight many ringside writers thought he did enough to win.

“We know Jamel is a slippery, tall, left-handed fighter who has an advantage in range, but we are working for that and we know that we will have no problems,” said the 36-year-old Oquendo. “My company knows how hard I fight and how hard I train. Fans like Jonathan Oquendo because he makes for great fights.”

Oquendo has also suffered losses to then-WBA featherweight titleholder Jesus Cuellar in December 2015 and to Abner Mares in July 2014.

Mayer (12-0, 5 KOs), who grew up in the Los Angeles suburb of Woodland Hills and now resides in Colorado Springs, Colorado, was scheduled to face Joseph on June 9 before withdrawing from the fight two days before the fight. Mayer immediately tested again and tested negative.

In her last bout on October 26, the 2016 U.S. Olympian forced Alejandra Zamora of Argentina to remain on her stool after the sixth round.

“After having two fights canceled because of the COVID-19 pandemic, I am relieved and excited to be back and grateful to Top Rank for getting me back on a card so quickly,” said the 30-year-old Mayer. “I’m not the fighter you last saw in October. I’ve had three camps to peak myself and grow as an athlete. A whole new fighter is stepping in that ring on July 14, so I hope Helen is ready.”

Also on the ESPN telecast will be Clay Collard (7-2-3, 2 KOs) of Cache Valley, Utah squaring off against Lorawnt “LT” Nelson in a six-round middleweight bout.

Nelson (5-3, 4 KOs), who is originally from Pietermaritzburg, South Africa and now resides in Arvada, Colorado, lost to unbeaten Shawn McCalman by unanimous decision in his last bout on January 24.