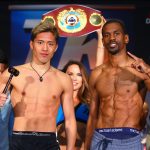 To say Jamel Herring has faced adversity is an understatement.

Whether it was his two tours of duty in Iraq about a decade ago or losing two fights within a span of 14 months, Herring has managed to overcome obstacles and move forward with his life.

And he does it with a smile on his face.

Herring believes his mental toughness from serving in the Marine Corps, combined with training alongside undefeated three-division champion Terence Crawford, will be the deciding factor on Saturday night, when he challenges WBO junior lightweight titleholder Masayuki Ito at Osceola Heritage Park in Kissimmee, Florida.

At Friday’s weigh-in, Herring came in at 129.6 pounds. Ito, who will be making the second defense of his WBO title, weighed 129.4 pounds.

The 33-year-old Herring is not ranked by the other three sanctioning bodies outside of the WBO (where he is ranked No.9) but he believes he is still worthy of fighting for a world title.

“My mental preparation has been a lot different for this fight because a world title is on the line,” Herring told RingTV.com on Friday afternoon. “I’ve always had that mentality of fighting with my back against the wall. My mentality has always been that I cannot afford to lose.”

Herring went through a stretch between July of 2016 and August of 2017 where he lost two of three fights. His first loss was by stoppage at the hands of contender Denis Shafikov, of Russia, and he would lose a close decision to Ladarius Miller 13 months later.

Top Rank signed Herring to a promotional deal last year and he has been unbeaten since. Herring has also become friends with Crawford, training together in Colorado at the USA training facilities. Both also attend each other’s fights for support. Herring absorbs any and all advice from Crawford, who will be sitting ringside in Kissimmee on Saturday night.

“I’m amazed at Terence’s hard work and determination,” said Herring. “‘Bud’ trains like he has nothing to lose. When you have that type of energy and you’re around him, it’s so motivating. Just watching him train is like he is fighting for his first world title belt. His work ethic is that much more motivating to me.”

Herring has overcome challenges outside the ring, including the death of his daughter Ariyanah from SIDS in 2009 and post-traumatic stress disorder (PTSD) from serving in Iraq over 10 years ago.

Herring has dedicated his fight tomorrow to Arinayah but he is confident he can also serve a purpose of winning for himself.

“Winning a world title will be the icing on the cake. I’ve been through a lot of ups and downs. (IBF welterweight titlist) Errol Spence calls me ‘Cinderella Man.’ If I don’t do anything more after winning a world title, I would be a happy man.

“I treat people the way I want to be treated. I reach out to people who admire what I do. Even casual fans who don’t follow boxing a lot. I put people first and that’s why I want to be known as a people’s champion.”

The post Jamel Herring: ‘My mentality has always been that I cannot afford to lose’ appeared first on The Ring.