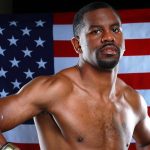 Top Rank has wanted to make a fight between WBO junior lightweight titleholder Jamel Herring and Carl Frampton for quite some time. According to Frampton, the 2016 Ring Fighter of the Year, the wait is finally over. He tweeted the news on Friday.

I've just got the news that I've wanted for a long time. I will be fighting the champ @JamelHerring before the end of the year. Thanks to MTK & WBO for making this happen. Time to become 3 weight champ

An hour later, Herring shared the news with a quote tweet.

See you soon, my man

He also added this.

Funny to see those who swore up and down, they knew exactly which direction I was headed, or had the scoop, are suddenly changing their tune and story. Those who really know, stay quiet, and act accordingly, others just look for something to run with… it’s cool though.

No doubt that was a dig at the critics on social media who have been nagging Herring (22-2, 10 knockouts) for months. When talks about a potential Herring-Frampton fight hit roadblocks, some fans blamed the American, even suggesting that he was ducking.

“A lot of people have said things about my character that were false,” Herring told The Ring. “I’ve been the main one pressing for the fight. Even after my last fight, people have made remarks that were simply untrue. I could’ve walked away from the sport then, but I did everything in my power to get this fight on paper!”

It was a rough summer for the former Marine. He was scheduled to face Puerto Rican Jonathan Oquendo on July 2, but tested positive for COVID-19 just before the fight. The bout was rescheduled for later that month, only for Herring to test positive again.  When it finally took place on September 5, it was an ugly, foul-filled affair that ended with Oquendo being disqualified in the eighth round for repeated, intentional headbutts. Herring suffered a nasty cut over his right eye in the fifth round, but fought on. After another intentional butt in the eighth, he complained to referee Tony Weeks that he couldn’t see, and the fight was stopped. Afterwards, Herring took heat from the ESPN broadcast crew, and it quickly spilled over to social media.

“I just found it disrespectful when they judged my character as a Marine,” he said. “I’ve been through far worse in life. I laugh at times because people forget how hard this year has been on me. I was training from May to September for one fight.

“In between camps, I suffered from COVID-19. Yet, I still wanted to do right by the fans and do the Oquendo fight.”

He continued, “Let’s be serious, I’ve been cut and battered far worse in the past and kept going. The Denis Shafikov fight (which Herring lost by KO 10 in July 2016) placed me in the hospital, yet I never gave up. But all of a sudden, I’m labeled as a quitter in a fight that I was winning big.”

Herring said the bashing was so ridiculous that he even contemplated retirement, mainly influenced by his wife, Jennifer, who took the criticism to heart more than him. “I’m a Marine, and I’ve grown thick skin,” he said. “So I didn’t let it faze me too much. I’m not upset with anyone and their opinion. Just tune into my next fight and judge me off of that performance.”

Now with all of that behind him, Herring is looking ahead to Frampton, a former two-division titleholder. “I’m really happy to finally get this fight,” Herring said. “At times it seemed as if it would never happen. In terms of a date and location, I can’t really give you a direct answer. At one point, I heard it could land on the (Tyson) Fury-(Deontay) Wilder3 card as the co-main, but it seems that fight is being postponed to next year. I’m just sitting back patiently, waiting for a concrete answer.

Although Frampton (28-3, 16 KOs) is the smaller man and appears to have lost a little zip on his fastball, Herring is expecting the best from the Belfast, Northern Ireland, native. “His biggest year was maybe 2016,” he said. “He was Fighter of the Year and I respect him for that. He’s accomplished so much in the sport. That is what motivates me to properly prepare for this fight. I expect to use my size advantage in this matchup. I have to be smart. I think it’ll be a chess match, but overall it’ll be a great fight!”

Per WBO ruling, the winner of the Herring-Frampton bout must face Shakur Stevenson (14-0, 8 KOs) next. Herring says he’s willing to face the undefeated former Olympian, but he doesn’t want to look past Frampton. “Shakur is a hell of a fighter, possibly the future of our sport, and that is another potential mega matchup” he told Ring. “But I can’t really give too much thought on a fight with him right now, because this fight in front of me is the main task. Frampton is still a dangerous individual.”

Michael Montero can be found on social media via @MonteroOnBoxing. His podcast “The Neutral Corner” can be seen every Monday on TheRingDigital YouTube channel, and heard on numerous audio podcast platforms around the world.

The post Jamel Herring Sounds Off On Critics And His Upcoming Fight With Carl Frampton appeared first on The Ring.