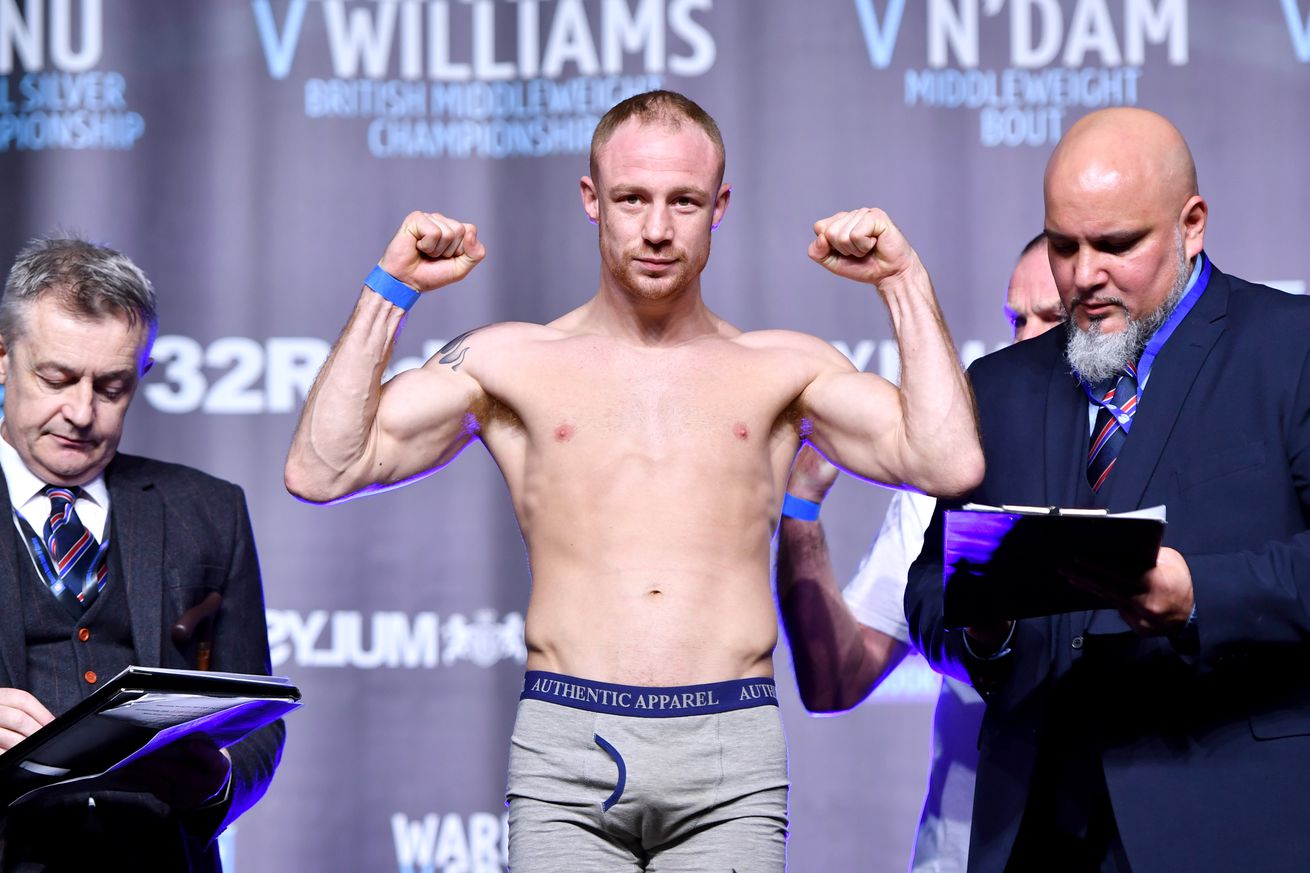 The British fighter extended his record to 7-104-2 on Saturday night, landing an unexpected prime time slot on BT Sport.

At 10 pm on a Saturday fight night, the last thing you’d expect to see is a 7-104-2 journeyman making his way to the ring. But such is the scheduling with Frank Warren and BT Sport shows, that Jamie Quinn found himself in a prime time slot for one of the first times in his career.

It was unnecessary. With Heffron-Bentley and Yarde-Spelman still to come on the card, Quinn was thrown into the limelight to showcase one of Queensberry Promotions’ brightest young talents, Amin Jahanzeb (8-0, 2KO), and that, he did.

As with all journeyman, Quinn got paid to survive. Not to say he couldn’t give his all for the allotted six rounds, but tucking up and allowing his opponent to work are typically seen as par for the course in his role as an away fighter.

In a fun fight where Quinn engaged in the young fighter’s ostentatious showboating, Jahanzeb sealed a 60-54 points win. Job done. Job done for Jahanzeb, and for Quinn, who packed up his stuff and travelled back up north to begin looking for his next payday in the weeks to come.

A journeyman is a profession that can often be derided, especially from outsiders looking into the crazy and confusing boxing world.

“It was the single most embarrassing day of my life,” Quinn told me over the phone. He was referring to a headline from a national tabloid newspaper that cited him, and his then opponent ‘Kas’ Hussain, as “Britain’s worst boxers”.

“It’s fair to say I didn’t sleep well that night,” he continued. “Still, a lot of people showed their support after that, which was nice. We aren’t just bums or punchbags which people outside the sport seem to think.”

After contacting the journalist responsible, the headline was altered, but the damage to the 30-year-old had been done. In the wrong hands, the term ‘journeyman’ can be perceived as a derogatory term, but to Quinn and hundreds of fighters, it’s worn as a badge of honour.

“I wanted to be a prospect – that was the plan, anyway,” he continued. “I thought I’d be able to grab a few mini-titles. I wasn’t aiming for a world title or to be a superstar. I won my first fight, but I struggled with selling tickets. I didn’t know how it worked. Having to pay for the opponents if you’re a home fighter and then having to sell tickets as well seemed hard work. I didn’t really want to go down the path of being a journeyman; it was more the money that turned my head.”

“In my second fight, I didn’t sell enough tickets, so I had to pull out. My manager Joe [Pennington] then got me one on the road, so I took that, losing a six-rounder vs George Thomson in 2014. I took it a bit too lightly and ended up taking a beating, but it was nice to get the money without having any pressure attached. After that, I kept getting asked to take fights on the road. It started from there.”

Through understanding the benefits of playing the role of an away fighter, Quinn realised early in his career that he could settle into a comfortable lifestyle on the road. “We get £1,000 for four rounds, £1,500 for six and £1,800 for eight and so on,” he explained. “You can get more if you take fights last minute, or fight someone that they are struggling to match. Sometimes the promotor and matchmakers will really put their money where their mouth is.”

The last-minute nature of Jamie’s call-up this past Saturday would have given him a tidy purse to take home, but sometimes it can even be a matter of hours notice.

He would go on to explain how he was given two hours notice before his first fight against Zelfa Barrett – now Commonwealth super-featherweight champion – in 2015. “Zelfa’s opponent had failed his medical with the doctor, with a cold sore or something daft like that, I got the call, and I’d literally just had my tea and was out walking my dog. They said they’d chuck me an extra 400 quid, came and picked me up and put us on last. It was great. One minute I’m walking the dog, and the next minute I’m back home a grand-and-a-half richer!”

Quinn would lose to Barrett over four rounds, twice, and has since shared the ring with some talented fighters in-and-around the lightweight and light-welterweight limit. Sam Bowen, Issac Lowe, Anthony Cacace, Sam Maxwell and Stephen Smith have all recorded victories over the Stockport fighter, with survival key to maintaining his relentless work ethic, week-in-week-out. Hearing the final bell and “feeling the envelope of money in your pocket” is deemed a successful evening’s work for journeymen like Quinn, but getting there requires a particular set of skills.

“You’ve got to make sure you’re ready,” he explained. “Make sure you’re fit and prepared for the phone call. You can usually figure it out after the first couple of rounds. If they are strong lads and going to do me some damage, I’ll keep on my toes and lively throughout, throwing limited punches back and keeping my chin tucked in. If they get too close and rough, I’ll tie them up, get hold of their arms and get to the other side of the ring. It’s not as easy as it sounds. If you get those flashy boxers without any power, I find it’s better to live in their boots and keep close smothering their styles. You’ve just got to be prepared; you’ve got to be ready to come across anything – like any job it’s mixing the rough with the smooth.”

Just seven victories camouflage the depths of Quinn’s boxing record, but his hunger to get the ‘W’ still burns once in a while. In a contest with Sam Larkin last March, Quinn registered his fifth win, thanks, in part, to a hostile home crowd. “I’ll be honest, two of my last wins on the road I had no intention to win. One occasion, there was a proper noisy crowd that was winding me up, and the kid had only had one fight before, so I thought I might have a chance here anyway. I was only there for a payday, but I heard the crowd and they were giving me some real abuse, so I was like ‘av’ this’ and beat him.”

There is palpable joy in Jamie’s voice as he recites highlights from his frenzied career. “It’s not just the money. I love boxing. I’ve been doing it for 20 years now on and off. I guess I’ve just got used to it,” he explained. As high-profile promoters continue to stress the need for fighters to take bigger tests earlier in their careers, and small hall promotors continue to haemorrhage money, a cloud begins to form over the future of fighters like Quinn.

“The sport wouldn’t be the same without journeyman, but to be honest it would be fairer,” he admitted. “It would be a sport, not a business. But I’m not sure if it would work like that. Promotors are obsessed with fighters who still have their ‘0s’, so if they all get it on, then they’d make a killing and the shows would be great. No idea how these prospects would get on because they’ve effectively paid for their wins with ticket money, and protected their ‘0s’ that way.”

Guys like Jamie are a credit to the sport. At first glance, their records often cause a smirk or an unintelligent headline to be written, but in the right setting and scenario, they are vital for the sport’s existence.