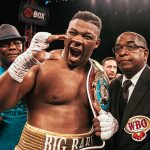 And the hits just keep on coming.

Heavyweight contender Jarrell Miller has tested positive on a third VADA test, this time due to trace amounts of EPO and a repeat infringement for GW1516 (endurobol), according to reports.

Just so everyone is keeping up, Miller has now tested positive for GW1516 twice, HGH and EPO. The first failed test (for GW1516) was from a urine sample taken on March 20. The dates and methods from the other tests is currently unknown.

The initial talk when Miller failed the first time was that he’d blown a multi-million dollar payday against Anthony Joshua, but, with the way things are going, he may very well have blown his entire career.

Joshua, who is rated No. 1 by The Ring at heavyweight, will still fight on June 1 at Madison Square Garden in New York against an opponent to be announced.

Tom Gray is Associate Editor for The Ring and a member of the ratings panel. Follow him on Twitter: @Tom_Gray_Boxing The post Jarrell Miller tests positive for a third, yes a third, time appeared first on The Ring.

One thought on “Jarrell Miller tests positive for a third, yes a third, time”