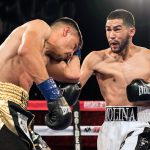 Javier Molina has recently put together a string of solid victories that have breathed new life into his pro career. That was not the case three years ago when he was forced to find work at a grocery store warehouse to support his family.

On Saturday Molina could punch his ticket to larger purses and significant fights if he defeats Jose Pedraza at the Bubble inside the MGM Grand Conference Center in Las Vegas. The 10-round junior welterweight bout will follow the heavyweight clash between unbeaten Efe Ajagba and Jonathan Rice.

Molina (22-2, 9 knockouts), who resides in the Los Angeles suburb of Norwalk, is coming off an impressive win over former world title challenger Amir Imam in his last fight on February 22.

Pedraza (27-3, 13 KOs), a former world titleholder at 130 and 135 pounds, resides in Cidra, Puerto Rico. He lost his 140-pound debut to contender Jose Zepeda on September 14 of last year but bounced back to defeat former world title challenger Mikkel LesPierre on July 2.

Despite Pedraza having split his last four bouts – one of his setbacks was a decision loss to Ring Magazine lightweight champion Vasiliy Lomachenko in December 2018 – Molina is expecting a tough challenge.

“I think it’s a great fight for me,” Molina told The Ring over the phone Tuesday evening. “I’m coming off a good win over Imam. These are the types of fights I’ve wanted. Pedraza’s style could make this fight go in many different ways. He utilizes good lateral movement. We’ve studied film of him and we have an answer for whatever he wants to do in the ring. If he makes adjustments, we’ll make adjustments.” Molina has won his last five bouts since a loss to welterweight contender Jamal James in January 2016. After his contract with Premier Boxing Champions ran out, the 30-year-old had difficulty securing a fight. He returned to the ring in June 2018, defeating Jessie Roman by unanimous decision but was unable to secure another bout.

In order to support his girlfriend and young daughter, Molina found a job at a Los Angeles-area Smart & Final grocery store warehouse, mostly work overnight shifts. It was during this time that Molina wondered if he would ever return to the ring again.

“It was frustrating for me,” said Molina, who represented the U.S. at the 2008 Olympic Games in Beijing. “My contract with PBC ended, [and I] didn’t get any offers. I fight on a Golden Boy card and beat Jessie Roman and nothing happened afterwards. I would go to the gym once or twice a week, but I also had a family to support.”

“Working at the warehouse during graveyard shifts was a tough time for me,” continued Molina. “Sometimes I’d start at 7:30 p.m. and work until 8:00 (the next morning). It wasn’t the work that was tough, it was thinking that I was never satisfied with what I had done with my career. Not one day would go by when I didn’t think about taking advantage of any opportunity that would come to me. Finally, (manager) Sam Katkovski helped me get a contract with Top Rank. My first fight back was last year (on March 23). I dropped down to 140 pounds and things are now great for me.”

Not only did Molina rely on the emotional support from his girlfriend and trainer Roberto Luna, he also received advice and support from older brother Carlos and twin brother Oscar, both former professional fighters.

Molina was grateful to both of his brothers for providing help when he needed it most.

“I’ve been boxing since I was seven years old,” said Molina, who made his pro debut in March 2009. “My brothers know me best and have also seen everything in the sport, good and bad. My brothers felt for me and were there for me. I got that added motivation from them, my girlfriend, my parents, and other members of the family.”

An impressive victory over Pedraza could put Molina in title contention at 140 pounds. He believes he’s been overlooked recently and is confident that he can reach the top.

“Before the Imam fight, I saw more was written on who he was going to fight next and not on his fight against me,” Pedraza said. “There’s no doubt in my mind that I can fight the best 140 pounds. I don’t think people have seen my full potential. Some people overlook me as a serious contender at 140 pounds. All I know is I’m going to surprise a lot of people Saturday night.”

The post Javier Molina: We have an answer for whatever Jose Pedraza wants to do in the ring appeared first on The Ring.