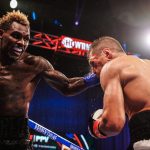 Through his first five fights in the middleweight division, including his first two world title defenses, Jermall Charlo had not faced top opposition so how would he fare when he finally did? As it turned out, very well indeed.

Charlo, using a powerful jab, a variety of power punches and a good chin, outfought Sergiy Derevyanchenko to win a unanimous decision and retain his WBC 160-pound belt for the third time on Saturday night in the main event of the first half of a Showtime PPV doubleheader he was sharing with twin brother Jermell Charlo at the Mohegan Sun resort in Uncasville, Connecticut.

Charlo, who won the first five rounds on all three judges’ scorecards, won via scores of 118-110, 117-111 and 116-112 to score perhaps the most significant win of his career, although he also defeated Julian “J Rock” Williams and Austin Trout during his junior middleweight title reign. The Ring, which rated Charlo No. 3 and Derevyanchenko No. 4 at middleweight going into the matchup, also scored the fight 117-111 for Charlo.

Charlo (31-0, 22 KOs), 30, of Houston, was facing the battle-tested Derevyanchenko, who was seeking to claim a world title in his third attempt. But although the challenger fought well in spots, Charlo’s overall activity and accuracy was too much for Derevyanchenko to overcome.

“I made my team proud and I did what I was supposed to do,” Charlo said. “I executed the game plan. (Trainer) Ronnie Shields told me that I passed the test tonight. I’m happy to go back to the drawing board now and figure out what’s next.”

Shields heaped praise on Charlo for his performance.

“I give his performance an A,” Shields said. “Everyone was talking about how this is a tough fight, but every fight is tough. Jermall has one of the best jabs in the business. It’s a hard jab and he hurt Sergiy with it. He backed him up with it. I’m so proud of him. He showed that the better the competition, the better he gets.”

The 6-foot Charlo, who held a four-inch height advantage to the squatter Derevyanchenko, got his jab going early and stayed steady with it throughout the fight. He broke through in the third round when he rocked Derevyanchenko with a right hand near the temple followed by an uppercut moments before the round ended. Derevyanchenko nearly went down but managed to stay upright.

In the fifth round, a sharp punch from Charlo opened a cut over Derevyanchenko’s right eyelid and it was clear the wound made him uncomfortable as he immediately began to paw at it.

By the end of the sixth round, Derevyanchenko also had swelling around his left eye as his face began to show major damage from the rough fight.

Derevyanchenko, who went to the hospital after the fight to get checked out as a precaution, had some moments in the middle rounds when he connected with a few clean shots but Charlo never seemed stunned or hurt by them and continued to fire back. During one fierce exchange in the eighth round, Charlo buckled Derevyanchenko with a right hand and he continued to strafe him with punches during the ninth round, during which Derevyanchenko pawed at both of his mangled eyes.

Charlo was firmly in control at that point even though Derevyanchenko never stopped trying, including in the frantic final minute of the fight when they traded toe to toe with Charlo winning the exchange when he landed a heavy uppercut.

“He was tough, but I knew he was going to be tough,” Charlo said. “I knew he’d come to fight, I just didn’t know how and when he’d try to turn it up. I felt like I never really let him turn it up and that was the game plan. I studied well and I didn’t let the (coronavirus) pandemic affect my training. I just want to keep fighting and not let any negative interrupt the positive.

“We stood toe-to-toe and we didn’t back down from anything. It was supposed to be one of the hardest fights of my career and we passed the test. He had a puncher’s chance and, of course, the fight could have changed at any moment. I listened to my corner and executed the game plan and got the win.”

“I stayed poised, I stayed composed and I executed the game plan,” Charlo said. “I was staying behind the jab. I got away from it a little, but Ronnie got me back. I wanted to knock him out, but dominating like I did was a big statement.”

The 34-year-old Derevyanchenko (13-3, 10 KOs), a standout amateur for Ukraine before settling in Brooklyn, New York, in 2014 to turn pro, dropped to 0-3 in his three shots at world titles over his last four fights. He lost close decisions challenging for vacant belts against Daniel Jacobs in October 2018 and Gennadiy Golovkin in an action-packed slugfest in October 2019 that many thought Derevyanchenko won. If there was any moral victory for Derevyanchenko, who outpointed Jack Culcay in a title eliminator between the losses to Jacobs and GGG, it was that Charlo could not knock him down when he had been dropped in the first round of both of his previous title bouts.

With a tough victory in hand and his title and perfect record maintained, Charlo said he was anxious to watch his brother Jermell’s junior middleweight unification bout against Jeison Rosario in the main event of the second half of the pay-per-view doubleheader.

But when it comes to what’s next for him, Charlo said he would let his team go to work on making a fight, which he hopes is a big one in a division that also boasts two of boxing’s biggest names in Canelo Alvarez and Golovkin as well as titleholder Demetrius Andrade and Chris Eubank Jr., who has called him out.

“The big fights are out there,” Charlo said. “I’m steady, learning and growing and stepping up in competition.

“The whole world understands that I can fight in there with the best of them. He gave GGG a harder test than he gave me so I think the levels showed. I’m the best middleweight in the world.”