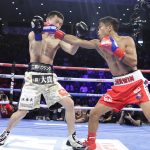 Jerwin Ancajas has the best matchmakers around him as a fighter under the Top Rank banner. In the end, there was no better matchmaker than the IBF’s own rankings.

Ancajas (31-1-2, 21 knockouts) turned in one of his best performances as a champion yet, stopping the game but outclassed Ryuichi Funai, stopping him at :01 of round seven at Stockton Arena in Stockton, Calif. The mandatory challenger Funai turned out to be just what Ancajas needed to revive interest in his career as he poured on the offense and left the Japanese tough guy bloodied and swollen.

The ringside doctor stepped on to the apron to take a look at Funai and decided he didn’t like what he saw, stopping the fight.

The win stretches Ancajas’ title defense streak to seven since he won the title in 2016, and returns him to good standing as a player at 115 pounds following back-to-back letdowns against Jonas Sultan and Alejandro Santiago.

Funai (31-8, 24 KOs) came forward from the opening bell, throwing right hands and standing straight up in Ancajas’ range. The 5’7″ Funai proved to be a welcoming target for Ancajas, who landed his right jab and straight left hand with frequency. Ancajas, 27, of Panabo City, Philippines played the greatest hits, returning to the long torso of his Japanese foe with both hands, and catching Funai coming forward with a counter right hook.

After picking his shots in the first two rounds, Ancajas stood his ground and traded, taking a few right hands but landing with heavier leather to do so. The fourth was all Ancajas as he punished Funai from bell to bell, recording a 43 to 5 edge in power shots during that three-minute period. That prompted the first doctor visit to begin the fifth, but the high output from Ancajas allowed Funai to recover a bit.

That break ended once the bell began for the sixth, and Ancajas resumed his mission of punishing Funai. A wide left hand on the button caused Funai to stagger back to his corner, and effectively ended the night.

Aside from the style matchup, which was more traditional than the awkward foes he faced in his last two fights, Ancajas also cited his training away from his Survival Camp home in Cavite, Philippines, moving his camp to the Marine base in Metro Manila to keep visitors to a minimum.