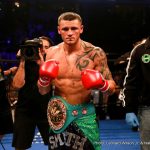 Joe Smith Jr. wandered in the boxing desert for a time, ruminating about where his boxing path would lead.

It wasn’t looking too good.

Before facing Jesse Hart in Atlantic City in January 2020, the hard-hitting light heavyweight from Long Island, New York, had two of his previous three fights. It was a back-to-the-lab moment to rekindle the flicker others once saw in him—and for 10 rounds against Hart he did.

On Saturday night, Smith’s Phase II begins when “The Beast” faces Eleider Alvarez (25-1, 13 knockouts) in a 12-round WBO eliminator at the MGM Grand Conference Center in Las Vegas on Saturday on ESPN+ (10 p.m. ET/7 p.m. PT).

If these two don’t deviate from their face-first, come-forward pasts, this has a Fight-of-the-Year candidate written all over it.

The Hart victory reinvigorated Smith (25-3, 20 KOs). It instilled some missing confidence that he gained by stopping Hall of Famer Bernard Hopkins, then 51, in eight back in December 2016 in what was the all-time great’s last fight.

Now, Smith Jr. is looking to build on that.

“I have to work my way to the top and beating Jesse Hart was something I really needed,” Smith Jr. said. “That win got me this opportunity (against Alvarez). The Hart victory was very important in keeping my career going, and every fight for now will be very important. I have to keep on winning fights to get the big-money fights.

“I don’t want to go backwards. If I didn’t beat Hart, there is a chance I may have retired, to be honest. I was fighting for my boxing life. I needed to win that to get the things that I want—that’s a world title and big money fights.”

Alvarez, 36, is a lot like Smith. His signature victory came in August 2018 against Sergey Kovalev, stopping the Russian in the seventh round to win the WBO 175-pound title. Six months later, Kovalev came back to Alvarez by unanimous decision and reclaim the WBO title in February 2019. Since then, “Storm” has fought once, stopping Michael Seals in seven in January 2020.

Smith Jr. addressed his footwork and boxing skills for Hart. He says he’s learned to ease up on the aggressive pedal, not looking to stop an opponent with one big punch. It’s gotten him in trouble in the past.

With Alvarez, Smith Jr. knows he can’t make mistakes and expose himself if he swings and misses with a big punch.

Is Smith Jr., 30, willing to engage in that kind of war with Alvarez?

“I know (Alvarez) is a very good counter puncher and he has a good right hand,” Smith Jr. said. “Whatever it takes to win, I’ll do. I’m looking to go in there and give it everything I have. I’m younger, faster and stronger. I just have to put it all together.

“I don’t mind fighting fire-with-fire against him. If it comes down to that, then that’s what I’m going to have to do.”

Alvarez, ranked No. 4 by The Ring, owns victories over Lucian Bute (KO 5) and WBA “regular” titlist Jean Pascal. Smith, rated No. 8 by The Ring, has the Hopkins’ victory on his resume, though has gone 2-2 over his last four fights.

The post Joe Smith Jr. is looking to keep moving forward against Eleider Alvarez appeared first on The Ring.