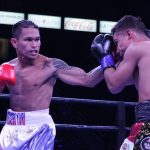 CARSON, California – With the fight close on the scorecards heading into the final round, John Riel Casimero took fate into his own hands, finishing Ricardo Espinoza in round twelve to win the interim WBO bantamweight title. There were just a few dozen observers still on hand at the Dignity Health Sports Park to watch the thriller, which took place as the final fight of the night, many hours after the PBC cameras shut off following the Danny Garcia vs. Adrian Granados main event.

Espinoza, who resides in Tijuana, Mexico, was the aggressor from the opening bell, putting Casimero on the defensive and forcing him to fight off his back foot. Casimero of Ormoc City, Philippines would tie up, but looked to counter with a left hook or right cross. The aggression paid off as Espinoza landed several thudding right hands to the head in round three. Espinoza mixed in his attack by throwing and landing left hooks to the body.

Casimero held his ground in the fourth, throwing lead right crosses to the chin and body of Espinoza, who took the punches well and attempted to counter to Casimero’s head. Espinoza abandoned the attack on Casimero’s body in order to connect to the head.

Both fighters let their hands go in round five, providing excellent exchanges where both landed thudding punches at one another. Casimero scored a knockdown at the end of the sixth round, dropping Espinoza to the canvas with a right cross to the head. Espinoza beat the count and the bell sounded to end the round. The knockdown seemed to wake Espinoza up as he again became the aggressor, throwing and landing several right hands to the head of Casimero. As Espinoza closed the distance, Casimero loaded up on hooks and crosses, especially in round eight.

Both fighters looked fatigued by round 10 as the amount of energy each fighter exerted and the punches landed began to take their toll. Casimero would hold as both fighters were on the inside, but Espinoza’s arms were free enough to land the more-telling blows during the final two rounds.

Casimero dropped Espinoza with a left hand to open the twelfth round. Espinoza beat the count, but was battered by Casimero, forcing referee Rudy Barragan to stop the fight at 34 seconds.

Espinoza, who was the mandatory challenger for the WBO title, falls to 23-3 (20 KOs).

Both fighters fought in the pocket through the first half of the fight, with Rosario landing the more-effective punches. Rosario, who is originally from the Dominican Republic and now resides in Miami, continued to use his faster reflexes to initiate exchanges and connecting with lead right and left hands to the head.

As the fight progressed, and sensing he was down in the fight, Cota closed the distance between the two fighters. Cota let his hands go within punching distance, landing counter left hooks to the head of Rosario.

Super middleweight Alfredo Angulo notched his first win in over three years, stopping Colombia’s Evert Bravo in the second round.

Angulo battered Bravo (24-10-1, 9 KOs) against the ropes until a right hand to the head dropped Bravo to the canvas. Referee Rudy Barragan counted Bravo out at 1:23.

Lightweight prospect Karlos Balderas stopped veteran Luis May of Mexico in round four of a scheduled six-round bout.

The bigger and stronger Balderas rained several combinations down onto May, who absorbed the punches by crouching low. Balderas began digging to the body in an attempt to take May’s legs away from him.

Balderas (8-0, 7 KOs), who resides in Salinas, California, dropped May with a left hook to the body in the third round. May beat the count, but went down to the canvas from a push from Balderas. Referee Ray Corona ruled it a knockdown.

After repeated warnings, May (21-14-1, 8 KOs) was deducted a point at the beginning of round four for landing a low blow. May fought on and went down to the canvas from a slip, but his corner threw in the towel, prompting referee Ray Corona to stop the fight at 1:07.

Romero (9-0, 8 KOs), who is promoted by Mayweather Promotions, used his speed and power to batter Figueroa, who resides in Bogota, Colombia. A three-punch combinations near the end of round three staggered Figueroa, who barely made it out of the round.

The end came at 1:27 of round four, as a counter left hook to the chin dropped Figueroa flat onto his back. Referee Rudy Barragan immediately stopped the bout. Figueroa had to be carried out of the ring on a stretcher.