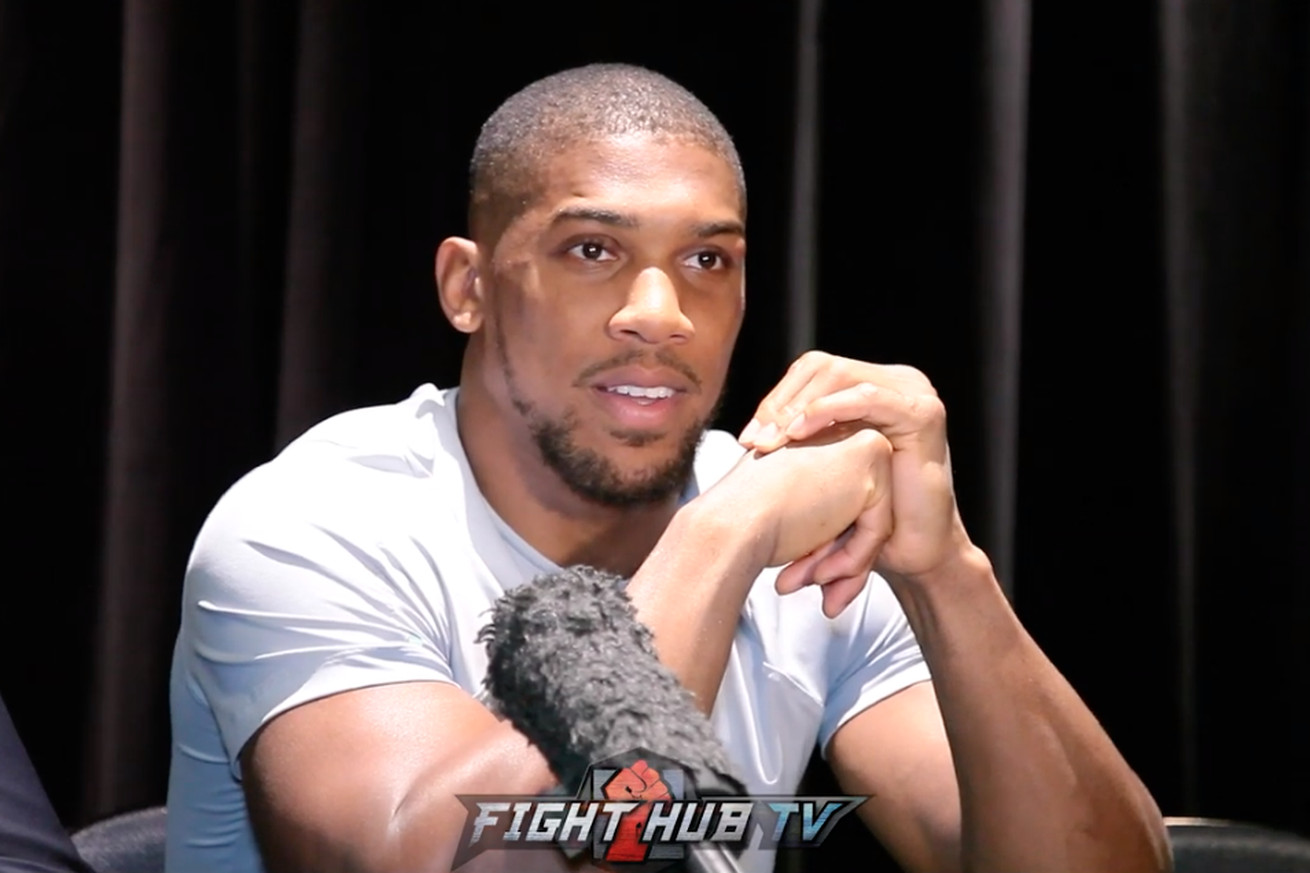 Anthony Joshua is no longer the WBA, IBF, and WBO heavyweight titleholder, as he was stunningly upset by Andy Ruiz Jr last night at Madison Square Garden.

Joshua sat down and spoke with press after the fight, addressing the loss.

On the loss to Andy Ruiz Jr

“It’s an upset, isn’t It? It’s not expected. Bookies said I was a favorite. One shot on the top of the dome kind of rattled me a bit, and I tried to stay in there a few more rounds. But the better man won, respect to Andy, and I’ll move forward now. See what’s next with the boss man, look out for the end of the year, who’s next, what’s next.”

“Never. I don’t underestimate anyone. He’s a decent puncher, decent fighter. It’s his chance, isn’t it? I always say that anyone who comes to box me boxes 15, 20 percent better than what we’ve seen. It’s funny because it’s easy to overlook someone because of their shape or their record or whatnot, but these guys are coming to win. He’s the better man tonight.”

“No. You learn from that situation. Naturally you’re going to speak about Wilder, Fury, naturally you’re gonna speak about Dillian. People ask me about that and I’m all ears to it, and I’ll give you the answer. It’s rude of me to say I’m not answering a question, so I’ll give you the answer. That’s how it is. Rather than try to block out the fact that there’s other competition out there, I keep my eye on the prize and say, ‘Ruiz is who I’m fighting but these are the guys I still wanna compete with.’”

“It just didn’t work out. What do I do next? Tidy up, brush off the cobwebs, and go again.”

On what went wrong

“I got caught on the top of the head and just didn’t recover in time. I tried to stay in there a few rounds and box clever, but it just didn’t work out. What do I do next? Tidy up, brush off the cobwebs, and go again.”

On whether this sets back the heavyweight “renaissance”

“Naturally, it does. But if it was the end of the road, then I’ll say yeah, but for me, it’s what’s next. It’s just, like, a minor setback. The locks on the doors don’t change. We’re still family, we still love the sport, I’m still a champ. We bounce back and go back to fight and get my hands on them belts again.”

On whether he wants the immediate rematch

“Me? You know who I want. But respect to Andy, if the rematch is where we’re at, then we’ll go for the rematch.”

On showing respect after the loss

“Trust me, I come from a good family, but where I was at in life, I’ve dealt with more shit than this. I’ve dealt with some real big losses and I’ve bounced back. Life is a journey. If I was at my setbacks back then and stopped what I was doing, I would’ve been fucked. But I didn’t do that, I kept my head strong, fought like a champion, and I managed to bounce back. I feel like this is just part of a journey that I’m on. This is boxing. What I have to do is reevaluate the situation, make it better, and we go again. We didn’t come this far to stop, we didn’t come this far to fold under pressure. We came this far and I definitely feel like we can go a lot further.”

On the referee stopping the fight

“Let’s say the judges, it’s a close fight, people think he won, they give it to me or whatever, I never blame the judges. They’re doing their job, referee does his job. I should’ve never touched the canvas if I didn’t want it to get stopped. That’s down to me as a fighter. I’ve got to go back there and handle my business.”

“I should’ve never touched the canvas if I didn’t want it to get stopped. That’s down to me as a fighter.”

On there being pressure for his US debt

On whether it’s the ultimate test to respond

“It’s a test. It’s not the ultimate, because there’s going to be plenty more. But it’s a test of character, as I’m trying to show by coming here now. We don’t fold. We stand strong at all times. I will address the situation that happened tonight and we move forward on to the next.”

On what went wrong for him overall

“If it was the reverse, if I would’ve won tonight, it would’ve been nothing went wrong. I’m not going to blame anything. I just lost tonight. Andy Ruiz was the better man. I’ve got to take it on the chin and roll with the punches. I don’t want to say this went wrong, that went wrong. I’ve got a great team. Seriously, a really good team.”

On a loss not being the end of the world

“It is. It’s like snakes and ladders. I’m not going to lie to people, winning is everything. Winning is everything, don’t lose that competitive edge. I’m not going to sit here now, like, ‘Ehhh, losing’s fine.’ Not in my books. But if you do happen to take an L, readjust, reset, bounce back. That’s the key to it. But I do not condone losing at all.”