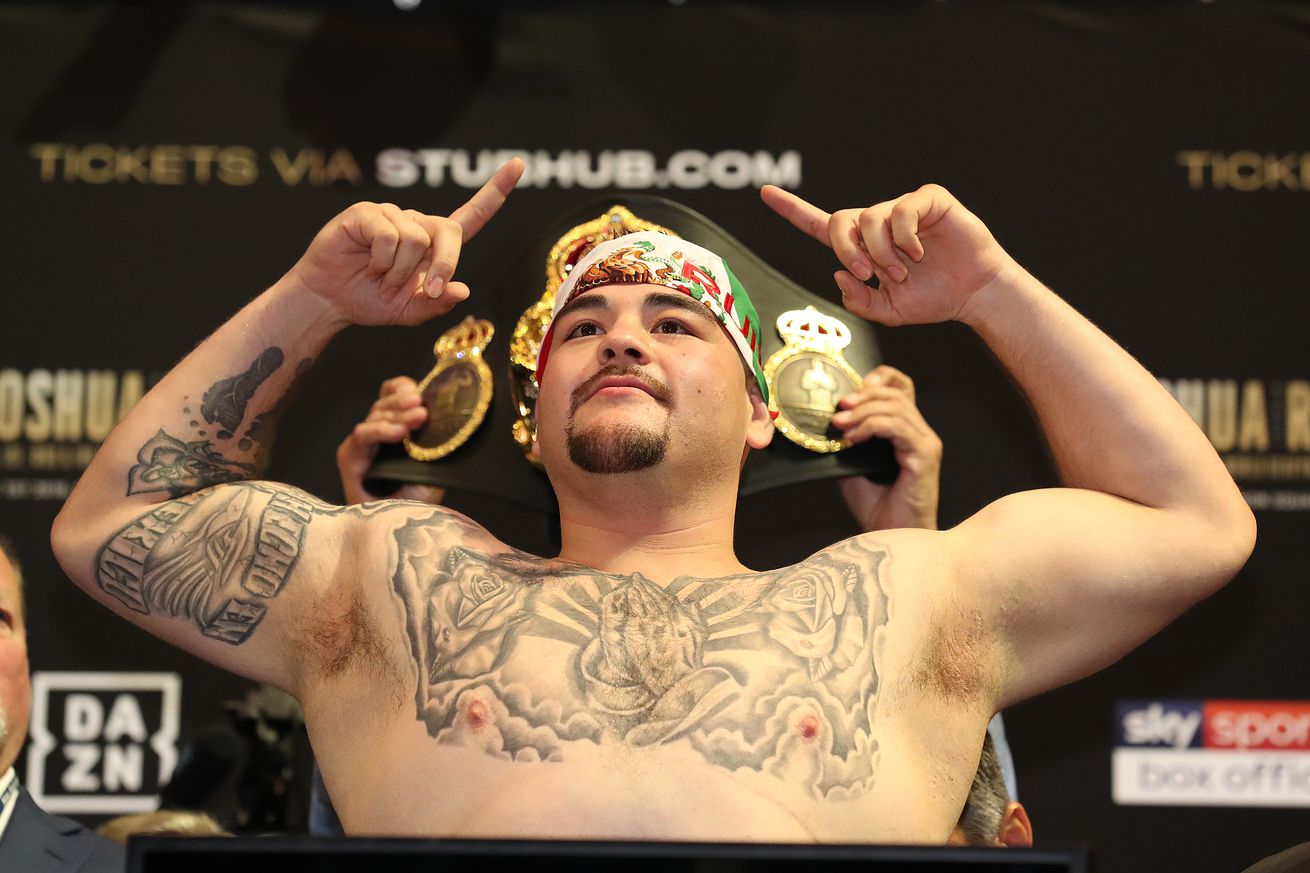 The tale of the tape may well tell the story of this fight.

In just a matter of hours, the DAZN card from New York will go live, with Anthony Joshua facing Andy Ruiz Jr in the main event.

We’ll have live coverage this evening starting at 5:30 pm ET.

Let’s take a look at the tale of the tape for the main event and the two other world title fights from the card.

I’m not saying that I know for sure that they meant to protect Ruiz’s belly from being photographed while he was weighing in, but I’m just saying that at yesterday’s weigh-in, before the main event guys stepped on the scales, they put up a little podium thing with a Joshua-Ruiz graphic on it, which wasn’t in the way for any of the other fights on the show.

Look, again, it is what it is: Ruiz is a chunky dude who came in heavier than he has for any of his last 10 fights, despite having been in camp pretty much continuously for however long it’s been, since he began preparations for his April 20 fight with Alexander Dimitrenko. He weighs what he weighs. He could been 10 pounds lighter than he was yesterday and it probably wouldn’t make any difference, anyway. So ultimately who cares? Joshua has big advantages in height and reach, and for as much skill as Ruiz really does have, is it a level that Joshua hasn’t seen before? Probably not.

Ring and TBRB still think a fair bit more of N’Dam than I do, but he did beat Martin Murray last time out. Trouble is Murray is, like N’Dam, an old middleweight at the back end of his career, and Callum Smith is a giant super middleweight in his prime.

Some have commented that Smith looks a bit drawn this week, and while I try not to put stock into that unless you look absolutely miserably horrendous like Oscar De La Hoya did before his fight with Manny Pacquiao, it could be worth noting. Smith hasn’t fought in eight months and in the meantime he became a father, so he surely hasn’t trained as much as he normally might even with that length of absence between fights. But I figure the worst that comes of it is it allows N’Dam to ugly it up and go the distance. It’s just really had to imagine N’Dam pulling this out. Weirder things have happened, I suppose.

I had my say on this in the staff picks, and I guess I can kinda repeat myself: I see this fight as quite similar to Shields-Hammer in April, which was a humbling experience for a longtime Good Professional women’s boxer against someone who came up an elite amateur for years. Shields was way, way, way too skilled for Hammer, and I expect we see the same here. It’s not even meant as disrespect to Persoon or Hammer, it’s just that they don’t have the schooling Taylor or Shields have had. If you want to make something of Persoon’s “pro experience,” she’s had 10 world title fights. Taylor’s already had seven. That’s basically a wash. Taylor has faced “world champions” several times now and smoked them all. Persoon is a huge underdog for a reason.