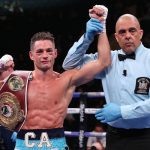 NEW YORK – Chris Algieri kept his career going by stopping Tommy Coyle after the eighth round of a spirited fight on the Anthony Joshua-Andy Ruiz undercard on Saturday. The undercard was streamed live in the U.S. on DAZN.

The junior welterweights slugged it out on even terms for six rounds to the delight of the early arriving fans to Madison Square Garden – Coyle buckled Algieri’s legs in Round 2 and the New Yorker dropped Coyle after hurting the British slugger to the body in Round 4 – but the former 140-pound beltholder took over the fight in Round 7. Algieri (24-3, 8 KOs) walked down the fading Coyle behind a stiff jab, accurate right hands and uppercuts in Rounds 7 and 8, and he continued to tap the Englishman’s body whenever in close. Coyle remained game and defiant throughout the fight but his corner did him a favor and kept him on the stool between Rounds 8 and 9, probably saving the domestic-level UK fighter from a brutal late KO.

Algieri, who was ahead on the scorecards (79-72, 77-74, 77-74), has now won three consecutive bouts since suffering a fifth-round stoppage against Errol Spence in 2016 and sitting out 2017. His goal is to get back into title contention at junior welterweight. Whether Algieri can do so is up for debate. The 35-year-old veteran did not get through the entertaining scrap unscathed. Both fighters sported nasty bruising and swelling around both eyes, and both absorbed a lot of punishment to their bodies.

However, the Huntington native remains a player as a fringe contender or gatekeeper due to his name and the fact that he was fan friendly vs. Coyle.

Light heavyweight prospect Joshua Buatsi, a 2016 British Olympic bronze medalist who was very popular among the English fans in attendance, improved to 11-0 with his ninth stoppage by scoring a fourth-round stoppage of game-but-outgunned veteran Marco Antonio Periban in his U.S. debut.

Buatsi, a 26-year-old boxer-puncher born in Ghana now living in the Croydon area of London, took his time with Periban (25-5-1, 16 KOs) in the first two rounds but took over the bout once he stepped up his aggression in Rounds 3 and 4. Buatsi dropped Periban in the middle of the fourth round and overwhelmed the Mexico City native with hook-cross combinations that forced the referee to halt the bout.

Periban’s only other stoppage loss was to James DeGale in 2014.