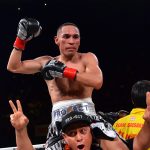 The 12-round bout will take place at the Centro de Usos Multiples in Estrada’s hometown of Hermosillo, Sonora, Mexico. The fight will stream live on DAZN.

This will be Estrada’s maiden defense of the titles he won from Srisaket Sor Rungvisai by unanimous decision on Apr. 26 at the Forum in Los Angeles. That was a revenge victory for Estrada who dropped a decision to the hard-hitting Thai a year earlier at the same venue.

The 29-year-old has not fought in Hermosillo since December 2014, when he defeated Jobert Alvarez by unanimous decision. Estrada, who has a co-promotional deal with Matchroom Boxing and Zanfer Promotions, is eager to put on a show before fans in Hermosillo.

“Thank God, my talent, effort, and discipline, I’ve accomplished a lot of dreams that I had as a kid,” said Estrada (39-3, 26 knockouts). “Now my objective is to defend my title in Hermosillo and break an attendance record of 10,000 at the Centro de Usos Multiples.”

“We have a risky defense against Dewayne Beamon. He has fast hands and an aggressive style, but that is good to provide a great fight to all the fans in the world.”

Beamon (16-1-1, 11 KOs), who resides in Goldsboro, North Carolina suffered his first defeat as a pro at the hands of veteran Martin Tecuapetla, losing by split decision on Aug. 11. Two months later, Beamon would avenge that setback by unanimous decision.

“I’m very excited for getting this world title shot against one of the best pound-for-pound fighters in the world,” said Beamon, who is managed by Gino Mazzanti. “It will be a memorable fight and I will surprise everyone on August 24 and accomplish my dream of becoming a world champion.”

“When they offered me the fight against Estrada, I had no doubts in accepting it. That night everyone will know my name, the world champion Dewayne Beamon.”

In the co-feature, unbeaten heavyweight and former amateur standout Filip Hrgovic will face Mario Heredia in a 10-round bout.

Hrgovic (8-0, 6 KOs), who resides in Zagreb, Croatia, made his Matchroom Boxing debut on May 25, stopping Gregory Corbin in the opening round. The victory over Corbin was also Hrgovic’s U.S. and DAZN debut.

“I’m looking forward to fighting Mario Heredia in Mexico,” said Hrgovic. “I’m expecting a good fight and I will train hard for him like I do for every opponent. I was very satisfied with how my first fight for DAZN in America went. It couldn’t have gone better for me really. I introduced myself in a special way.”

Heredia (16-6-1, 13 KOs), who resides in the Mexico City area, defeated Samuel Peter by split decision in his last bout on Apr. 13. He is unbeaten in his last three bouts.