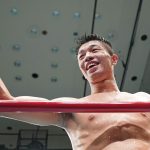 Japan increased its count of world titleholders to five on Friday as Junto Nakatani battered Filipino contender Giemel Magramo to an eighth round technical knockout win at Korakuen Hall in Tokyo to earn the vacant WBO flyweight title.

The end came at the 2:10 mark as Nakatani (21-0, 16 knockouts) overwhelmed Magramo (24-2, 20 KOs) with his non-stop southpaw attack. The knockdown came after after an uppercut/overhand left combination, but was more due to the sheer number of punches than any single shot. Magramo rose up to beat the count but referee Nobuto Ikehara elected to halt the fight.

The win is the second straight for Nakatani against a notable Filipino, after having stopped former IBF junior flyweight titleholder Milan Melindo in his previous bout in October of 2019. The 22-year-old from Sagamihara, Japan entered the fight rated no. 6 by The Ring at 112 pounds, while Magramo, 26, of Paranaque City, Philippines was rated no. 8.

Magramo, who is the son of former Filipino underdog and Manny Pacquiao opponent Melvin Magramo, suffers his first loss since 2016, when he dropped a decision to Muhammad Waseem in South Korea. Prior to this defeat, Magramo had won 7 straight.

The WBO flyweight title had been vacated in February by Kosei Tanaka, who is expected to move up to 115 pounds.