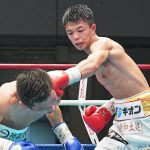 Finally, after several months and postponements Junto Nakatani and Giemel Magramo will meet for the vacant WBO flyweight title at the famous Korakuen Hall in Tokyo on Friday.

Nakatani, who is rated No. 7 by The Ring Magazine at 112 pounds, is excited to have his world title opportunity following months of uncertainty.

“I was not sure when it would take place, but neither was my opponent,” Nakatani (20-0, 15 knockouts) told The Ring through Hank Hakoda.

“Magramo is a good match for me and I am thrilled about facing him. It has been a really long time for me to get here. I am now ready to win the world title in my first attempt on November 6. Korakuen Hall is definitely my home ring and I appreciate my team for preparing the best fighting environment for me.”

Nakatani also takes the hopes of his former opponents into this fight.

“Boxing is such a cruel dog-eat-dog sport and I stood in their way or even ruined their careers because of my dream,” he said. “I will win on their behalf and I want to dedicate my victory to them. I have sacrificed everything to outclass Magramo and knock him out.”

Although Nakatani doesn’t watch much tape of his opponents he has an idea of what to expect from Magramo.

“He is not a devastating KO puncher, regardless of his vaunted knockout ratio. He keeps throwing small punches to keep an opponent busy. He obviously has flaws in the defense and I have to find a home for my left hand, which will be decisive countering shots mixed with solid work upstairs and downstairs.

“The key in this fight, for me, is how I prevent him from throwing four-five punch combinations. I will take advantage of my long reach (Nakatani has a 3-inch reach advantage) to keep Magramo at a distance. I have backup game plans that cover any possible situation.” The 22-year-old is well aware that Magramo is accustomed to facing southpaws.

“No problem at all,” Nakatani said without a pause. “I know he has had many fights against southpaws without losing. I am sure that I am a lot better fighter than any of them, and I will bring what is totally beyond his expectations.

“I am a fighter that belongs to a different level than he has ever experienced before. I will just focus on my own boxing.”

“I got confidence to fight for a world title after dominating a long-time world-class fighter in Melindo,” Nakatani explained.

“Throughout the bout I maintained my distance as planned. I was patient until the moment the referee saved him. I stayed focused on throwing accurate punches from my own distance, which was a major part of my fight plan.

“I got the necessary experience that I can make use of in this next bout because Magramo is a similarly diminutive fighter.”

Earlier this year, Nakatani decamped to Los Angeles to train with Rudy Hernandez at Maywood Boxing Club for five weeks. It was a valuable learning curve for the youngster, who got to spar over 30 rounds with former IBF/WBA junior featherweight beltholder Daniel Roman.

Nakatani has since had a mini camp in Yamanashi, near Mount Fuji, in July. As usual most of the training has been done at the M.T. Boxing Gym where he has sparred with, among others, Teraji and Masayuki Kuroda.

Hernandez had hoped to attend the fight, but due to the 14-day quarantine that hasn’t been possible. However, the trainer has been suitably impressed with what he has seen from Nakatani and predicts big things in his future.

“[This is a] very tough fight but it’s Junto’s time to shine,” said Hernandez. “I think the world will see a talented fighter that wants to be great. His confidence to be world champion began when he was a little boy. Nothing else has mattered to him.

Magramo is from a family of boxers. His father Melvin fought Manny Pacquiao, while several other family members have boxed professionally. The big-punching Filipino made his own debut in 2012 and won his first 17 fights before losing to Muhammad Waseem in November 2016. Since then Magramo (24-1, 20 KOs) has won seven consecutive fights to earn this title shot.

Our correspondent Hank Hakoda coordinated and translated this feature.

The post Junto Nakatani: I will bring what is totally beyond Giemel Magramo’s expectations appeared first on The Ring.