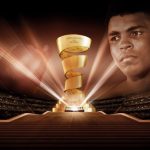 Fresh off a successful showcase of the World Boxing Super Series bantamweight and junior welterweight semifinals in Scotland, Kalle Sauerland, promoter and Comosa AG representative, is busy at work trying to nail down the details for the now heavily anticipated finals. Where they will be staged is anyone’s guess and rumors are already swirling.

So when will we learn the dates? “It will be a while, we are looking at locations on all continents. Be prepared for some surprises,” exclaimed Sauerland to The Ring.

With the bantamweights and junior welterweights replacing the super middleweights, some people say that this year is even better than last in terms of action and storylines.

Sauerland gave The Ring his take: “I would say that the tournament always serves up storylines. Last time we had great storylines in the semifinals with cruiserweight: (Aleksandr) Usyk, (Murat) Gassiev, (Mairis) Briedis. Just amazing storylines. We had storylines with (George) Groves and (Chris) Eubank Jr. and the massive crowd in Manchester. Obviously we also had the big final between (Callum) Smith and Groves.”

“In season two it’s no different. We have amazing storylines happening now. When (Naoya) Inoue came into the tournament, people knew he was a good puncher, now he’s gone from a good puncher to what some people consider the pound for pound No. 1. That’s what the tournament does. It puts fighters on a platform which allows them to show the world they are the best. It’s obviously credit to the tournament but mostly credit to the boxers who take the risk to go in and fight against the best.”

Join DAZN to watch Joshua vs. Ruiz and 100+ fight nights a year

There is the benefit of being able to determine who the best is as Sauerland pointed out. Inoue earned the right to become The Ring Magazine champion after his second round demolition of Emmanuel Rodriguez, just as Smith and Usyk did before him in the season one finals.

Unfortunately, we are more accustomed to talking about hypothetical matchups than the ones we actually see. “In sport, any sport, the best against the best will always have storylines. It’s too often in boxing that it doesn’t happen,” Sauerland said. “You just have to look at the heavyweights at the moment. They’re not fighting the best available. The sport lives on the best fighting the best and that’s exactly what the World Boxing Super Series sets out to do.

“It’s very easy to sit on the sidelines and pick and choose your opponents. In the tournament you don’t know where you’re going to box and you don’t know who you’re going to box. You’ve got to deal with that step by step. You see that with Baranchyk who didn’t want to box in Scotland and in the end he did because he’s a true champion. He lost but he took the risk and credit to him. You see the way [the tournament] works.”

In a nod that the tournament will be back next year, Sauerland addressed whether or not the second season was better than the first, “It doesn’t really exceed my expectations,” he said. “It’s what the tournament is there to do [with the best fighting the best] and it will do it every year.”

The post Kalle Sauerland more than positive about the World Boxing Super Series tournament and the future appeared first on The Ring.