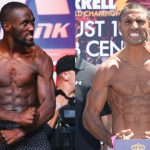 The deal is not quite done yet but Kell Brook is likely to be the next opponent to challenge Terence Crawford for his WBO welterweight title in the fall.

Brook, who held a welterweight belt from 2014 to 2017, told The Ring on Saturday that negotiations for the fight are far along and that it would take place on November 14 at the MGM Grand in Las Vegas. The fight would air on an ESPN platform.

“My team are in advanced talks with (Top Rank chairman) Bob Arum and we are edging closer to securing a fight,” Brook said. “If the numbers make sense, then as you already know, I’m keen as mustard to get the fight on… Tell the fans to get ready for fireworks in Sin City. I’ve wanted the fight for some time now.

“(Talks are) at an advanced and encouraging stage. We are happy to fight in the U.S. and (on) the date given.”

Brook (39-2, 27 knockouts) has been vocal for months about his desire to face Crawford, who has been out of luck in terms of securing one of the well-known welterweights who box for Al Haymon’s Premier Boxing Champions: Manny Pacquiao, Errol Spence Jr., Keith Thurman, Danny Garcia and Shawn Porter. That has put Brook’s name in the mix as a Crawford foe since early in the year but the coronavirus pandemic put talks on hold for several months.

Now the camps are serious about getting a deal done, Brook said.

“Crawford and Bob Arum are good guys. It’s good to have the discussions at an advanced stage now and hopefully we can close it in the next week,” Brook said. “It’s a good matchup stylistically and I don’t believe he’s ever shared the ring with someone like me. It’s a fight that gains transatlantic interest. It’s without a doubt a very big fight. In many people’s eyes he’s the pound-for-pound No. 1, so a win over the man of the moment would, of course, be very big.

“Me and my team are very confident that we can usurp him and dethrone another American champ at 147 in their own backyard.” Brook traveled to Carson, California, in 2014 and outpointed Porter to take his belt. He successfully defended the title three times before suffering back-to-back stoppage losses to Gennadiy Golovkin, for whom he moved up two divisions to challenge for the middleweight title in 2016, and Spence in a 2017 fight that cost him his welterweight belt.

After losing to Spence, Brook was idle for 10 months, mainly recovering from a broken orbital bone suffered in the bout. Then he moved up to the junior middleweight division, where he has won three fights in a row. Most recently, he looked sharp knocking out American Mark DeLuca in the seventh round in Sheffield on February 8.

While it’s been quite some time since the 34-year-old Brook has made the 147-pound limit, he said nobody should be concerned about it.

“[Welterweight] will be made,” he said. “It’s been a while but I’ve been in the gym since October last year for my fight in February. I’ve stayed ticking over since and feel good, and my weight is on track.”

Omaha, Nebraska’s Crawford (36-0, 27 KOs), who turns 33 on September 28, won a lightweight world title and became the undisputed junior welterweight champion before moving up to welterweight in 2018. In his first fight at 147 pounds Crawford easily disposed of Jeff Horn in the ninth round to claim a title and has made three defenses, knocking out Jose Benavidez Jr., Amir Khan and Egidijus “Mean Machine” Kavaliauskas in his most recent outing in December.

Brook feels like he will be Crawford’s biggest test so far at welterweight.

“Crawford is an elite level boxer so, of course, he has been a dominant fighter at 147, but he hasn’t faced anyone like me,” Brook said. “I watched him live up close in New York City (in April 2019 against Khan). He’s got very good timing, switches (stances) well too. You’ve got to respect his boxing but I’ll be prepared for everything he has. I’ll make sure I impress my style and skill set on him to negate and take away his.”

The post Kell Brook says deal is close for fight with Terence Crawford on November 14 appeared first on The Ring.