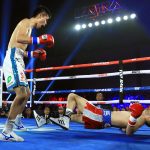 The emphatic first-round knockout win over previously-unbeaten Jeyvier Cintron became a no-decision at the Osceola Heritage Center in Kissimmee, Florida.

Eto, who resides in Tokyo, Japan, was a significant step-up in opposition for Cintron, who was a solid prospect and represented Puerto Rico at the 2012 and 2016 Olympic Games.

Both fighters had their moments during the first half of the opening round. A right hand to the chin dropped Cintron to the canvas, but replays showed an inadvertent clash of heads before Eto landed the right hand to the head.

Cintron attempted to get up from the knockdown, but he staggered across the ring, prompting referee Andrew Glenn to stop the fight at 2:03.

About 20 minutes after the fight ended, the Florida Athletic Commission saw replays of the fight, prompting them to reverse the original outcome to a no-decision.

Eto (24-4-1, 1 ND, 20 knockouts) is ranked amongst the top-10 by all major sanctioning bodies, with a No. 4 ranking by the WBO. Entering the Cintron fight, the 31-year-old Eto had won his previous eight bouts since losing by unanimous decision to then-WBC junior bantamweight titleholder Carlos Cuadras in November of 2015.

In an all-out action fight between featherweight prospects, Adam Lopez overcame a knockdown to stop Jean Carlos Rivera in the seventh round.

It was a compelling clash between two fighters with a loss on their records. Rivera was the house favorite as he is lives in nearby Orlando.

With about a minute left in the second round, a well-timed left hook to the head dropped Lopez to the canvas. Lopez was not visibly hurt, and attempted to fire back with combinations after getting up from the canvas.

Rivera was the more-effective fighter, but Lopez (13-1, 6 KOs), who resides in the Los Angeles suburb of Glendale, began to close the distance and connect with hard right hands to the head in round five.

At the end of the sixth round, Lopez hurt Rivera to the head, sending him staggering across the ring as the bell sounded to end the round. Referee Massimo Montannini administered an eight count as Rivera was in his corner being tended to by his trainer and second.

Sensing Rivera was still hurt, Lopez pounced on the Puerto Rican fighter, battering him against the ropes until Montannini saw enough and stopped the bout at 16 seconds.

“I started a bit slow, but I listened to my corner and made adjustments,” said Lopez, who is trained by James “Buddy” McGirt. “I knew he had trouble making weight, so I kept pressing him. I saw my opportunity and took advantage of it.”

Cuadras, who had not fought since defeating Ricardo Nunez by technical decision on Aug. 18, used his height and reach to outbox Lozano (15-7, 11 KOs) from distance throughout much of the fight.

A right cross to the head dropped Vargas (10-1, 4 KOs) face-first to the canvas, where he laid almost motionless as referee Telis Assimenios counted Vargas out at 1:53. Hard-Hitting middleweight Edgar Berlanga of New York City notched another knockout victory, this time knocking out Hungary’s Gyorgy Varju (7-5, 4 KOs) in the opening round. Referee Andrew Glenn immediately waved the fight off at 36 seconds after Berlanga dropped Varju to the canvas.

Junior lightweight Henry Lebron (9-0, 7 KOs) of Puerto Rico won by knockout in the opening round when Mexico’s Luis Lizarraga’s (6-13-1, 2 KOs) corner threw in the towel at 2:43 to save their fighter from taking further punishment. Lebron had dropped Lizarraga earlier in the round.

Hard-hitting light heavyweight Steven Nelson, who trains alongside Terence Crawford, battered Miami’s Victor Darocha (8-5-1, 6 KOs) before stopping him in the eighth and final round. Nelson improves to 14-0, 11 KOs.

The post Koki Eto’s first round KO of Jeyvier Cintron overturned to headbutt no-decision appeared first on The Ring.