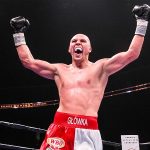 On Saturday, Krzysztof Glowacki steps into the lions den when he faces Mairis Briedis in their World Boxing Super Series semi-final bout, in Riga, Latvia.

The fight gained added significance last week when undisputed cruiserweight champion Aleksandr Usyk officially vacated two of his titles. Glowacki’s status as WBO interim titlist was upgraded to full betlholder and the WBC announced that the Glowacki-Briedis winner would fill its vacancy.

Glowacki, rated No. 4 by RingTV.com at 200 pounds, is understandably happy about the added relevance the fight has taken.

“I am extremely delighted that my fight against Briedis has become even more important because of WBC belt,” Glowacki (31-1, 19 knockouts) told RingTV.com, through Jacek Szelagowski of Knockout Promotions. “It’s a great opportunity to become one of the best Polish fighters in boxing history.

“I will do anything to win this fight and bring world champion title to my country. My teammate Krzysztof ‘Diablo’ Wlodarczyk was WBC champion for many years and now is time to bring the belt back home.”

The mild-mannered 32-year-old is respectful of what Briedis brings to the fight.

“(Briedis) is a very good boxer,” he said. “Technically advanced and very strong but I am focused only on me and my strengths. I know my value. I would not like to talk about my opponent because it is not my style.”

Briedis turned professional in 2009 after a successful kickboxing career. In Eastern Europe, Briedis was known in the gyms but the rest of the world didn’t know much about him until he flattened Manuel Charr is a fight at heavyweight in 2015.

He became the first Latvian to win a world title by claiming the WBC cruiserweight belt in April 2017, outpointing Marco Huck before losing, for the only time in his career thus far, to Usyk in his second defense. Since then 34-year-old has rebounded with two wins taking his record to 25-1 (18 KOs).

Although most of Glowacki’s career has taken place in Poland, he’s no stranger from fighting and winning on the road. He upset long-reigning WBO beltholder Huck by 11th round KO, in America, in August 2015. The southpaw has even fought in Riga, on the undercard of Mairis Briedis’ fight in the inaugural WBSS, so he’s relaxed about fighting in his opponent’s backyard.

“It does not matter for me,” he explained. “Lots of Polish fans will come to see me and I know I will have my own support. My girlfriend and my older brother Jacek are coming, friends from my hometown Wałcz and many others.

“I know the atmosphere will be hot at the venue. Briedis is a local hero but it is not a concern at all.”

To prepare for this fight, Glowacki has had a 12-week training camp and traveled to different places around Europe.

“We started camp In Spain (Benidorm,) then we moved to the United Kingdom (Manchester) for a sparring session and we finished in our gym in Warsaw,” he explained. “I had four sparing partners. My coach is Fiodor Lapin and I trust him completely. I achieved everything with him.

“We had a great preparation; everything went well. I am strong and feel ready.”