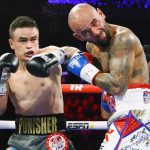 Abdukakhorov (17-0, 9 knockouts), who is originally from Uzbekistan and resides in Kuala Lumpur, Malaysia, is ranked No. 8 by The Ring.

The 27-year-old originally signed a promotional deal with Top Rank in February 2019, making his promotional and United States debut the following month, defeating Keith Obara by unanimous decision. In his last bout in October 2019, Abdukakhorov defeated former world junior welterweight titleholder Luis Collazo by technical decision after the fight was stopped in round 10 as Collazo was unable to continue due to a cut over his right eye from an accidental clash of heads.

“He is the first fighter I’ve signed to a promotional deal who is from Uzbekistan,” Lewkowicz told The Ring. “There’s a lot to like about Kudratillo. He has a strong amateur background and has done very well as a pro (thus far).”

A four-time national champion in Uzbekistan, finishing his amateur career with a 170-10 record, Abdukakhorov is currently trained by Armando Valenzuela at Elite Pro Boxing Gym in the Los Angeles suburb of Santa Fe Springs.

Abdukakhorov was originally scheduled to face welterweight contender and former world junior welterweight titleholder Sergey Lipinets on October 10 in Uncasville, Connecticut, later postponed to October 24, but the fight was canceled after Abdukakhorov was reportedly not able to obtain a visa to legally enter the United States.

Abdukakhorov, who is managed by Vikram Swapragasam, is the mandatory challenger to face IBF titleholder Errol Spence, who also holds the WBC title. Lewkowicz tells The Ring that Abdukakhorov will return to the ring sometime in March in a stay-busy fight, likely to take place in California. Lewkowicz hopes an opportunity to face Spence will take place later this year.

“Working with PBC (Premier Boxing Champions), it’s only inevitable that he will challenge Spence for the IBF title,” said Lewkowicz.