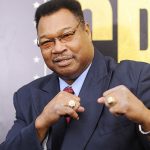 U.S. President Donald Trump had a punchy moment on Thursday at a campaign rally in Pennsylvania, fumbling the name of one of the state’s greatest fighters.

As Trump waxed poetic about Eastern Pennsylvania, he name dropped Easton, which is about 50 miles away from Thursday’s campaign stop in Old Forge. Trump attempted to elicit a cheer by mentioning former heavyweight champion Larry Holmes, who was known as The Easton Assassin, only Trump couldn’t seem to get his name right.

“How’s Earnie doing, good? How good is Earnie, right? Isn’t he great?,” Trump said to the confusion of the few dozen who attended in person. “Earnie Holmes. He was heavyweight champ, right?”

Shout out to the great Earnie Holmes! A forgotten heavyweight champion. Maybe because his name is actually Larry. pic.twitter.com/dP7gKhAKgm

At that point people in the crowd corrected him, before Trump made his recovery attempt. “How good was Larry? That was probably Muhammad Ali’s most dangerous fight. I’ve never seen anything like it. Muhammad would never go down, but Larry was a great champion.”

Holmes didn’t take too kindly to being called “Earnie” and let Trump know via his favorite social media outlet.

“Funny how you knew my name when you came to the LHV,” tweeted Holmes, referring to Lehigh Valley, where Easton is located. “Are you mad I wouldn’t make an appearance on your behalf?” Holmes finished the tweet with the hashtags #wearentfriends and #iamlarryholmes.

@POTUS Funny how you knew my name when you came to the LHV. Are you mad I wouldn’t make an appearance on your behalf? #wearentfriends #iamlarryholmes

Trump, who is seeking re-election for the presidency this November against Democratic challenger Joe Biden, pulled off a big upset in Pennsylvania in 2016, becoming the first Republican to carry the state since George H. W. Bush in 1988.

Holmes held the heavyweight championship from 1978 until 1985 and has rarely spoken out regarding politics but had been stung by another Republican president, Ronald Reagan, prior to his racially-charged 1982 title defense against Gerry Cooney. A phone line had been installed in Cooney’s dressing room so that Reagan could congratulate him afterwards in the event that he defeated Holmes. No such line had been installed in Holmes’ dressing room.

Emails to Holmes’ publicist and the Trump campaign were not immediately responded to.

The post Larry Holmes jabs Donald Trump after President flubs his name: We aren’t friends appeared first on The Ring.