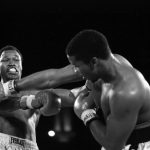 Two undefeated heavyweights, elite-level skills, wonderful ring craft, dramatic ebb and flow, and The Ring Magazine Round of the Year. Hyperbole to once side, this was one of the finest heavyweight championship fights you could ever hope to see.

On May 20, 1983 Larry Holmes scored a 12-round split decision over Tim Witherspoon at the Dunes Hotel & Casino in Las Vegas to retain his WBC heavyweight title. The show, dubbed “The Crown Affair”, also featured WBA titleholder Michael Dokes, who battled to a controversial draw against Mike Weaver.

The Holmes-Witherspoon result was also controversial and 37 years later nothing has changed. Largely overshadowed by bigger events in Holmes’ career such as the 15-round war with Ken Norton, the infamous dissection of a shot Muhammad Ali, and the racially charged conquering of Gerry Cooney, the Witherspoon fight, including its buildup and storyline, is certainly worth revisiting.

As well as being the WBC titleholder in early 1983, Holmes (42-0, 30 knockouts) was also Ring Magazine and lineal champion and the true king of the glamour division. In the five years since he’d won the WBC belt from Norton, Holmes had made 14 consecutive defenses, while the WBA belt had changed hands five times. Also note that Holmes had beaten three of the men who held the WBA title during his reign (Ali, Leon Spinks, and Weaver). In the early 1980s there were two governing body titles up for grabs but there was only one authentic champion. Witherspoon was 15-0 (11 KOs), and while the challenger was inexperienced at world level, he had a lot in common with his great opponent. Holmes fought out of Easton, Pennsylvania, while Witherspoon was a product of nearby South Philadelphia. Both began boxing late – Holmes at 19, Witherspoon in his early 20s – so neither had time for a prolonged amateur career. Holmes had 22 unpaid fights and Witherspoon just six, so they were forced to learn the hard way. Both men honed their skills within the confines of the best professional gyms in the county.

Holmes served as a sparring partner for Joe Frazier and Earnie Shavers and was employed by Ali between 1971 and 1975. Influenced by his idol, the young prospect developed into a quick-moving boxer with a face-busting left jab and an underrated straight right hand. Witherspoon was a product of the old-school Philly-style of boxing – he knew all the tricks – and also sparred Ali ahead of The Greatest’s final world title bout – against Holmes.

“Ali had nothing left,” Witherspoon told The Ring. “I was scared to hit him because he was sick and fragile. That might make people uncomfortable, but I’m a witness to what went down in that camp. In a way, Larry was cheated out of making history because his victory over Ali was tainted.”

Both fighters had teachers of the highest quality. Holmes worked with Richie Giachetti for the first seven years of his career and also absorbed knowledge from veteran trainers Ray Arcel and Freddie Brown, who had over 100 years of boxing experience between them. By the time he faced Witherspoon, however, Holmes was working with Eddie Futch, who is unanimously regarded as one of the best boxing minds ever. Witherspoon was coached by “Slim” Jim Robinson, who despite being a lesser-known quantity, was a former professional that campaigned from middleweight to heavyweight and a great trainer in his own right.

While there was significant bad blood between Holmes and Witherspoon during fight week at The Dunes, it was Robinson that drew Holmes’ wrath on fight night. The trainer arrived at Holmes’ dressing room to discover that the champion’s hands were already in the process of being wrapped. An argument ensued when Robinson insisted that he wanted to see Holmes’ hands wrapped from scratch and, backed up by the commission, he won his point.

“Don’t you ever in your life, as long as you’re black, speak to me again,” snarled Holmes in response to the upheaval. “And you’ll be black until the day you die!”

“Is that a threat?” responded Robinson, in an exchange that was captured on a 60 Minutes documentary. The fight was of the highest quality from the opening bell. Holmes at 6-foot-4 was in great shape at 213 pounds, and his long-range hitting was just superb. However, Witherspoon, on occasion, was able to catch the left jab with his right hand and fire back. Also, at 6-foot-3 ½ and 219 ½ pounds, this was not a heavyweight that Holmes could just throw around.

Upon reviewing the fight, I thought Holmes edged the first half, but things changed dramatically in the seventh. Implored by Robinson to throw more punches, Witherspoon responded and won the round big. However, the challenger had never been 12 rounds, he’d only gone 10 rounds twice, and consistency was a problem. Holmes, a crafty and cerebral pro, had taken part in over a dozen fights that were scheduled for 12 or 15 rounds and knew how to win close frames. He edged the eighth.

In Round 9 all hell broke loose.

Early in the session, a right hand to the side of the head had Holmes seeing stars and Witherspoon bobbed and weaved his way forward looking for more big blows. Attempting to buy time by clinching, Holmes was nailed again by a left hook-right hand combination and the stricken champion immediately sought refuge against the ropes. Holmes was in full-on survival mode as the challenger released punch after punch, pursuing his prey when he escaped to center ring and raking the body with powerful right hands. Another two huge rights to the head had Holmes setup for a possible finish when Witherspoon made the most fatal of mistakes: mid-combination he turned and looked for referee Mills Lane to stop the fight. You don’t do that against any fighter, but you especially don’t do it against Larry Holmes. Relying on the experience gained from surviving a cannonball right-hand knockdown against Shavers, and a near-identical nightmare with Renaldo Snipes, the champion went to the well. He landed a brace of massive single shots, and although Witherspoon slipped the follow up blows beautifully, this modicum of success kept Holmes alive.

It’s conceivable that Round 9, which was later voted The Ring Magazine Round of the Year for 1983, was a curse for the challenger. In the 10th and 12th rounds, Witherspoon fought as though he had the fight won, focusing too much on fancy foot movement, switching stance and playing to the crowd. Holmes, always the workman, was more consistent in those sessions, and despite the fact that I gave the Witherspoon the 11th, I ended up with a 115-113 card in favor of the champion. Admittedly, I have scored this bout a draw in the past. What probably made the fight more controversial was one of the Adalaide Byrd-style scorecards. Judge Chuck Hassett missed a good fight and handed in a 118-111 card in favor of Holmes. That was just nonsense. He was countered by a 115-113 card from Chuck Minker, who voted for Holmes, and a 115-114 tally from Herb Santos, who liked Witherspoon. Numbers aside, if Witherspoon had won the fight, there would have been no grounds for serious complaint.

“I was unknown and that was just politics,” said Witherspoon of the decision. “I had no problem dealing with Larry’s style, and if you watch the fight, at the end of the first round, I waved my hand to show him that I wasn’t impressed. He had nothing I hadn’t seen before, and I knew he couldn’t do anything with me.”

Holmes acknowledges that it was indeed one of the toughest tests of his Hall-of-Fame career.

“I wasn’t surprised that the Witherspoon fight was close,” Holmes told The Ring. “The only surprise for me was that he didn’t respect me. It was a hard fight, a close fight, but I thought I won. If I’m being honest, I trained too hard for that fight. My weight was really low (Holmes was 213 pounds and would never be that light again in his professional career) and I’d definitely over-trained.”

Witherspoon, who would go on to win both WBC and WBA titles during a rollercoaster career, acknowledges Holmes’ greatness, but firmly believes his particular brand of ring IQ was too much for “The Easton Assassin” to handle.

“I’ll give him credit because of what he achieved, but Larry didn’t trouble me,” said Witherspoon before expanding. “He would just jab, throw the right hand and clinch. Larry never went to the body, he had no inside game and he couldn’t slip a punch.

“In the ninth round, after I hurt him, it looked like he came firing back, but I was ‘rubbernecking’ which means I slipped every bomb he threw. I was taught how to do that by ‘Slim’ Jim Robinson. Larry was lucky to get the decision that night and he knew it. He did have amazing courage and a big heart, but styles make fights.”

Today is the 37th anniversary of the Holmes-Witherspoon bout, so let “The Rumble in the Jungle”, “The Fight of the Century” and “The Thrilla in Manila” gather some dust for a change and go back in time for this underrated classic.

The post Larry Holmes-Tim Witherspoon: The greatest heavyweight championship fight of the 1980s? appeared first on The Ring.