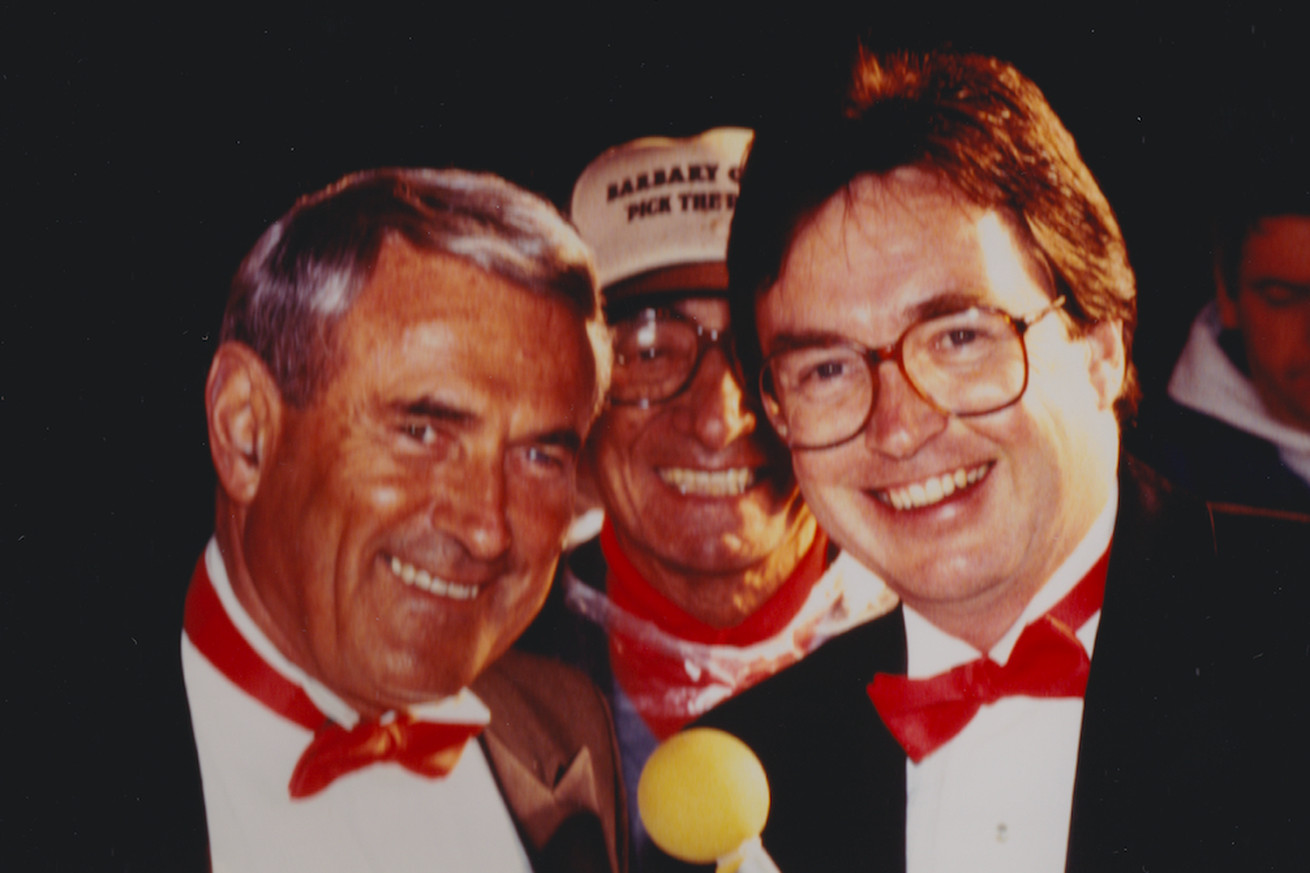 Tim Ryan, longtime fan favorite boxing broadcaster, spoke with us about his spot on the Hall of Fame ballot and more.

He laughed gently when we discussed the category for which he’s on the ballot, to possibly enter the International Boxing Hall of Fame in Canastota, NY.

“The Observer category. It’s like I wandered by some gym, and looked in the window,” said Tim Ryan, the all-class ex-broadcaster who checked in from British Columbia, Canada, to talk HOF.

The man called more than 300 championship fights and is a YouTube sensation. OK, “sensation” is maybe hyperbole.

But if you are looking for good fights to watch, and presentations that feature quality interplay between a blow-by-blow provider and color analyst, you will find yourself tuning in to more than a few scraps with Tim Ryan and his partner for the ages Gil Clancy.

I talked to Ryan having already made out my ballot in my head, with him being one of the five names I’d check off. (Two “Observers” will make it in.) For his competence, his longevity, and yes, his character. We all have different criteria in our head what makes someone a worthy entrant to this hallowed Hall, and the criteria can differ from person to person and category to category. Dan Rafael said the other day that he was not going to vote for James Toney among living fighters to make the Hall, because Toney got flagged for PED usage. He didn’t mention that back eight or 10 years ago Toney took to video to savage him, while him and Dan were having a beef. That may or may not stick in Dan’s mind, but he didn’t mention that incident being a factor for him. He’d only be human if that were so, of course.

Ryan, who also covered 10 Olympics, got into exactly zero of those sorts of grudges. He said he was pleased as punch simply to be on the ballot, which made me want to inform other people who might have been born later and didn’t watch so much boxing from the 80s.

“I’m flattered to even be remembered at this point,” Ryan said. “I’m thrilled that my colleague Gil is in Canastota. When he made it in, it was the furthest thing in my mind that I might be in there someday.”

“What made him the best, in my view, is because he was a trainer, he could see both guys at the same time,” Ryan said. “Most of us focus on one or the other, not the two of them at once. That’s why the audience, whether they were knowledgeable coming in or just passing by, learned a lot from Gil.”

Ryan, who shared tons of sterling anecdotes in his 2016 book On Someone Else’s Nickel: A Life in Television, Sports, and Travel, got to call the first Muhammad Ali-Joe Frazier fight in 1971. He got tapped by New Zealand radio to do the “Fight of the Century” from Madison Square Garden. That got picked up by the Armed Forces Network and an audience of American servicemen. With about a week to fight night, the organizers realized that such important clashes were always provided to the armed forces abroad, so they hustled and asked around to see who was free to describe the action. Young Mr. Ryan was.

“Hell yes,” he replied, knowing the opportunity itself had considerable value.

Ryan attended Notre Dame, and had grown up with a pop who was a football guy, an executive with Canadian football teams. Hockey was in his wheelhouse, so he got hired to do PR and then call California Golden Seals games in 1967. In 1969, he trekked to New York City, and started working at WPIX, doing sports reports. Ryan had a team player attitude, so he took on tennis, skiing, and he found compelling people and action in every arena. By 1977, he’d hooked into CBS, and boxing became a regular part of his repertoire. Ryan’s success in conveying the in-ring affairs was saluted by the Boxing Writers Association of America, as he won the Taub award as best broadcaster in 1986.

He has plenty of memories to pick from when asked for some standouts. Top of the list in boxing has to be, he said, when he worked the Alexis Arguello vs Aaron Pryor fight in Florida, and then the Ray ‘Boom Boom’ Mancini vs Deuk Koo Kim bout in Nevada on consecutive days.

The Arguello-Pryor fight unfolded in Miami on Friday, Nov. 12. Getting from Florida to Nevada would prove a challenge.

“We left Miami that night, the logistics were zany,” Ryan recalls. “We had a private jet from Miami, after the end of that dramatic fight. We rushed — me, Gil, Bob Arum, Mort Sharnik, we were supposed to get to Vegas in the afternoon. The fight would take place at about 3 pm ET.”

On the jet, things got dramatic, after Pryor gave everyone a charge stopping Arguello in round 14. Not enough gas, so they touched down in New Mexico. Tanks full, they finally made it to Nevada, but it was after midnight.

“We had to get up and be there for a 10 AM rehearsal ringside. It ended up being an overly dramatic 24 hours!”

Indeed; Kim got stopped in round 14, went down at the hands of Mancini the afternoon of Saturday, Nov. 13, and never got up. The South Korean pugilist died from head trauma five days later, and the last flurry was seen by a large audience watching the faceoff live on CBS.

Part of what made the era “golden,” as we look back, has to do with a shift in technology. Satellite usage became a norm, so signals got beamed all over the place, and that opened up the playing field.

“Bob Arum was clever enough to find promoters in Europe, and so their fights would be good for an afternoon time slot in America. Once that got going, it lasted a long time, into the 90s,” he said.

The satellite signal spread meant that Ryan would be booked in Belfast, as with Barry McGuigan’s world title fight there. Ryan has some Irish blood from his mother’s side of the family, and so he enjoyed the whole spectacle in June 1984 of the McGuigan versus Paul DeVorce clash at Kings Hall.

The Protestant/Catholic dynamic was simmering, down from a boil, so how McGuigan would handle his allegiances was a question mark. Barry’s dad sang “Danny Boy,” holding a peace flag, impressing watchers before they saw Barry defeat the American DeVorce. That meant people who came from up north, majority Protestant, and people from the southern section, majority Catholic, had direction on how to proceed: peace during the fight. Tim and Gil had to shout to hear themselves set the scene.

Much later, in 2013, Ryan was in Macau, after Arum put the word out that he wanted an ace who’d been in chill mode, out of the grind, to do blow by blow on the Zou Shiming-topped offering.

“It’s all been part of my life experience. I feel so honored. Sometimes young people ask me for advice about getting into the business. I have no formula, really. I do recommend you learn to write before you speak on the mic. And second, I guess, be aware of things going on around the event.”

Sports allowed Ryan to experience what most people can only read about. It widened his world view, to the point that he and the missus lived a good deal in Switzerland, where they maintained a second home. “It was, for me, an advanced education.” And visits to fairly exotic locales fueled his imagination, which translated into action. Ryan went to South Africa, then in the throes of moving from strict apartheid to a thawing period, to cover boxing, and having eyes opened to wildlife issues got him to become a lobbyist to improve the treatment of rhinos.

Older dudes talking about glory days, and how the present day is shit compared to when we all wore underwear woven with 14K thread is boring to hear. But those days, when Ryan and Clancy were often doing fights just about weekly, was quite a fertile period. The networks were in a healthy place, bean counters from MBA programs hadn’t weeviled in and looked at every cranny as a cost center.

“We were out front. It was Gil and me, and then you’d get PPVs of live fights, and then we’d take the replays over on the network side,” he said. “We’d be at the same fight as JIm Lampley and Larry Merchant on the other side.

“It was collegial, you’d say, ‘Hi, have a good fight.’ We weren’t really competing. The audience might choose to watch both. Of course, I wouldn’t deny we wouldn’t have feelings! But it was nothing that ever got personal. As for it being a golden age, you had boxing out of the 1976 Olympics on NBC, then all the way into the 90s. As for the Hall of Fame, I mean, look at the list of people in here. Carmen Basilio and Gil— back to Gil, I have such a regard for him. I did the eulogy at his funeral. As for me, I think plenty of voters will say, ‘Who’s he?’ But if I were to get in, that draws me back to Gil. I’d love to be in there, back with him.”