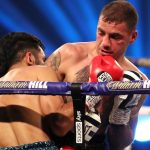 They call Miguel Vazquez “The Puppet” but it was the battle-hardened Mexican who had Lewis Ritson on a string tonight… and he still didn’t win.

At 33 years old, in his 52nd professional outing, Vazquez boxed beautifully but still came out on the wrong end of a dreadful split decision at the East of England Arena in Peterborough on Saturday. One judge scored 116-113 for Vazquez, but all sanity went out the window with 117-111 and 115-113 tallies for the home fighter. The Ring scored the bout 117-111 for Vazquez.

The 27-year-old Ritson was unquestionably the harder hitter, but he was unable to apply the pressure required to drain the older man of his energy, and there was no imagination to his offense. There was never any urgency or switch of tactics, and the grizzled old visitor appeared to pick up most of the rounds with ease.

“I think we won,” said Ritson (21-1, 12 knockouts) in his post-fight interview with Sky Sports in the U.K. “I was confident that I won although I knew it was close. I was hitting him with the cleaner shots and he was tap-tap-tap and running away.”

Vazquez did run away – he ran away with the fight.

Ritson was coming off a career-best win over countryman Robbie Davis Jr. That victory reignited his chances of securing a world title fight, but he looked limited tonight, and the official result was miles away.

A rematch hopefully takes place in 2021 and that’s the least Vazquez deserves. The former titleholder falls to 42-10 (16 KOs).