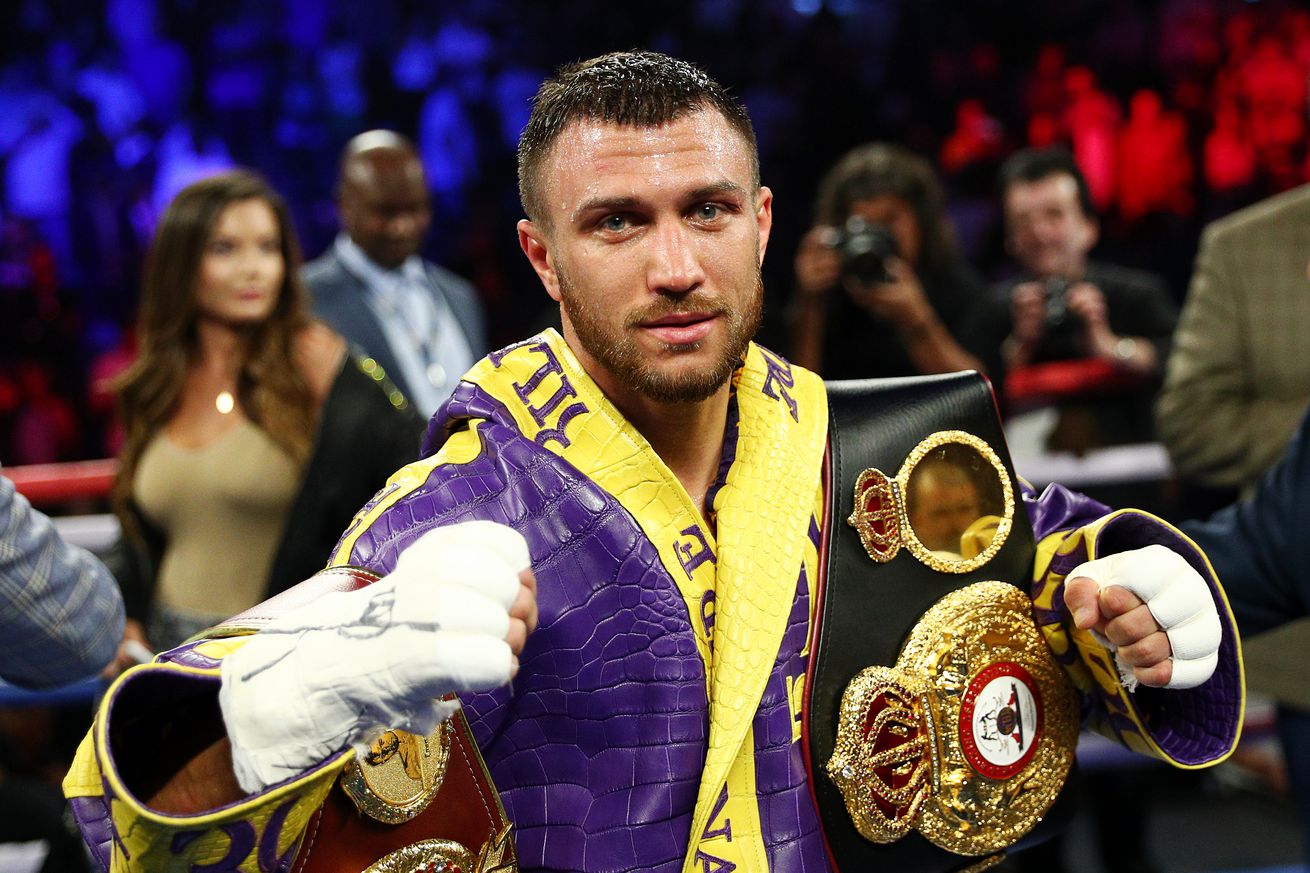 It’s a great, must-see fight, but despite the ESPN selling point and any hype you hear, it is not for the undisputed crown.

Vasiliy Lomachenko vs Teofimo Lopez this Saturday (Oct. 17, ESPN, 10 pm ET) is absolutely a great fight. We cannot stress that enough. It is must-see, as good and as big a fight as is possibly going to be made in 2020.

Lomachenko can already punch his ticket to the Hall of Fame, really, as an amateur legend — truly one of the great amateurs ever — and already a three-division world champion in the pro ranks. Lopez is a rising star who has superstar potential, the kind of fighter who gets fans and promoters alike excited. Experience vs youth, technique and power from both men. There is basically nothing to not like about this fight.

And what I’m about to say is not a reason to not like the fight, either, but it kind of has to be said.

It is not an undisputed lightweight title fight, no matter what ESPN or Top Rank or the fighters or anyone else tells you.

As much as you or I or anyone else may want it to be — and heaven knows the fighters and promoters and the hosting TV network want it to be — it just is not an undisputed title fight.

Those of you who are regular readers here or just diehard fans in general surely fully understand this, so this is really more for the curious. I’ve said this a lot, so why do I keep saying it? After all, if you watched the presser on Wednesday, you saw four belts up there, and boxing recognized four world title organizations — WBC, WBA, WBO, and IBF. They all seemed to be represented, but they weren’t.

Lomachenko (14-1, 10 KO) holds the WBA and WBO titles. Lopez (15-0, 12 KO) holds the IBF title. Those three belts will be on the line. So what was the green WBC belt on the stage? Didn’t Lomachenko win the WBC belt the last time we saw him, against Luke Campbell?

He did, yes. He won that belt, which was vacant at the time. And then he vacated it about two months later, and was “elevated” to “WBC franchise champion” status — a recently made-up designation that the WBC have created for popular fighters they don’t wish to overly burden with things like mandatory challengers.

Canelo Alvarez was the first to be given the status, with the WBC naming him “franchise champion” at middleweight so that Canelo wouldn’t have to be ordered to fight Jermall Charlo.

Lomachenko’s “elevation” meant he didn’t have to fight Devin Haney or risk forfeiting his belt if he did not. Charlo is now recognized as the “WBC world champion” at 160, and Haney the same at 135.

The idea was also originally that “franchise” titles couldn’t be contested in the ring. But perhaps fearing they might not make any money off of Lomachenko-Lopez, the WBC recently changed their mind on that.

The answer might not satisfy you, but I think it’s pretty simple. The WBC have only named two “franchise champions,” and even more than the WBA’s overly confusing mess in a sport where titles are already a mess to track for anyone but lunatic super-fans, it is purely political and rather obviously a showing of favoritism toward popular fighters. Furthermore, WBA “super world” champions still have mandatory challengers. They still have obligations to satisfy. WBC “franchise” champions do not. The titles weren’t even supposed to be able to be defended.

Now here’s a another big question: should you particularly care if this is undisputed or not? And the answer to that is the simplest yet: no, you should not. It would be neat if it were, but it really isn’t. But that doesn’t change that this is a truly elite-tier fight that you absolutely have to tune in to see if you have even a passing interest in boxing.