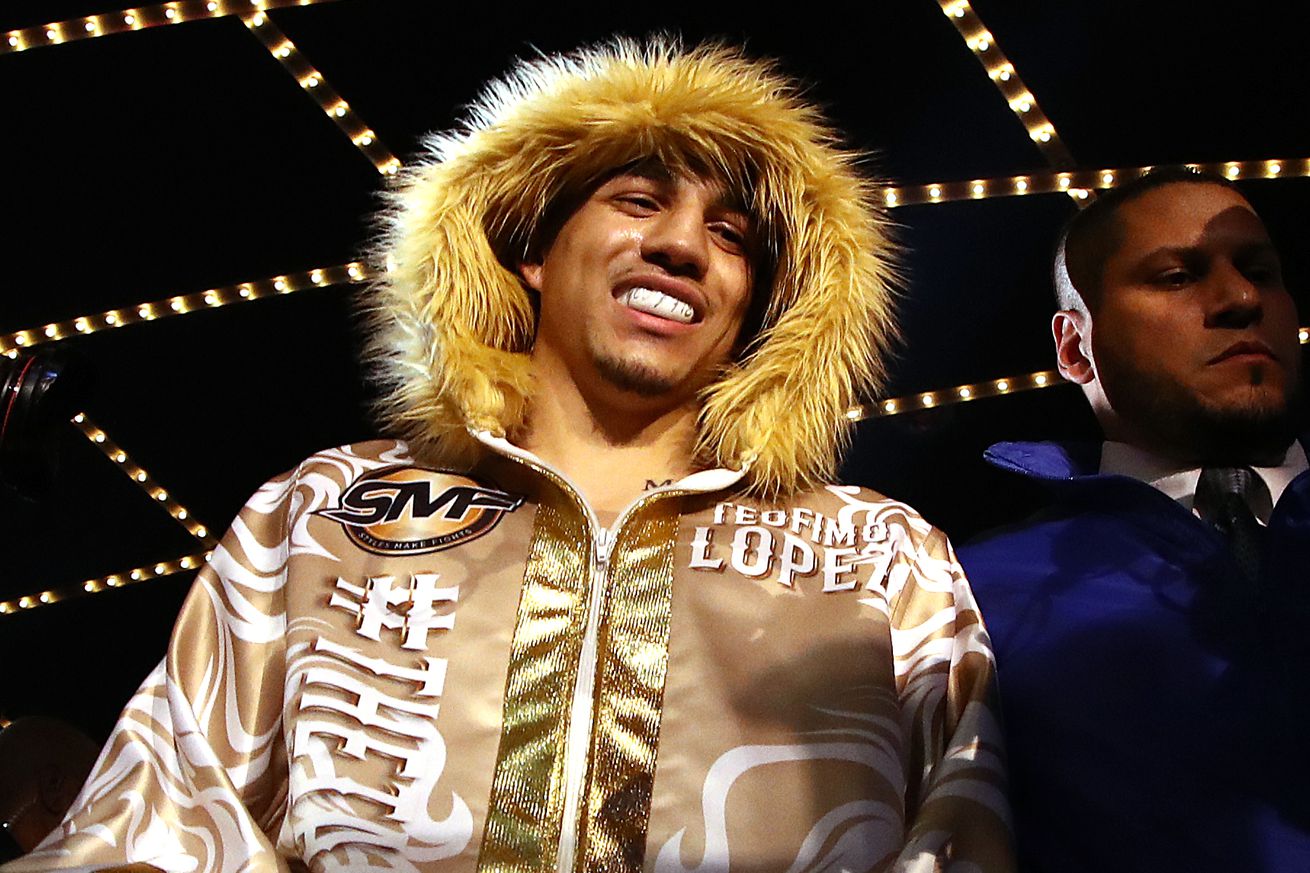 Teofimo Lopez has two sides to his personality, and explains how he keeps everything balanced.

He’s an interesting mix, confident on the edge of cocky one minute, humble as all hell the next.

Teofimo Lopez is built perfectly for this age, because as he rises the ranks, there will be those who adore him for his power and skill set, and who that tune in to watch him lose, to see the confidence get wiped off his face.

Which will it be come the night of Oct. 17? The skills of the 23-year-old on display, the accuracy, timing, and power melding and messing up Vasiliy Lomachenko? Or will the 32-year-old Ukrainian technical wizard show the young gun that he’s still got some learning to do before “The Takeover” gets fully activated?

I heard both sides of Lopez when we talked Friday after lunch.

What is the meaning of this lightweight showdown on Oct. 17? What are we going to see on that Vegas stage?

“That I’m the future of boxing,” Teofimo said. “I’m the one that’s gonna set the tone again!”

I dig the confidence. Sometimes cockiness rubs me the wrong way, but usually when it gets monotonous, when it’s 24/7. Lopez mixes speeds; he proclaims his greatness, and then right after that he tells you that his relationship with a higher power, his concept of God, serves as a sturdy foundation for him.

“All things are possible through God,” he told me, when I asked about that seeming pillar in his life. “I walk my faith, that’s my thing, that’s why I’m so confident, because as I see it God is on my side. We risk our lives in there, everybody who goes in there. You just saw that scary fight (Ivan Baranchyk was on the canvas for more than four minutes after being dropped by Jose Zepeda), and so when we make it through OK, I’m very thankful and grateful for that.”

The IBF lightweight champ gave some insight into how he achieves that balance in being ultra confident, but not allowing that to tip overboard.

“I’ve been blessed in numerous ways, have these skills, but I don’t let anyone blow smoke in my ass,” he said. “I don’t let none of that get in my head, I stay level-headed. There’s only one God.”

That all sounds great, for real. When someone has a spiritual foundation that’s legit, it can be a centering force. But not everyone is going to believe Teofimo could actually be into God like that, because he is in the hurt business. I told him that — dude, you make no apologies for it, you come out and say it, and show it, you want to knock the guy’s head off his shoulders. How does that mesh with the God stuff?

He laughed, and said, “Of course, I have two sides. One of them comes out in the ring, and one is outside the ring.”

Off and on, Teofimo has flashed moments where he’s said that he doesn’t care for certain elements of Loma’s personality. You all know the story of where the beef began, with Teofimo’s father approaching Loma, and then not caring for the reaction.

On this occasion, Teofimo isn’t in a place where he’s fixating on Loma’s manner. In the past, he’s referred to an aura of arrogance, but not this time.

He went a step further, but not to get in a dig, instead to clarify where his head is.

“Judge not, lest ye be judged. I’ve been judged. I don’t judge unless I’m judged first.”

And let’s say that Teofimo does show the old(er) dog that he possesses the better bark and sharper bite. What will that look like?

“What would change? The world, Chico, and everything in it,” he said.

“C’mon, Woods, don’t you know Scarface?” he said, laughing maybe at me and with me.

It turns out I had been flippin’ channels just last week, and the Brian DePalma film was running, and I stayed on it a bit. “Rebengaaaaa,” I yelled into the phone, enjoying it a bit too much. “C’mon, mang,” I said, sounding a good bit like Steven Bauer’s Manny.

16 minutes had passed, I didn’t want to overstay the welcome. So I finished by asking Teofimo if there’s anything I didn’t ask that he wanted to touch on, to close this chat sesh.

“Just tune in on Oct. 17, don’t miss history in the making,” he said. “Two father-son duos, two amazing fighters proving to the world and themselves that they are in the world’s best division. There will be fireworks!”

Hopefully, he said, normalcy will return, and in 2021, we’ll hit that reset button, and COVID will be but a seared memory to all good souls. “And in the meantime, stay safe, wear a mask, wash your hands.”

That right there, that message had me mightily impressed, that’s the little touch that I see and hear in the kid that contributes to my positive bias toward him. That’s leadership and it’s empathy on display. To me, Lord knows, the world needs more of that. But let’s be real: Lopez calling for responsible mask wearing will earn him a few more haters, who will turn on ESPN in hopes that Loma schools him.