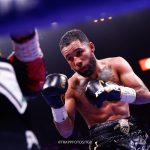 In a battle of two undefeated boxers, Luis Nery came out unscathed to win his second title in as many divisions.

The bout served as the chief support to the junior middleweight title unification between Jermell Charlo and Jeison Rosario.

The WBC title was declared vacant after The Ring’s No. 1. contender Rey Vargas (34-0, 22 KOs), of Mexico, relinquished the belt after he suffered a broken leg.

Nery (31-0, 24 knockouts), 25, of Mexico, who held the WBC version of the 118-pound title from 2017-2018 until he was stripped of the belt for failing to make weight for his second defense in a rematch against Shinsuke Yamanaka, controlled the fourth round by imposing his will on Alameda. He backed up the Long Beach-based Mexican with a four-punch combination late in the frame.

Nery, who shares the same trainer, Eddy Reynoso, as superstar Canelo Alvarez, predicted an early knockout, but both fighters exchanged jabs to the midsection in round five.

“I got the victory because I landed more,” Nery said. “You always look for the knockout, but he used the jab a lot, and that threw me off a little bit until I was able to connect more at the end of the fight.”

Leading up to the fight, Alameda told reporters that he would look for Nery to make mistakes. Late in the fifth, the 27-year-old landed with a series of straight left hands.

In a very tight sixth round, Alameda connected with solid punches downstairs and several jabs. Nery also landed his fair share of leather as both combatants traded sweat in the center of the ring.

The bout got heated in the seventh round as Nery brought forward a more aggressive posture. He asserted himself and slowed down Alameda with hard shots to the body, which drew heavy breaths from his opponent.

In-between rounds, Alameda’s corner admonished him for not throwing enough.

Compared to the prior Showtime bouts, the action of Nery-Alameda was monotonous.

Late in round 10, Alameda, who suffered his first loss in 26 fights, connected with a stiff straight left hand. Seconds later, there was noticeable swelling under Nery’s left eye.

Alameda fought hard for much of the 11th round, but the action picked up in the final round.

But it was Nery who closed the show in round 12, landing the more telling shots and riding off into the night with yet another coveted green belt.

“There are a lot of good fighters in this division. Brandon Figueroa’s name has come up, but we’ll check with the team and go from there. We’re ready to fight anyone at 122-pounds. We don’t fear anybody.”