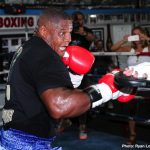 Luis Ortiz wants you to know that he’s still out there, still among the most dangerous heavyweights in the world. The Cuban expatriate known as “King Kong” will also remind you that he was beating then-WBC heavyweight titlist Deontay Wilder before he was stopped in the seventh round of his November 2019 title challenge.

Ortiz, the No. 5-rated heavyweight by The Ring, will step into the ring for the first time since the Wilder loss, when he faces Alexander Flores (18-2-1, 16 knockouts) in their PBC on FOX 10-round heavyweight main event this Saturday (8 p.m. ET/5 p.m. PT) from the Microsoft Theater, in Los Angeles, California.

“I plan on being the same seek-and-destroy guy I’ve always been,” said Ortiz through interpreter and trainer, German Caicedo. “My goal is the same, to be heavyweight world champion. I don’t care who I have to face or where I have to go to get there.”

The 41-year-old southpaw admits he doesn’t know anything about Flores, other than he’s 6-foot-4, like he is, that he’s right-handed, and “he’s in the way,” Ortiz says.

“Next year I would like to be in the mix with the other (elite) heavyweights and I think I deserve to be,” Ortiz said. “Anthony Joshua is a p___y, and is afraid to fight me. I know what I can do (heavyweight champion) Tyson Fury, if I got a chance to get in the ring with him.

“As for Wilder, I was beating him the first time and I made one mistake, I didn’t keep my left hand up, and that’s why I got hit. I haven’t watched either fight. I don’t plan to, either.”

Ortiz was up on judges Dave Moretti and Steve Weisfeld’s scorecards, 5-1, after six, and was also ahead on Eric Cheek’s card.

“The (COVID-19 pandemic) has been good, because it’s given me time to rest,” Ortiz said.

“Luis has a new focus, and he’s in far better shape now than he’s ever been,” Caicedo said. “We’ve been working with a strength-and-conditioning coach (Jukka Toivola) who’s worked on some things that Luis has accepted. People are going to see a different Luis Ortiz Saturday night, but he’s still the same in one way—he’s coming to destroy.”

The post Luis Ortiz is not ready to turn the page on his heavyweight dreams appeared first on The Ring.