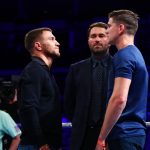 Luke Campbell claims he is ready to turn the tables on Vasyl Lomachenko, taking his WBA and WBO titles and sending a message to the rest of the lightweight division.

The two will face off Aug. 31 in London, with Campbell the next to take on the unified champion who defeated Anthony Crolla, another Englishman, in April for his 13th win in 14 professional fights.

Join DAZN and watch more than 100 fight nights a year

The vacant WBC belt is also on the line at the O2 Arena, where Lomachenko is the overwhelming favorite, though Campbell insists he is ready to spring an upset.

“After this fight, people will be asking other fighters why they’re taking me on,” Campbell said. “I have never wanted to take an easy route. I believe I am the best and want to be the best, so it doesn’t matter what route you take.

“I have worked every day of my life since I was a young lad to do this and I am in a position to win.

“We are the two best fighters in the division, so it is going to be an exciting fight. This is my time to show everybody how good I am.

“It doesn’t matter what people’s opinions are because it is all about what happens in the ring.

“I want to compete at the highest level and this is one of those moments where you make it or you break it, but I believe in myself. Every champion was once a challenger.”

Promoter Eddie Hearn is backing Campbell, saying: “We are talking about the pound-for-pound best fighter against our greatest ever amateur and I believe Luke has the boxing IQ and ability to beat him.”

But Lomachenko was amused by predictions of a loss, with Hearn having previously suggested Campbell would avenge Crolla’s loss.

“I think, if you understand boxing, this is just like a joke,” Lomachenko told talkSPORT.

He added to Sky Sports: “I think it’ll be a chess match, a smart, smart fight. I love smart boxing.” The post Luke Campbell confident of upsetting Vasiliy Lomachenko: ‘Every champion was once a challenger’ appeared first on The Ring.