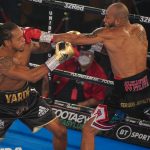 It was an enthralling contest without setting Church House in Westminster ablaze and both said immediately that they would be open to a rematch.

“I strongly feel that was a robbery,” said Yarde in his post-fight interview with BT Sport. “I feel that I won the fight.”

Arthur said he’d been hurt by a body shot in Yarde’s last round charge and he thought it was close.

Ian John-Lewis scored it extraordinarily wide for Yarde, 117-111, but Michael Alexander and Marcus McDonnell favoured Arthur by margins of 115 and 114 each.

The first round was very much an exploratory process although Arthur seemed to find some rhythm with his vaunted jab by the end of the session.

Both fought cautiously in the second, waiting, feinting and making the most of their sharp reflexes.

Yarde’s work rate picked up in Round 3 but Arthur’s jab was a sharp deterrent that allowed him to maintain distance between them and in Round 4 former world title challenger Yarde tried to jab his way in via the body in order to get in close.

Meanwhile, Arthur (18-0, 12 knockouts) was scarcely letting his right hand go at all, sparking murmurs online that he’d injured it in the warm-up but he denied it was injured afterwards.

Yarde landed a meaningful right towards the end of Round 6 which brought a smile of acknowledgement from Arthur’s face but the fight wasn’t catching fire.

Yarde (20-2, 19 KOs) had a more industrious eighth but Arthur started the ninth with his first meaningful right hand and he boxed well behind his left.

The 10th was arguably Yarde’s best round to that point. He was the aggressor and he enjoyed spots of success but it seemed to be all in the balance heading in to the championship rounds.

They swapped big right hands early in the final round and there was more urgency from Yarde and a big right shook Arthur and caused his legs to betray him.

The Manchester man stayed upright. Yarde’s corner implored him to close the show but Arthur bit down and hung in there.

McCann boxed well, landing lead hooks to the body and head but tough Matos was on the front foot, trying to make McCann work while walking him down.

McCann landed his left sparingly but it was accurate in the second and it caused Matos to bleed from his right eye. As the round ended Matos soaked up a hard one-two.

There was a significant gulf in class in the third, though McCann did pick up a warning for leading with his shoulder near the end of the session.

McCann got caught with a right in the fourth and Matos had more success in the sixth until Dennis “The Menace” opted to take the power off some of his shots while landing fast flurries and moving away.

Matos was struggling near the end of Round 6 but in the eighth he walked forward and waved McCann on, imploring him to engage in a shootout.

McCann, only 19-years-old and going eight rounds for the first time, improved to 8-0 with an 80-73 victory that didn’t reflect Matos’s efforts. Matos is now 7-4.

“I am absolutely confident he’s going to be a standout boxer of his generation,” said McCann’s promoter Frank Warren.