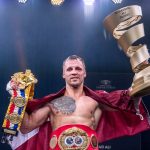 On Saturday, Mairis Briedis became a three-time cruiserweight titleholder when he relieved Yuniel Dorticos of his IBF belt and claimed the Ring Magazine championship and the Ali trophy by winning the World Boxing Super Series 200-pound final in Munich, Germany.

Briedis (27-1, 19 knockouts) put on an impressive display of power boxing to emerge victorious, although one of the judges scored the bout a draw, meaning that the official result was a 12-round majority decision.

Numbers to one side, the 35-year-old Latvian is respectful of the Cuban’s ability.

“We knew how dangerous Dorticos was,” Briedis told The Ring through manager Raimonds Zeps. “The task was to focus for all 12 rounds, and not to let loose at any time to miss his right hand, which is his most dangerous weapon. That’s why sometimes we missed the left jab because we were so focused on his right hand.

“The most important thing is that we finished the fight with no injuries. It was a long and hard wait to get to this fight.”

Kalle Sauerland, chief boxing officer of the WBSS, was hugely impressed by the performance.

“I thought it was one of the best counter-boxing performances I’ve ever seen in the ring,” said Sauerland. “It showed people that you can win and win convincingly off the backfoot.

“In the third round when Dorticos landed a big right and Briedis shrugged it off and unloaded a four or five punch combination, I think that was a moment Dorticos saw he was going to be in for a tough night because Briedis seemed to absorb the power and gave back at least as much in return. Every time Dorticos threw the right, he got two or three back himself. It was a fantastic performance.” Briedis’ right hand was accurate throughout the contest. Photo courtesy of the WBSS

Sadly, due to the COVID-19 pandemic, Briedis hasn’t been able to enjoy the usual trappings that go with such a notable victory.

“I haven’t really celebrated because we have to spend 10 days in self-quarantine,” he said. “No public events, no meeting other people besides my team and family.

“After I’m done with quarantine, I’m going to go with my family on holiday to Turkey. After coming back I’m going to have to go in quarantine for 10 days.”

As per his usual post-fight ritual, Briedis is winding down his training before enjoying some richly deserved R&R with his family.

“I don’t go directly to take a rest for two weeks, I’m preparing my body for a rest, I don’t cut right off [after the fight],” the new champion explained. “I still have easy training for two weeks. I’ll train here in Riga until I go to Turkey, then I can enjoy my rest.”

When Briedis returns home he will have lots of options for the next phase of his career. While he is open to continuing at cruiserweight, there is the temptation of a move to heavyweight.

“It’s completely in my manager’s and promoter’s hands,” Briedis disclosed. “We will see what the options are, I’ll consult my coach and family, then I will see what is best for me. Don’t think you are getting rid of me (laughs), I still want to achieve more.

“I want to keep on boxing, and whether it’s in cruiserweight or heavyweight, that’s something to decide. I’ve had many fights at heavyweight. I was participating in ‘Bigger’s Better,’ a heavyweight tournament, and I had a fight in Russia against (heavyweight) Manuel Charr. It’s just a matter of preparing differently when it’s at cruiserweight.”