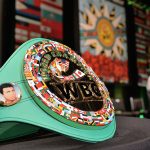 Although the 58th annual WBC convention that is taking place this week is far different than previous editions in that it is being conducted entirely online over a series of video conferences due to the coronavirus pandemic rather than all involved gathering in an exotic location, one thing remains the same: The sanctioning organization offering an update on the status of each weight class and its plans and orders for its world titles and elimination bouts.

That video conference, overseen by WBC president Mauricio Sulaiman, took place on Thursday with a variety of promoters taking part.

Here are the results — with the caveat that if issues arise because of the pandemic, the WBC said it will address them on a case-by-case basis.

Heavyweight: Dillian Whyte will defend his interim belt against Alexander Povetkin on August 22. If Whyte wins, the WBC said the winner of the third fight between world champion Tyson Fury and former titlist Deontay Wilder, who are penciled in to fight December 19 (although the fight could move into early 2021), must face Whyte next with the order going out the day after Fury-Wilder 3 takes place.

Cruiserweight: Titlist Ilunga Makabu was granted a voluntary defense and then must make two mandatory defenses because that’s the WBC rule when a fighter wins a vacant title, as Makabu did in January. Two final eliminators have been ordered to produce those mandatory challengers: Thabiso Mchunu versus Olanrewaju Durodola and Alexei Papin versus Ruslan Fayfer. Papin-Fayfer is slated for August 22 in Kazan, Russia.

Super middleweight: David Benavidez defends his belt against Roamer Alexis Angulo on Saturday night on Showtime. The winner is obligated to next face mandatory challenger Avni Yildirim, though it was pointed out that there could be issues with Yildrim being able to enter the United States due to various travel restrictions caused by the coronavirus pandemic. The WBC said it would address that if and when there is a problem.

Middleweight: Titlist Jermall Charlo is scheduled to defend against Sergiy Derevyanchenko on September 26 on Showtime PPV. So-called “franchise champion” Canelo Alvarez will, as expected, not fight on the September 12 date being planned (due to contract issues with DAZN).

Junior middleweight: Titlist Jermell Charlo will meet two-belt titleholder Jeison Rosario in a unification bout September 26 on Showtime PPV. The winner is obligated to next make an IBF mandatory defense. The WBC confirmed that it will respect the IBF’s fight as being next for the winner. Lightweight: Titleholder Devin Haney will have a voluntary defense (likely on October 3 with former unified featherweight titlist Yuriorkis Gamboa the leading candidate). Ryan Garcia and Luke Campbell will meet for the interim belt in November after a deal was made this week. So-called “franchise champion” Vasiliy Lomachenko, who also holds the WBA and WBO belts, will meet IBF titlist Teofimo Lopez to unify their titles, probably on October 17 on ESPN. The WBC board of governors voted in favor of accepting Top Rank vice president Carl Moretti’s request that if Lopez wins he be recognized as a “franchise champion.”

Junior lightweight: Titlist Miguel Berchelt will defend against mandatory challenger Oscar Valdez later this year on a date to be determined. The WBC said that Top Rank has until the end of August to confirm the deal, otherwise a purse offer will be ordered. A tournament — no participants confirmed — will determine the next mandatory challenger.

Featherweight: Titlist Gary Russell Jr. can next make a voluntary defense. Tugstsogt Nyambayar, who lost a decision to Russell in a February 8 title bout, and Eduardo Ramirez are scheduled to meet in a final eliminator on September 19 on Showtime.

Junior featherweight: It was announced that titlist Rey Vargas fractured his leg earlier this summer and will be idle for several months. Therefore, the WBC titleholder was named “champion in recess,” which means he can fight for the title immediately upon his return, should he want to. The now-vacant title will be filled by a fight between former bantamweight world titlist Luis Nery and Aaron Alameda, who are due to meet this fall. The winner will have to make two mandatory defenses. There will be two final eliminators with the winners becoming those mandatory challengers. One fight the WBC ordered was Carlos Castro versus Christopher Diaz for the first mandatory and former titlist Daniel Roman against former bantamweight titlist Juan Carlos Payano for the second. Roman is due to fight on the Showtime PPV on September 26 and could face Payano on that undercard.

Junior bantamweight: Champion Juan Francisco Estrada is allowed to make a voluntary defense (which could be a much-discussed rematch in a unification bout with Roman “Chocolatito” Gonzalez). Former champion Srisaket Sor Rungvisai is the mandatory challenger.

Flyweight: Titleholder Julio Cesar Martinez was scheduled to fight mandatory challenger McWilliams Arroyo on Saturday in Tulsa in the DAZN main event but withdrew recently due to illness. The WBC said the promoters are working to reschedule the bout.

Strawweight: Titlist Wanheng Menayothin is allowed a voluntary defense and could fight in September.