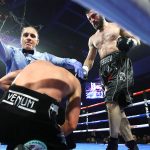 I started out with an apology…

To Marc Ramsay, trainer of light heavyweight beastly bad-ass Artur Beterbiev, I said: “I’m sorry, for not knowing how good Beterbiev really is.”

“No big deal,” said the Canadian tutor. “That is the beauty of boxing!”

We delved into that Oct. 18 bout which saw the Russian grind down fellow titlist Oleksandr Gvozdyk, in Philadelphia and on ESPN.

One thing that jumped out at me in the immediate aftermath of the TKO-10 result: how Beterbiev said that he hasn’t always loved training…but now, with two belts, he can and will train harder…This is possible? Can he look BETTER, because of training harder?

So…did Ramsay know that the fight would go like that?

“Yes and no ….. As a trainer you never know exactly what the other guy will do …. but we already know Gvozdyk was very good technician and Teddy Atlas is a very good coach. We were expecting a big challenge from them and this is what we had.”

That body work…Great God, my insides hurt, in sympathy to Gvozdyk, as I saw the 34 year old strafe the Ukrainian hitter, age 32. Does Ramsay think Beterbiev is maybe the best body puncher in the game?

“I don’t know, because there is a lot of good body punchers but this is an aspect that we try to work in the gym every day.”

And that seemed to be near the top of the list, for game-planning…

“Yes, that was one option we had in mind and as soon as Artur started to work downstairs the fight turned in our favor.”

For those that don’t know, Ramsay started with Beterbiev, who lives in Canada, from his first pro fight in 2013. He trained Jean Pascal, right now works with David Lemieux, Eleider Alvarez, Oscar Rivas and top prospect Arslanbek Makhmudov, a total of 13 boxers as of today.

We moved on to the near future; Beterbiev is slated probably to fight 16-0 Chinese boxer Fanlong Meng, who is rated No. by the IBF, and would be the mandatory challenger for the IBF belt-holder.

“I know him since he was amateur,” Ramsay said of the Chinese hitter. “He’s a very good technician, a southpaw, 6-2, former Olympian. He is not well known but better than a lot of guys with big names.”

He looks composed to me. Smart fighter, cautious, I said to Ramsay.

“Oh yes, we need to be careful with him,” the teacher responded.

Are there any fights Ramsay wants to see Artur get? Like, matches he thinks would suit him, or suit the fans, especially?

“To be honest, we don’t target names but the target is all the belts and fast as possible.”

So…Artur wants to be active now, make up for lost time a bit?

“Yes, we hope so!” The light heavyweight smashing machine fought just once in 2017, and once in 2018, because of promotional issues and the like.

I asked Ramsay – Is anyone in this division gonna be able to beat your kid? Bivol? Kovalev? Canelo?

Nope, not a trash talker, Ramsay isn’t one to stoke fires, offer blistering takedowns to stir that pot.

“I don’t like trash talk,” he said. “I have respect for people who work that tough business.”

And, now, with the word fully out on the Beterbiev skill set, the respect for Ramsay within this tough business rises that much higher.

The post Marc Ramsay’s stock rises as a trainer after latest Artur Beterbiev win appeared first on The Ring.