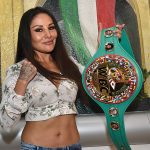 Mariana Juarez is not letting age slow her down. Instead, she continues to accumulate wins over top fighters in her weight class and successful defenses to her world title belt.

Juarez will again defend her WBC Female bantamweight title, this time against Yulihan Luna Avila Saturday night at the Grand Oasis Arena in Cancun, Mexico. The 10-round bout will air live throughout Mexico on Televisa.

Juarez (54-9-4, 18 knockouts) last fought on October 12 of last year, defeating Carolina Duer by unanimous decision. The victory over Duer was ninth defense of the WBC title she won by defeating Catherine Phiri in April 2017 in her adopted hometown of Mexico City.

A win over Luna would be her 12th consecutive victory since losing a close decision to Argentina’s Daniela Bermudez in August 2016.

Juarez, who will turn 41 on January 29, is in her 23rd year as a professional prizefighter. She is one of the more-popular female fighters in Mexico, where she garners huge ratings anytime her fights air on Televisa.

Ring Magazine ranks Juarez as the No. 2 bantamweight at 118 pounds behind Bermudez, who Juarez has demanded a rematch against to avenge the loss.

Luna (19-3-1, 3 KOs) stopped Kathia Rodriguez after round 6 of her last bout on September 25 in her hometown of Gomez Palacio, Mexico. The 26-year-old has won her last three bouts since losing to Guadalupe Martinez Guzman in November 2018.

Another world title bout will take place on the Promociones del Pueblo/ Cancun Boxing card as Yesenia Gomez (17-5-3, 6 KOs), who resides in Cancun, will defend her WBC junior flyweight title against Mirna Sanchez (5-0-1, 2 KOs) of Ciudad Juarez, Mexico in a 10-round bout.

Junior featherweight Alexis Bastar (16-1-1, 7 KOs) of Cancun will square off against Mexico City’s Israel Gasparrillo (10-1) in an eight-round bout.