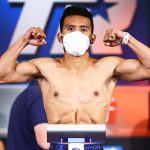 Mark Bernaldez hasn’t seen his wife or 5-year-old son since January. Normally, he would have a quick turnaround in his Miami training camp, fighting once and then making his way back home after four months. But these are far from normal circumstances we’re living in.

In some ways, the Filipino boxer was lucky. Having already been in the U.S. when travel shut down due to the pandemic means he is able to get back in the ring Thursday night, facing undefeated prospect Albert Bell on a Top Rank on ESPN card at the MGM Grand in Las Vegas. But it also means his stay has been extended, with no telling when he’ll be able to return home to General Santos City, Philippines.

“It’s difficult to be away from my family because I miss them, especially now that there is a pandemic,” said Bernaldez (20-3, 14 knockouts), who trains with Osmiri “Moro” Fernandez. “But I need to be away to train and I do this for them.”

In addition to his family, he also has the added motivation of having seen one of his gym mates, Mike Plania, defy significant betting odds to defeat the WBO’s no. 1 bantamweight contender Joshua Greer last month.

“I am so inspired by my friend Mike, and I want to win this fight,” Bernaldez, 26, says. “This is why I am pushing myself to train hard  because I want to win.”

Unlike the Cleveland Indians slugger of a similar name, Bell (16-0, 5 knockouts) of Toledo, Ohio doesn’t bring a lot of power to the ring, but he is among the tallest 130-pounders you’ll ever see, bringing a 6-foot frame, Diego Corrales-like frame into the ring. The 5’6″ Bernaldez says he saw the 27-year-old fighter up close the last time they fought on the same card, on October 26 in Reno, Nevada. That night, Bell scored a unanimous decision win over Frank De Alba, and Bernaldez lost a decision to Andy Vences.

“It’ll be very tough because Bell is a good fighter and very tall for junior lightweight,” said Jim Claude Manangquil, who promotes Bernaldez under the Sanman Promotions banner. “But I know Mark has a ton of heart.”

It was that loss, which was competitive if wide, that gave Bernaldez back his confidence. Bernaldez had originally turned pro in 2011 under the ALA Boxing stable in Cebu City, Philippines, running his record to 15-0 before suffering his first loss in 2015, a seventh round stoppage to Tsuyoshi Tameda in Japan. The setback caused Bernaldez to take three years off, working as a personal trainer before he reached out to Manangquil about making a comeback. Growing up in Butuan City, Agusan del Norte, Philippines, Bernaldez is the youngest of seven children born to a mother who worked as a barangay, or village, councilor, and a father who was a lay minister in the local church and farmed on the side. Though his aunt is a mother superior and his sister is a nun in the same congregation, he saw his ambitions being away from the pulpit.

“I started boxing at the age of 14 when I saw my cousin fighting. I spoke  to him and I said I want to fight in the ring like him, so I trained in the gym and started to fight,” said Bernaldez. “I am so happy cause  I am here now at the big stages.”

The consecutive fights for Sanman fighters have been a source of joy for his promoter and gym mates back home in General Santos City, who had been on a hard lockdown for several months due to the coronavirus pandemic. Some had stopped training and gone back home to their province after boxing action paused in the country, while the rest were stuck in their living quarters at Sanman Gym, unaware of when they’ll be able to earn another purse.

When Plania pulled off the upset, dropping Greer twice in the process, Manangquil and the fighters celebrated in the gym with a bottle of Johnny Walker Black, his victory providing a momentary reprieve from their woes.

Bernaldez hopes to give his gym mates and promoter another reason to pop a bottle on Thursday night.

“It will be great and big impact in my life [if I win] because it will definitely change my life, and it will be a stepping stone for a bigger and greater fights,” said Bernaldez.

“I dream to be a world boxing champion some day.”