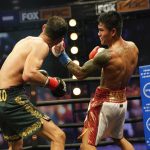 When Jose Haro withdrew from his bout with Mark Magsayo and was replaced by Rigoberto Hermosillo three weeks before their PBC on FS1 main event, most expected Hermosillo to present a more difficult challenge for the unbeaten Filipino featherweight.

Hermosillo held up his end of the bargain but it was Magsayo who walked away with the victory, winning a split decision Saturday night at the Microsoft Theater in Los Angeles, Calif. to move to 21-0 (14 knockouts). Rudy Barragan turned in an indefensible scorecard for Magsayo of 100-90, which was not in the realm of believability, while another judge scored it 96-94 for Magsayo, while the third had it 96-94 for Hermosillo (11-3-1, 8 KOs), who loses his third straight.

The punch stats told the story of the fight: Magsayo threw the flashier punches but was far less busy, landing 136 of 417 attempts for a 33% connect rate, while Hermosillo, who was content to just wear his opponent down with activity, more than doubled his output at 856 attempts, with 181 connects for a 21% connect percentage.

For Magsayo, 25, of Dauis, Bohol, Philippines, it was his first fight with a new team of Hall of Fame trainer Freddie Roach, alongside his assistant and countryman Marvin Somodio, plus conditioning coach Justin Fortune. After one training camp at the Wild Card Gym, the athletic and explosive Magsayo looked more efficient than he typically does, stunning Hermosillo moments into the fight with a right hand to the chin.

Hermosillo, an aggressive southpaw from Guadalajara, Mexico, was slow to get started, and ate another right hand counter towards the end of the first that wobbled him momentarily, not unlike the way he was hurt early on in his first loss against Manny Robles III.

Those punches served as a wakeup call to Hermosillo, who began targeting the midsection of Magsayo, taking the single punches Magsayo would jump in with and then outworking him to the body once they got in close. The work to the midsection began to pay off as Magsayo moved his head less and was easier to find upstairs.

Magsayo began landing body punches of his own in round 5, which turned the fight around and opened Hermosillo up to punches to the head. Hermosillo showed he could take the punches one at a time, and would resume pressuring Magsayo immediately after he’d explode and look to rest.

Magsayo opened the eighth round with more body punching, and it paid off even greater in round 9, when it set up a pair of right hands to the head followed by a left that had Hermosillo out on his feet momentarily. Magsayo followed up with punches but none of them landed cleanly, and though Hermosillo hit the canvas, it was ruled a slip after Magsayo bumped him with his hip.

Roach sensed the fight was too close for comfort, and implored Magsayo to turn it up before the tenth and final round: “Give me the best three minutes of your life!,” Roach exclaimed. Both fighters came out throwing their highest output of the fight.

“Gary Russell, I would love to fight him. The thing is, we need a lot more work in the gym,” said Roach, who praised Magsayo for his power, saying he scores knockdowns “all the time” in the gym, but “he just wasn’t letting his hands go tonight. Mark Magsayo gets ready to fight as Freddie Roach and Marvin Somodio look on. Photo by Sean Michael Ham/TGB Promotions

“We’ve been working together for a while now but we need some more time and we need to connect a little bit better. He wasn’t following my lead.”

Magsayo, who was fighting for the first time since signing with Manny Pacquiao’s MP Promotions, is ranked in the top 15 by the WBA, WBC and IBF. MP Promotions President Sean Gibbons tells The Ring that Magsayo’s right hand is “a little banged up” but doesn’t require immediate medical attention. He plans to bring Magsayo back in action by January or February, and sees the rough night as a positive for his development.

“Everything he’s gone through in the last few years, he’s never fought a real fight,” said Gibbons. “Mark was put into the oven, put into the fire and he bit down and got the W.”

Paul Kroll (8-0, 6 KOs) survived the first serious test of his pro career, defeating the crafty Lucas Santamaria (11-2-1, 7 KOs) by unanimous decision. The result may have been fair, but the scores were ridiculous, as Lou Moret and the aforementioned Barragan only found one round to give to Santamaria at 99-91, while the third score of 96-94 is more in line with someone who had actually seen the fight.

From the outset, Santamaria of East Los Angeles found ways to befuddle Kroll of Philadelphia, switching stances and throwing at odd angles, while showing a strong beard to walk through Kroll’s singular counters to land punches of his own. The most effective punch of the entire fight came in the second, as Santamaria countered a missed uppercut by Kroll with a left hook to the body, which immediately produced a grimace on Kroll’s face and forced him to retreat.

Kroll, who won the U.S. Olympic trials at welterweight in 2016 but didn’t qualify for the Rio Games, was able to turn the fight around late with his counter uppercuts and crosses.

The Barrientes twins, Chavez and Angel, both heard the scorecards for the first time in their brief pro careers, remaining undefeated against determined opponents in their U.S. debuts. The Honolulu natives were born to a Mexican father and Filipino mother, and had both of their first two fights in Mexico due to being underage when they turned pro last November.

Both are giant junior featherweights at 5’11”, had graduated high school in May, and turned 18 in August, clearing them to pursue their careers in their home country. Chavez (3-0, 2 KOs), the elder brother by 13 minutes, outpointed a tough Ivan Varela (3-3, 1 KO) by unanimous decision. The scores – 60-54 on two cards and 59-55 on the third – did not tell the story of how difficult Varela was to figure out. Varela, a natural southpaw, switched between stances to rough Barrientes up on the inside, particularly to the body. It wasn’t until the final two rounds, when Barrientes was able to use his range to box from a distance and avoid exchanges in close, that he pulled away in the fight.

Angel Barrientes had his own issues to overcome against Fernando Ibarra, winning by scores of 59-54 across the board. Barrientes lost a point, but was able to put his punches together better, which made the difference.