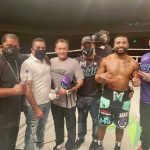 Reyes dropped Rodriguez twice en-route to a fourth-round stoppage on Thursday evening to move to 13-0 as a pro.

The bout served as the main event of a Roy Jones Jr. Boxing Promotions card at the Civic Center in Biloxi, Mississippi.

Reyes failed to make weight for their welterweight contest on Wednesday, tipping the scales at 150.25 pounds, but ultimately it didn’t matter.

The 24-year-old Reyes (13-0, 11 knockouts), of Tampa, Florida, who won three national titles representing the United States as an amateur, got the action going early in round 1 by knocking Rodriguez into the ropes with a hard left hand.

Rodriguez (13-9-1, 5 KOs), 23, of Mexico, missed with very wide shots in the third frame, and Reyes was patiently looking for a spot to counter.

In round 4, Reyes found that spot, exploding with a huge right hand over the top of Rodriguez’s lazy left jab to send his man to the canvas.

Rodriguez rose to his feet but on shaky legs. Seconds later, Reyes was all over him again, connecting with three straight clobbering right hands, and knocked him down again.

It took a little longer for Reyes to finish the job, as Rodriguez valiantly tried to hold on, but he eventually got the stoppage as his man was not firing back.

With his latest knockout win, Reyes improved his consecutive KO streak to eight.

Rodriguez has lost three of his last four bouts.

A nine-month layoff was no issue for unbeaten junior welterweight Michael Williams Jr.

Williams scored a second-round knockout of Thomas Miller with a right hook to the body.

In a sloppy fight that saw Miller warned for UFC-style techniques and excessive holding from referee Keith Hughes, Williams put that to rest in round two of their scheduled eight-round affair with pure boxing superiority.

Williams (13-0, 9 knockouts), who is trained by Jones, badly hurt Miller with a clean right hand to the body and saw the pain in his eyes. Seconds later, the 21-year-old from Fayetteville, North Carolina, teed up a right hook to the body and sent West Virginia’s Miller (6-4, 3 KOs) down for the full 10 count.

Prior to Thursday’s win, Williams last fought in December 2019, when he knocked out Keasen Freeman in two rounds.

It was a short night for junior welterweight Tyler “Short Fuse” Tomlin.

Tomlin knocked out Gabriel Gutierrez with a left hook to the body to keep his unbeaten record intact.

The 20-year-old Tomlin has fought four times in 2020, with two victories coming by way of knockout.

All three judges scored the fight a shutout, 60-54,  in favor of Garcia.

Garcia hurt Guido with about a minute remaining in the opening round with a left hook to the body.

By the fourth round, Guido’s right cheekbone was swelling significantly, resulting from Garcia’s solid right hands.

Garcia briefly rattled Guido early in round five with a pair of clean straight right hands that knocked him back.