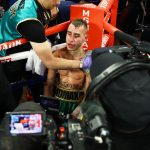 Maxim Dadashev was rushed to an area hospital after being stopped following the eleventh round of his fight against Subriel Matias on Friday night.

The fight, which took place at the MGM National Harbor in Oxon Hill, Md. as the co-feature to the Teofimo Lopez-Masayoshi Nakatani main event, had become more one-sided as the rounds progressed. Dadashev’s trainer James “Buddy” McGirt pleaded with his fighter in the corner to allow him to stop the fight.

“I’m gonna stop the fight…Max, you’re getting hit too much…Please Max, let me do this…If I don’t, they’re gonna do it,” were the exhortations from McGirt in the corner.

Dadashev, who entered the fight unbeaten at 13-0 (11 knockouts), protested his trainer’s request, before McGirt took things into his own hands and informed the referee that they wouldn’t answer the bell for the twelfth.

ESPN’s Bernardo Osuna reported afterwards that Dadashev was taken to Washington Adventist Hospital, which is about 17 miles away from the venue. An attending physician told Osuna that Dadashev was “severely concussed” and “severely dehydrated”, and that a neurologist was waiting to treat him once they arrived.

A few minutes later at a second update, Osuna reported that Dadashev, who had been initially responsive in the ambulance, had lost consciousness, prompting the ambulance to re-route to the closer UM Prince George’s Hospital, which is about 12 miles away.

Osuna later reported that Dadashev was heading into surgery because “swelling has been so great that they need to bring that down.” He added that medical staff was trying to contact Dadashev’s wife Elizabeth in Russia to determine if he has any allergies or history of brain injury.

Dadashev, 28, of Saint Petersburg, Russia remained on his stool for several minutes, speaking with the commission doctor, before being allowed to leave the ring on his own power. Things turned grim when Dadashev’s legs began to buckle on the ring steps, but a stretcher wasn’t brought out until Dadashev had walked through the crowd, assisted by his cornermen. Once the stretcher was set up, Dadashev began to vomit, a common sign of brain injury, bringing greater urgency to the matter.

The scene “bothered” former world champion and ESPN commentator Timothy Bradley, who asked “Where was the medical attention when he was walking out? He should have never left the ring walking.”

The fight was an IBF junior welterweight eliminator, with Matias (14-0, 14 knockouts) of Fajardo, Puerto Rico using his body punching early on to wear down Dadashev, leaving him vulnerable to the head punches upstairs.

“I hope that Maxim is alright,” said Matias. “He is a great fighter and a warrior.”

The post Maxim Dadashev rushed to the hospital after TKO loss to Subriel Matias appeared first on The Ring.