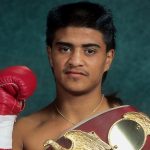 Excuse Michael Carbajal for getting a slight bit emotional when he thinks back on his Hall of Fame career. It happens occasionally to the all-time junior flyweight great from Phoenix, Arizona.

It was Carbajal (49-4, 33 knockouts) who informed American fight fans in the late-1980s and throughout the 1990s that little guys can fight. He held the 108-pound IBF, WBC and WBO titles, and went 8-4 against 10 world champions or titlists during his 10-year career.

The 1988 Olympic silver medalist is 53 today. He owns Michael Carbajal’s 9th St. Gym, located in Phoenix, Arizona, and runs it with the help of his wife, Laura.

Michael fills his days still committed to the sport that launched him to stardom. He works with young kids, teaching them the nuances of boxing—stressing to them a simple message: “If you don’t love it, you won’t be any good.” He was inducted into the International Boxing Hall of Fame in 2006—and it was only fitting that he went in with his rival, Humberto “Chiquita” Gonzalez, who won two of the three classics in which they engaged.

“I still train hard,” Carbajal said. “I never stopped training. I’m still healthy and I make and drink my own juice every single morning. I work with kids and they always want to get into the ring on the first day.

“I don’t allow it. They have to learn first. You can have a kid with so much, but once you put them in the ring, it’s a whole different. I stress to the kids that should work on being a champion in life—and believe in yourself.

“If you don’t have confidence and have a ton of talent, that talent won’t help you.”

After his last fight, Carbajal went over to console a dejected, weeping Jorge Arce.

“When I go and look back at everything, it makes me get emotional,” Carbajal said. “Anyone I got in the ring with, I wanted to kick their ass. That was it. You can’t do anything unless you believe in yourself, and I believed in myself.

“I still stay in touch with Chiquita. People still approach me about those fights, and it’s great to be remembered.”

“This was a big fight for me, not only because it was on the Roberto Duran-Iran Barkley undercard, but because it was a really tough fight in my professional debut. Will Grigsby turned out to be a really good fighter, but we didn’t know. He was 1-0 at the time and I was fighting on the undercard of Duran, who was my idol growing up. So, I was way excited. The other 1988 Olympians like Kennedy McKinney and Ray Mercer had their pro debuts, too. I know I had the toughest fight. I include this fight because it started how my career went. I found out what pro boxing was about. Throughout my amateur I had a pro style. I was all about turning pro. I wasn’t looking at the Olympics or the Pan-Am Games.”

“Tony DeLuca had a lot of experience. I knew if I could win this title, I was in for a world championship. It was a great win for me. It wasn’t a difficult fight, to tell you the truth. He was very cautious. He didn’t fight like he talked. I watched his previous fight and I told everyone that he’s perfect for me. I thought he was going to come at me, and come at me, and he was going to fight. But once he found my power, that was it. It became an easy fight. He was just too cautious. He didn’t want to mix it up. He didn’t want to do any of that. I thought DeLuca was going to put pressure on me. That’s what I wanted. I wanted him to fight the way that he really fought. That’s the fighter I saw on film. He was really aggressive. If he came at me, that fight would not have lasted the 12 rounds. That wasn’t a real exciting fight, but because it was for the NABF fight, I would include it among my top six.”

“This was my 14th fight and my first (NABF) title defense. He had a lot of experience, and I loved that. I always wanted to fight the best. A lot of fighters now a days are all about fame and fortune. I was never about that. I mean never! That even bothers me to this day. Everyone wants that. Everyone wants to be famous and win lots of money. I tell the young kids in my gym all of the time that you have to love what you’re doing. You have to love to fight. You gotta love boxing. You have to love it to be good at it, because that enables you to place your whole mindset into it. That’s when you’re able to say to yourself, ‘I don’t care who they put in front of me, I’m wiping his ass.’ I tell the kids that. I want them to know that they want to come in and jump right in the ring. I put them in the ring first, they’re not coming back. Beating Martinez had a lot of experience and that told me how good I am. That was a tough fight and loved that fight.”

“Kittikasem was tough. He was the hardest puncher I ever faced. This guy when he hit you it stung, it hurt. He was strong. He was a whole lot better than I thought he was coming in. Not only that, the reason why he was so tough was because he was already fighting Muay Thai. He had 10 years of experience fighting Muay Thai before he won a world boxing title. He was big, for a junior flyweight, and strong. For me, it’s my biggest victory. When I was five, six years old, my dad reminded me as I started fighting. He told me that I said that one day I would be a world champion and retire being a world champion. That fight against Kittikasem was my greatest. It’s the first time that I won a major title.” “Chiquita didn’t talk a whole lot of s—. The only thing that he told me before the fight was, ‘Hey Michael, don’t run from me.’ And I go, ‘What makes you think that I’m going to run from you? We’ll see when we get in there.’ He came in and we had a high-level war. I told him, ‘I love this. I love it.’ He knocked me down in the second round with the straight left hand. It was a flash knockdown. I wasn’t hurt. He caught me, and caught me good. I got up really quick and told the ref that I was alright. I went back to my corner and told them I was alright. I knew he was going to come at me, and come at me real strong. I came back in the third round, the fourth round. We were bombing away. We knew what we were doing. We were studying each other. I’m thinking, ‘What I’m going to hit him with? What I’m going to do when he does this or that?’ The fifth round came and he had me against the ropes. We were throwing. Chiquita was lefthanded. He caught me with the right hook. I said ‘Woo!’ All I knew was that I was down again. I didn’t feel the punch at the time. When I hit the floor, I was like ‘Damn, I’m down again.’ And you see me hit the canvas. When I got up, I still couldn’t feel my right leg. I knew he was going to come at me again. When he came at me, I threw a left hook. He was going to throw a whole of punches, because he knew that I was hurt. I was throwing short shots. He was throwing wide shots. When I watched him on film, I already knew that. I was going to catch him with some short, real sharp punches. He was all over me. Once I started to feel my right leg again, I said to myself, ‘You’re mine now.’ I boxed a little bit in the sixth round, still getting my senses together, and he kept coming at me. That was good. I knew I was going to catch him. I knew I was. When I started feeling my strength coming back, I said, ‘This is it, I’m going to catch him.’ He hurt me in the sixth round again. He didn’t know that, but I did (laughs). He wore himself down. He was tired. I told my corner “I have his ass now.’ It’s when I started coming forward and I had him against the ropes. I hit him with a short right hand that wobbled him, and followed that with a left hook right on the button. I ducked after the left hook, and tried to hit him with an uppercut, because I saw him going over my shoulder. I missed, but he fell face first. The ref told me to go to the corner, I thought to myself, ‘He’s not getting up.’ I was shaking my head to my corner. He didn’t get up and I started jumping up and down. For everyone else, that’s my greatest victory. It’s the fight everyone always reminds me about.”

“I retired for a year after (losing on cuts to Baby Jake) Matlala (in 1997). I was disappointed. If I couldn’t beat ‘Baby Jake,’ I might as well retire. He couldn’t punch. I was cut up. Both of my eyes were cut. I’m not going to put down Matlala, but he could not hit hard. Not to open two cuts like that. They were head butts. I fought Matlala the wrong way. I could have stood on the outside. I was cracking him to the body, and he was grunting. I thought I would stop him with a body shot. I stayed inside, because I was hurting him. After the 10th round, the ref told me that he was going to stop it. I was really disappointed. I give Matlala all of the credit in the world. He beat me. I did not want to go out that way. I wanted to retire around 31, 32. I wasn’t going to be able to handle these young kids, and that came with Arce. I couldn’t handle the speed. I’ve never been knocked out in my career—amateur and pro. For me, that’s great. I was stopped on cuts by Matlala, but never knocked down. Arce was beating me. He was quicker than me. He was throwing faster combinations than I was. I knew I was going to catch him. I was hitting him with the right. Arce was taking it—and he was a good little fighter. I caught him with the right in the fifth, and knocked him down. He got back, and he came back and won the rest of that round—and the other rounds, too. In the 11th, I knew I had to knock him to win. I knew I was losing. I was calm. I didn’t go out wild. You have to be precise when you punch. I caught him again in the 11th and I thought I had him. He couldn’t stand. When the ref saw him fall back, and stopped it, I started jumping and down. I already knew I was going to retire. I thought to myself, ‘I wanted to retire with a world title.’”

The post MICHAEL CARBAJAL: THE GREATEST HITS appeared first on The Ring.