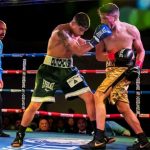 The eight-round bout will take place at the Omega Products International in Corona, California and will headline a three-bout “3.2.1 Boxing” card that will be streamed live on Thompson Boxing’s Facebook and YouTube pages and on ThompsonBoxing.com (7 p.m. ET/ 4 p.m. PT).

Dutchover (14-1, 10 knockouts) last fought on July 26, defeating southpaw Jorge Marron, Jr. by unanimous decision. That victory, which also took place in Corona, was Dutchover’s first fight since losing by technical knockout to Thomas Mattice in his hometown of Midland, Texas on September 20.

Now living and training in the Los Angeles suburb of Santa Fe Springs, Dutchover is confident that he can get back in the mix of a very competitive lightweight division.

Mendez (16-7-3, 11 KOs), who resides in Colton, California, lost by unanimous decision to unbeaten Julian Rodriguez in his last bout on December 14. The 30-year-old has lost his last five fights.

The Dutchover-Mendez fight will be the third installment of Thompson Boxing’s “3.2.1 Boxing” card, which has showcased many of their young talents.

Matchmaker Alex Camponovo has been impressed with the performances thus far and the quality of the fights.

“It is great to be back with this installment of ‘3.2.1 Boxing,’” said Camponovo, who is Thompson Boxing’s general manager and creator of the ‘3.2.1 Boxing’ concept. “We are working tirelessly to make this an enjoyable night of boxing for the fans watching at home or wherever they are. We expect fireworks and another memorable night of fights.”

In the co-feature, Richard Brewart Jr. (7-0, 3 KOs) of nearby Rancho Cucamonga will square off against Louis Hernandez (8-0-1, 6 KOs) of Jackson, Mississippi in a six-round junior middleweight bout.

Opening the card will be a four-round bout between junior featherweight Alexis Alvarado (1-0, 1 KO) of La Puente, California and Lazaro Vargas of Indio, California, who will be making his pro debut.

The post Michael Dutchover-Manuel Mendez set for November 1 in Corona, California appeared first on The Ring.